World of Coca-Cola – It’s All About the SECRET!

I think everyone in the world knows Coca-Cola.  Everywhere I’ve ever been Coke’s been there.  I think it’s one of the things that links the world.

It’s prominent place in pop culture has cemented it into our lives.  I’m fairly sure we all have had our very own “coke moments”.

Last month I visited my daughter Jenny and her family in their Dacula, Georgia home.  My grandsons wanted to visited the Word of Coca-Cola, their friends had told them all about it.  So on the last Saturday of my visit we drove to the city to spend a few hours at the World of Coca-Cola.

I think we all know that Coke is a master advertiser and we knew that entering the World of Coca-Cola was entering a world where we’d be bombarded with everything Coca-Cola, that is after we paid the admission price ($16 for adults, $12 for kids 3-12, kids 2 and under are free).  Was it worth the price of admission?  Absolutely! 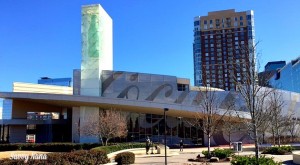 It’s also a fun place to spend a couple of hours.  It’s not Disneyland, but for the $16 ticket you and the kids will be entertained and your thirst for Coke will definitely be quenched.

You can buy your tickets online or at the ticket booth.  You’ll find an information booth in front of the ticket counters, in case you have any questions. 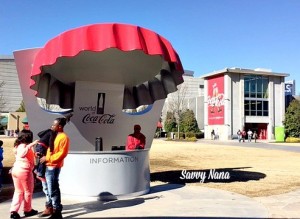 Once you purchase your ticket you will be given a map and then you must go thru security.  Past security you’ll find yourself in a lobby where you can pick up your free aluminum bottle of Coke. 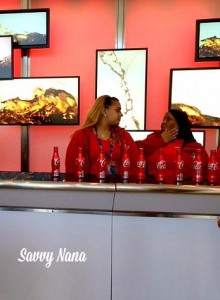 From here you are led into The Loft, a room where you’ll be surrounded by Coca-Cola artifacts dating back from 1896.  A Coca-Cola Ambassador will be there to share highlights of the memorabilia and usher into the Coca-Cola Theater. 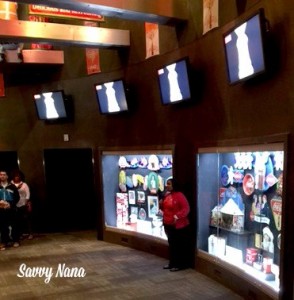 Once in the theater you’ll be shown a film called “Moments of Happiness”.  It’s really a 10 minute Coca-Cola commercial, but it’s really good! But then we all know and love Coke commercials!  It’s a spin around the world that, like its title hints highlights moments of happiness like a soldier’s surprise return from Afghanistan and a man proposing to his girlfriend on board a hot air balloon.  I know it brought tears to my eyes!  My daughter said it made her teary eyed as well, and I noticed quite a few more teary eyed folks on my way out.  It was a very moving flick!

From the theater you enter the heart of the World of Coca-Cola, where most of the activities and exhibits are dedicated to Coke’s history and of course the legendary secret formula!  You enter  on the first level where you’ll find many attractions and exhibits.

The Vault is and interactive and multimedia exhibit that talks about the secret recipe.  You’ll learn how the company has kept the formula a secret for over a hundred years.  You’re ultimate goal is to reach the Chamber of the Secret Formula where you’re told the secret is actually kept.  But do they reveal the secret?  I’ll let  you find out for yourself! 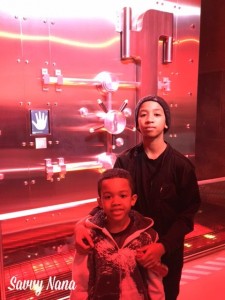 Next to the Vault you can go thru the Milestones of Refreshment exhibit where you will learn who created this world renowned beverage and what happened thru the ages.  It’s actually quite interesting.  Great knowledge for future trivia games!  Bet you didn’t know  that Atlanta pharmacist John S. Pemberton created this soft drink in 1886?  And that Asa Candler becomes the sole owner of the Coca-Cola company for the total invest of $2300? 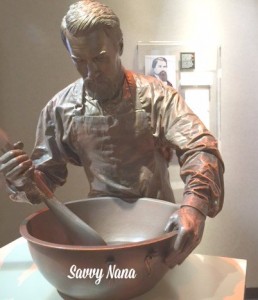 From there you can proceed to Bottle Works for a behind the scenes look at Coke’s bottling process.

You can see the Coca-Cola Polar Bear in the middle of the first floor.  You can have your photo taken with him.  Photos can be purchased at the end of your visit at the gift shop. 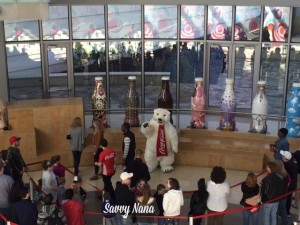 Once your done with the first level head on up to the second where you’ll find the 4D theater.  There you’ll go on a worldwide adventure in search of the Secret Formula. 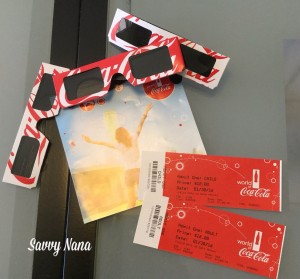 You’ll find the Pop Culture Gallery up there too.  You can see Coca-Cola artwork including a work by Andy Warhol.  There are interactive activities here as well including writing you’re own “Coke Story” and designing a virtual Coca-Cola bottle. 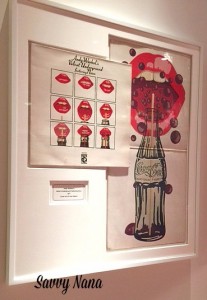 The Perfect Pauses Theater is here as well.  You can sit down and watch the films highlighting the best Coca-Cola commercials thru the ages and around the world.  We pretty much skipped this as the Taste It! area beckoned!

The Taste It area was really where the boys wanted to be.  It’s where you can sample over 100 beverages from around the world to your heart’s content.  The main room is divided into 5 geographic stations – Africa, Asia, Europe, Latin America, and North America.  Each station has a fountain that offers different beverages unique to the area, such as the Beverly from Italy. 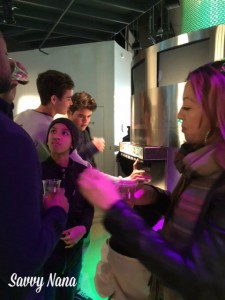 On one end of the area is an exhibit dedicated to Coca-Cola beverages.  Here you’ll find Coke, Diet Coke, Coke Zero, and more.  You’ll also find Coca-Cola Freestyle machines where you can add your favorite flavor to your Coke.  I love this machine!  My favorites are Diet Coke with Lime and Diet Coke with Lemon! 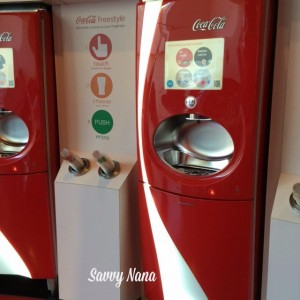 The Taste It room pretty much marks the end of your tour.  You exit into the gift shop, you had to have seen that coming!  But before you exit don’t forget to grab a bottle of Coke from the conveyor belt!  The nice staff member will give you a plastic bag to take it home in! 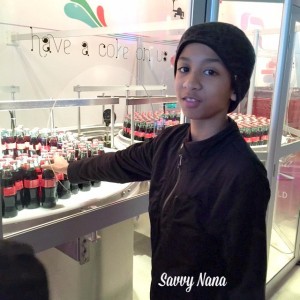 Of course we just had to go thru the gift shop.  It sells everything you could ever want with a Coca-Cola logo!  We found it a bit pricey on some items, but when we found the clearance section we racked up!  We got some cool T-shirts for $7.99 and boxers for $4.99!  We also got mugs ($8.95), giant Coke bottle bank ($15), and a sequined dog collar ($8.95 – got it because it would look gorgeous on my Huskie, not because it’s from Coke!). 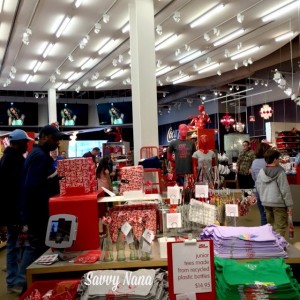 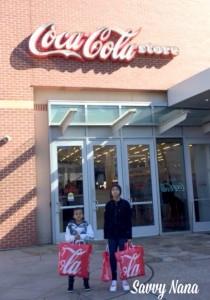 The tour took us just a bit over 2 hours, by then we had to drag the boys away from the soda fountains.  What was lacking in the building was a snack bar or cafe, and after all that sugar we had to feed the boys!  They recommend the Pemberton Cafe located steps away from the store exit.  There are also restrooms located next to the cafe, in case you need one after tasting all that soda!  (There are restrooms by the Taste It area)

We headed for the cafe for a snack and found it overpriced with terrible food.  The service was fast and friendly though.  We had hot dogs, nachos, and drinks.  The hot dog bun was stale as were the nacho chips. Sandwiches were $10, burger and hot dogs $9!  It wouldn’t have been so bad if the food was at least decent.  There are many other places to eat in the area, next time we’ll opt for a different place to have a snack. 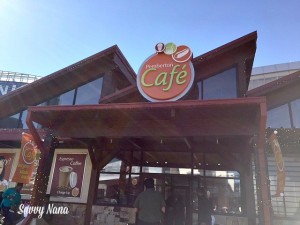