Travel With Kids – 5 Tips on Choosing the “Best Seats” 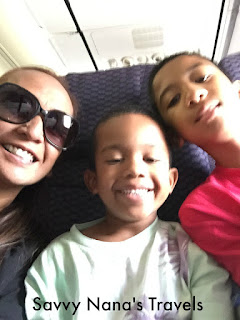 Last week I flew on United Airlines from Honolulu to Houston with my 2 grandsons, Dion and Devon.  Both kids are seasoned travelers, they’ve been flying all over the world with us since they were infants.

This trip we weren’t able to get on the direct HNL-IAH flight; we had to stop in LAX to change flights.  I prefer the direct flight when I’m traveling alone or with my husband, but with kids a stopover is not such a bad idea.  A short stopover keeps the boredom away, lets kids stretch their legs, work off built up energy, and allows you to grab a quick meal or snack before catching the next flight.

The longest leg of this trip was the 5 hour flight from Honolulu to Los Angeles.  Luckily the flight wasn’t full and the kids were able to snag a row of 5 seats on the wide bodied 777 plane and  slept comfortably through out the entire flight.  The second leg to Houston was on a smaller plane where passengers are seated 3 to a row on either side of the aircraft.  This flight was just about 3 hours and we had great seats.  I realized that choosing the “right” seats when you buy tickets helps ensure that you have as comfortable a flight as possible.  This is really important when traveling with kids.

Of course the most obvious seating choice when traveling with children is seats that are together, specially when you have very young children, but this last flight made it very obvious that choosing the right seats makes the difference between sitting together or sitting together comfortably.  This point was driven home by the mom and her 2 children seated behind us; my grandsons stretched out across 5 seats and slept comfortably while the other 2 kids slept fitfully sitting upright in their seats.
Their seats were an aisle and 2 middle seats in the row of 5 with passengers occupying the remaining 2 seats.  I opted for an aisle and window seat and the aisle seat across, luckily no one occupied the remaining 4 seats and my grandsons were able to sleep soundly on them. 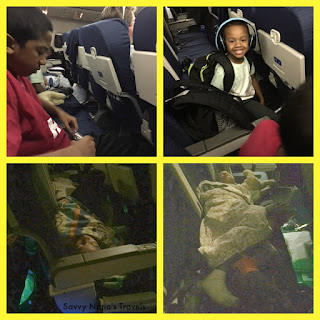 When choosing the “best seats” I always make sure we have at least one window and several aisle seats, even if we have to sit in different rows.  It works when traveling with older kids who will be alright sitting apart and increases the chances of the seats next to you remaining unoccupied on flights that aren’t sold out.  Should the flight be sold out and the kids decide they want to be seated together it’s much easier to trade a window or aisle seat than a middle seat, very few people like to sit in the middle seats and will jump at the chance to trade for a window or aisle one.

My strategy doesn’t work all the time and doesn’t guaranty that the seats next to you will remain unoccupied when the plane is full, but it works often enough when the plane isn’t sold out.  So far it’s worked for me on the all flights I flown this year.  In my opinion having a row to yourself is almost as comfortable as flying business or first class, of course you don’t get the perks, but you do get more space without paying the first class fare.

Here are a few tips to help you choose your seats on airlines that allow you to pre-select seats before departure.  Some airlines, such as Southwest, don’t give passengers this option, but most do when buying tickets online.  Obviously seat choices will vary by aircraft and depends on how many are traveling, and whether your group is odd or even numbered.

*  On Boeing 767, A330, and similar wide-bodied aircraft where the seating is 2-4-2 or 2-5-2 choose Window & Aisle seats together for even numbered groups.  For odd numbered groups choose Windows & Aisles  an Aisle seat across for the odd person.  Better yet seat two people from your group on the aisle seats of the row that seats 4-5 passengers, there’s a decent chance that the seats in between will remain unoccupied on flights that aren’t fully booked giving you more space that will allow you to lie down across the seats and sleep.

*  On smaller aircraft where there are just window & aisle seats choose an aisle seat for the kids and the aisle seat behind them for the odd adult person.  It makes supervising the kids easier during the flight, you won’t have to disturb anyone every time you get up to check on the kids.

*  On many Boeing 777 and similar wide-bodied planes and on the smaller planes like the Boeing 737 the seating is 3-4-3 or just 3(window, middle, aisle) on each side of the plane.  Choose 3 seats together and an aisle seat across if you need an extra seat.  If the plane doesn’t look like it will fill up choose  window & aisle seats leaving the middle seat vacant, there’s a big chance that the middle seat will remain unoccupied giving you extra seating space.  If the seat ends up being occupied I’m almost certain the occupant will willingly swap you for the aisle or window seat.

*  Choose seats either in the middle or in the back of the aircraft.  This increases the chance of having unoccupied seats next to you. 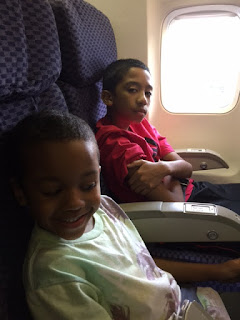 *  Do not choose EXIT row seats.  Children are not allowed to be seated at exit rows and if your seats are located there you will have to be moved.  If the flight is full it may mean changing seats that could be far from each other.
Again using this strategy will not guaranty that you’ll have vacant seats next to you, but I find that it does increase the chances of having unoccupied seats around you.  Obviously if the flight is sold out no amount of pre-flight seat planing will help.
Where ever you go this summer have a great and safe trip!
For more traveling with kids tips check out my posts Travel with Kids: Know Before You Go,
Packing for Your Trip,  and Air Travel With Kids.