Things to Do in Bari & Quick Train Guide 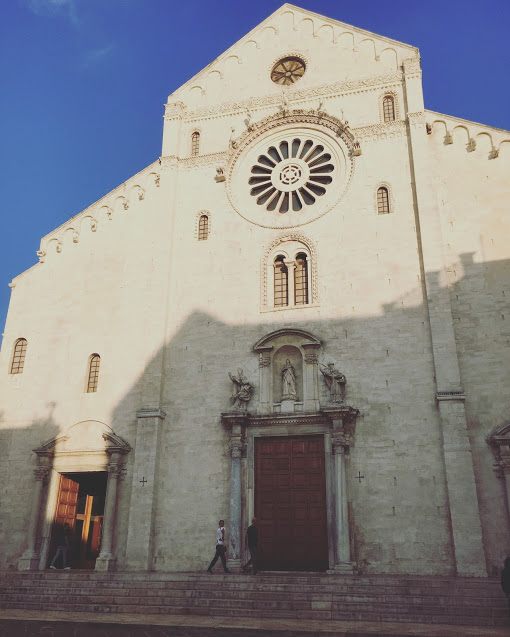 Bari  located in south eastern Italy, the part we fondly refer to as the heel of the boot, is the second largest city in the region.  It is a port city on the Adriatic Sea and the capital of Italy’s Puglia region.

To be honest there isn’t a whole lot to do in Bari, it’s not a major tourist destination.  However it is an ideal base for those who want to explore the Puglia and Basilicata regions.  It’s a major train hub with  trains heading to all the interesting places that one will visit.

But before I get to the trains let me first point out a few places of interest in Bari.  The city itself is like any large city filled with modern buildings, roads, and traffic.  Not exactly a place of great interest. 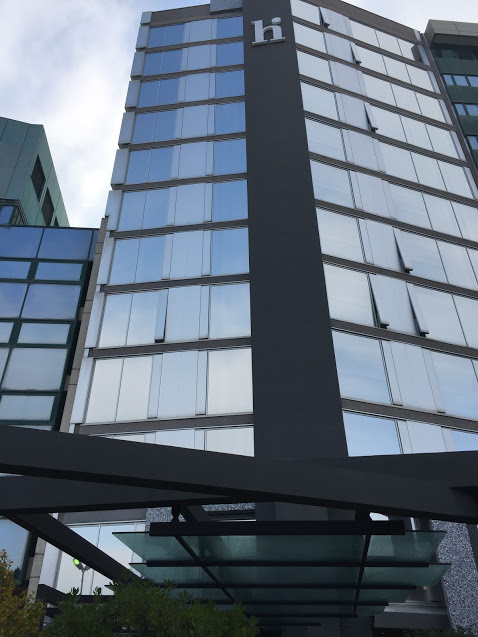 Last fall we headed to Bari and used it as our base to explore the surrounding areas.  We stayed in the Hi Hotel Bari which is situated in the outskirts of the city.  We chose this hotel over  those closer to the city center because it was newer and seemed to be in a safer neighborhood.  It turned out to be an excellent choice.  The room was spacious and came with lots of amenities including a buffet breakfast, in room coffee machine, 24 hour self service coffee and tea in the lobby, and even the use of bicycles. 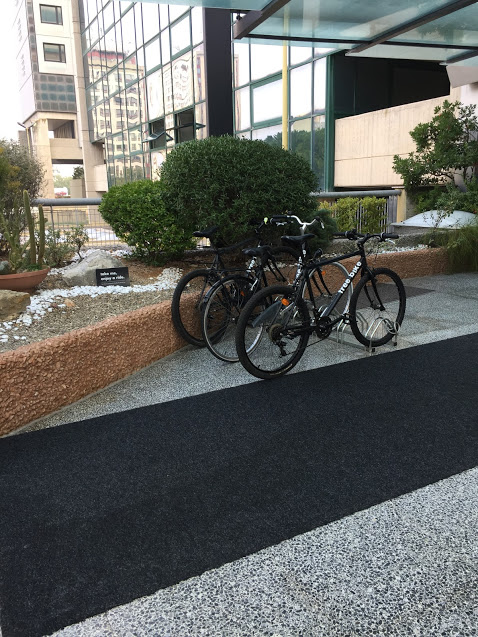 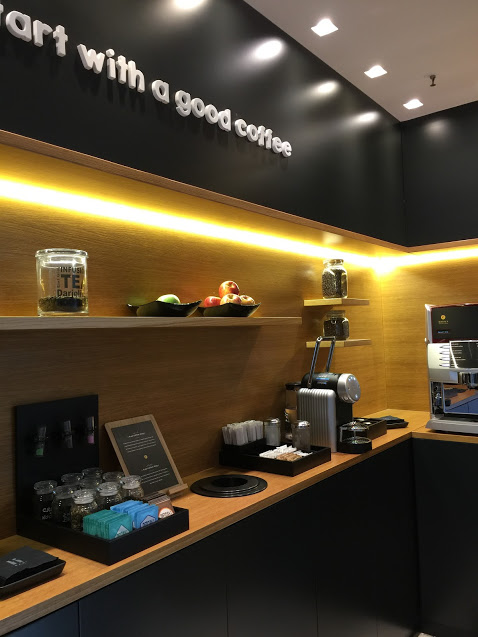 The only down side to this hotel is the distance to the city center and the train station.  It requires a short taxi ride that costs about €10 each way.  But since the room is less expensive than those in the hotels in the center of town the cost of the taxi isn’t a big deal.   And the friendly staff will happily call you a taxi anytime of day or night.

Anyway the major place of interest in Bari is a visit to the old town which is known as Barivecchia.  It’s a quaint little town with narrow winding streets, piazzas, and interesting architecture. 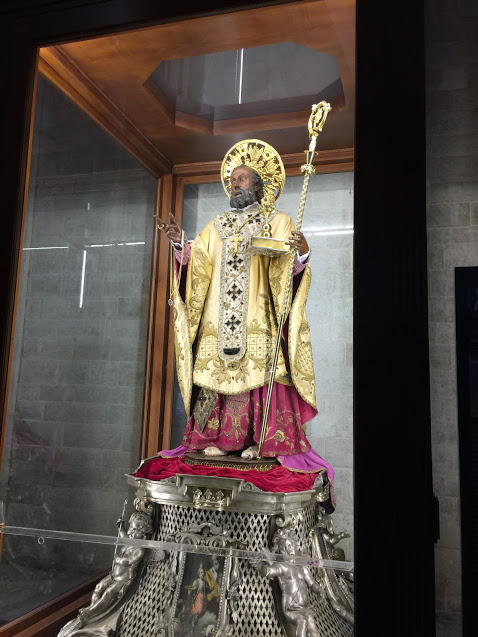 One of the highlights of the old town is the Basilica of San Nicola.  San Nicola, or Saint Nicholas, is the patron saint and the protector of Bari.  And yes that’s the Saint Nicholas who many of us know as Santa Claus. 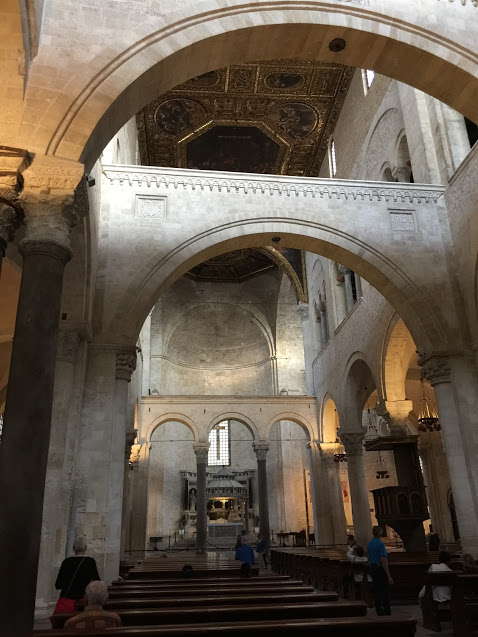 The classic Romanesque style Basilica was built in 1197.  It houses the bones of San Nicola in the crypt within the church.  It has a stunning gold painted ceiling, an amazing altar, and a collection of sculpture and mosaics.

The church holds wide significance throughout Europe and the Christian world.  It is a pilgrimage site for both Catholics and Orthodox Christians form eastern Europe.

This church stands proudly in the center of the old town on the harbor side of the citadel.   It is definitely worth a visit!

There are  other churches in the old town including the less popular Church of San Sabino. 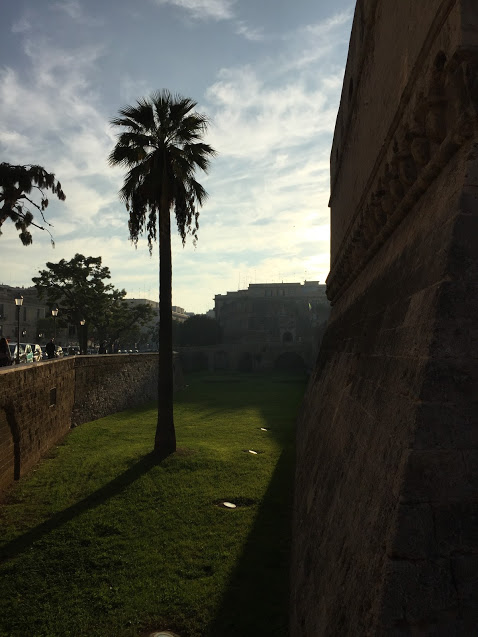 The Bari Castle is located west of the old town center.  It’s a Norman Castle built in the 1100’s and is in excellent condition with its original walls and towers, and a moat on 3 sides.

You can visit the castle and explore its passages, walk thru the central courtyard, and marvel at its fantastic architecture.  There are also rooms where you’ll find artifacts on display, and boards that has some history of the castle.

Its elevated location makes it a great spot from which to view the city. 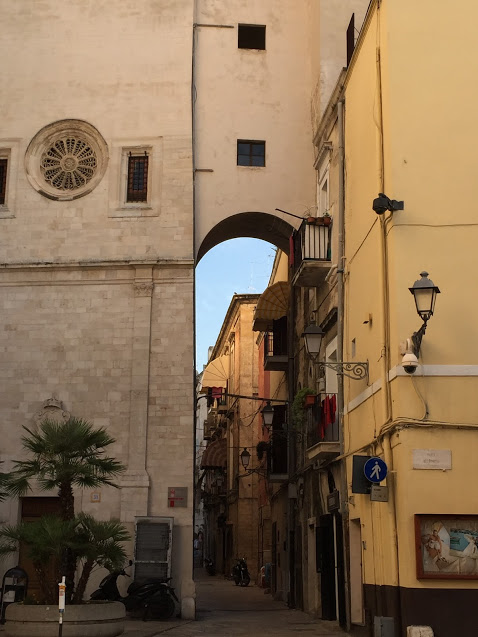 In my opinion the best part of Barivecchia is the town itself.

You can spend hours wandering the narrow streets.  You’ll find some delightful shops, cafes, and restaurants in the quaint buildings along the streets and in the piazzas.

Old Town Bari is alive with residents.  They live in the buildings within the city walls.  If you’re lucking you might spot one of the residents sitting by her door making Orecchiette.

It’s a pasta typical to the Puglia region.  It gets its name because its shape resembles a small ear.  Ear in Italian is Orecchio.  Don’t leave the area with out sampling this local specialty. 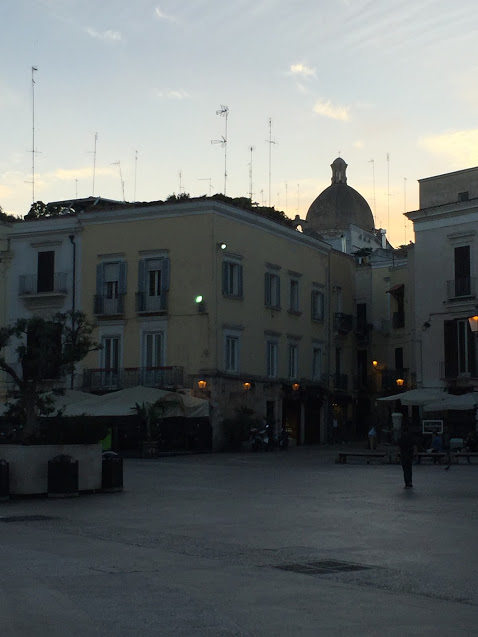 Piazza Mercantile is a delightful Piazza surrounded by quaint buildings, shops, and restaurants.

One corner of the piazza is dominated by the Colonna Infame, the infamous column.  This is where bankrupt debtors were taken for punishment and public humiliation. 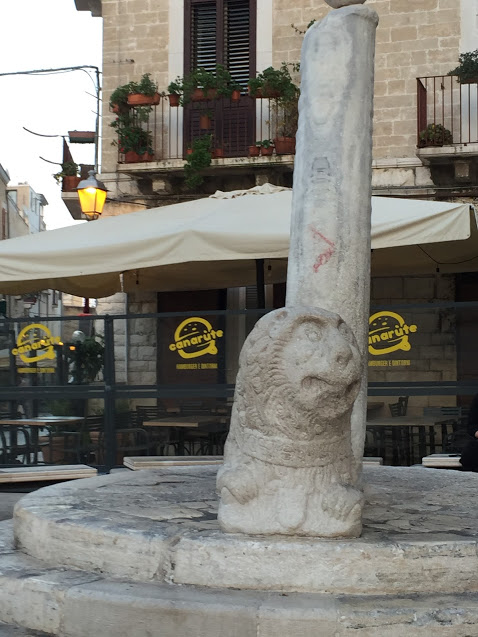 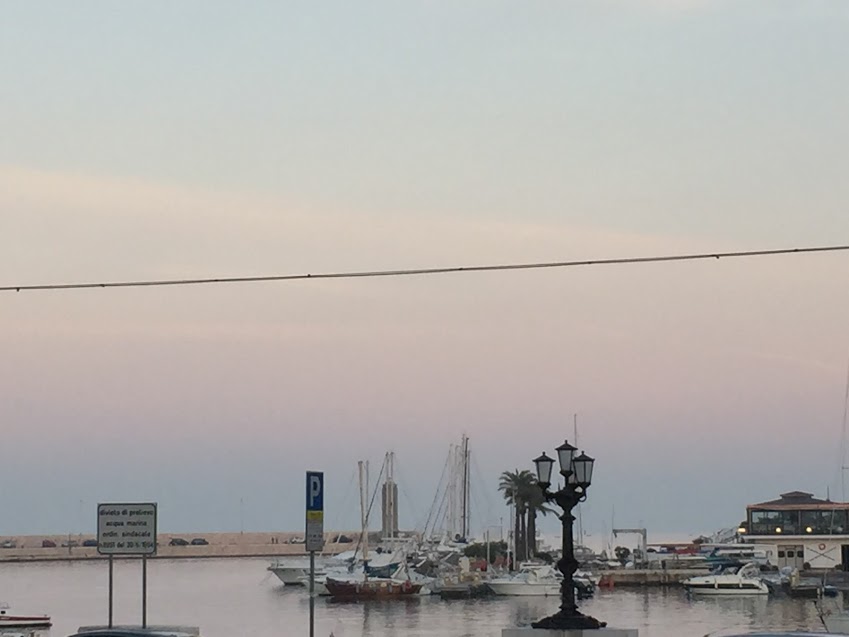 I did mention that Bari is a port city, so it stands to reason that the city should have an awesome promenade or corniche.  And it does!

The Lungomare Nazario Sauro is a walkway that stretches about 1000 meters along the coast.  It’s a great place for a stroll or to sit and contemplate the sea.

It’s also a great place to walk off all the pasta you ate at one of the restaurants across the street in the old town.

If you have the time and inclination to wander around Bari a bit more you might want to stop by the orange building you’ll find in the “new” section of the city.  This is the Teatro Petruzzelli, the fourth largest theater in the country.

In my opinion the old town is definitely worth a short visit, 2-3 hours is more than enough time to wander and explore.  But in our case we used Bari as our base and took trains to Alberobello, Martina Franca, and Matera in the Basilicata region.  There are many other places to visit including Ostuni, Locorotundo, and Lecce.  But we didn’t have enough time so we picked the 3 towns that were easily accessible by train.

Bari is serviced by 3 train companies; the state owned Trenitalia and Ferrovie Del Sud Est; the Ferrotramviaria; and the Ferrovie Appulo Lucane.  All three have their own stations, platforms, and tracks.  Each company services a different area although some routes do overlap.  You can catch all 3 trains at Bari Centrale, Bari’s main train station.

Trenitalia is the country’s main railroad.  These trains link towns and cities to each other.  Their trains include the high speed trains that link major cities like Rome, Milan, and Florence to each other.  The intercity trains link major cities to smaller towns, and the regional trains are the slow local trains that stop in most towns along its route.  You catch these trains in the main station.  Tickets can be purchased from the ticket office or machines located in the front as you enter the station. 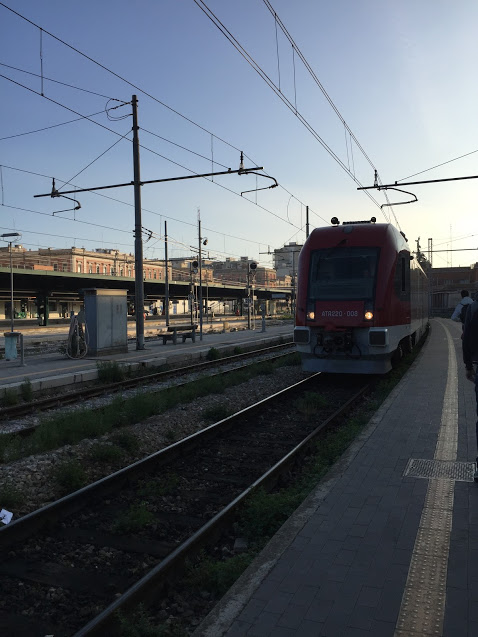 FSE trains and buses service the Puglia region.  It’s part of the state owned railroad.  These trains run on different tracks and are very slow.

The ticket office and tracks (there are 2) are located to the left of and  behind Bari Centrale.  To get there you must go to the left side of the main train station, to the stairway that takes you under the tracks.  You will see a sign at the top of the stairs. 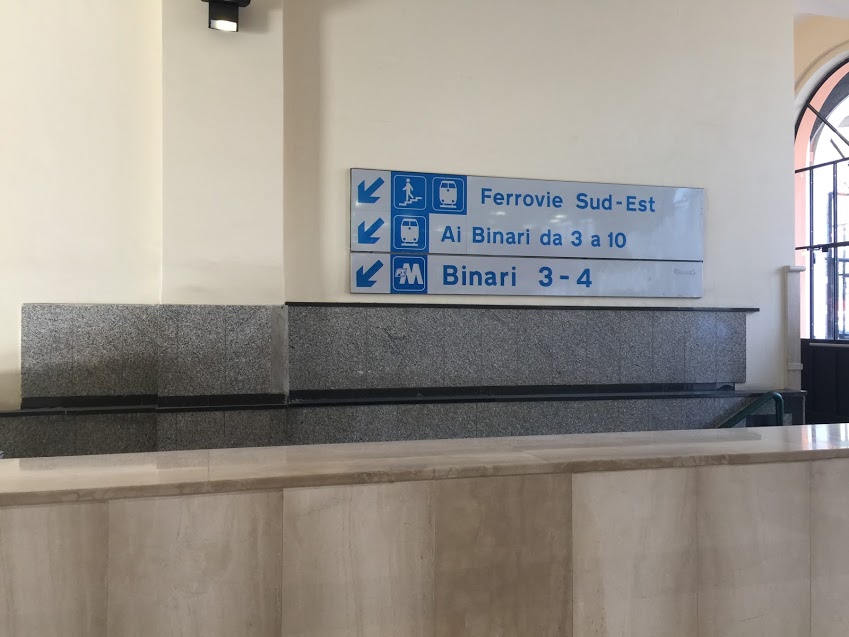 At the bottom of the stairs is a passage that takes you to Trenitalia tracks 3-10, and the FSE station and platform.  Access to this platform is located on the right side of the passage towards the end.  Go up the stairs and the ticket office will be on your left.

Tickets to Martina Franca cost €5.90.  Tickets between towns are €1.10.  These trains also go all the way to Lecce, but very slowly.

We took the 8:22 train to Martina Franca which was the last stop on that route.  The same train stops at Alberobello, Locorotunda, Castellana Grotte, and other small towns in the Itria Valley.  We got to Martina Franca at 10:20.   For directions to the city center of Martina Franca click here.

After rambling around the Baroque town we hopped on a train to Alberobello.  You can easily do both towns in one day.  You can even fit in Locorotundo if you have the energy!

Trains to Martina Franca and back to Bari run about every half hour.  There are no trains on Sundays.  Instead take the FSE bus from the FSE station.  Bus tickets are the same price  as train tickets. 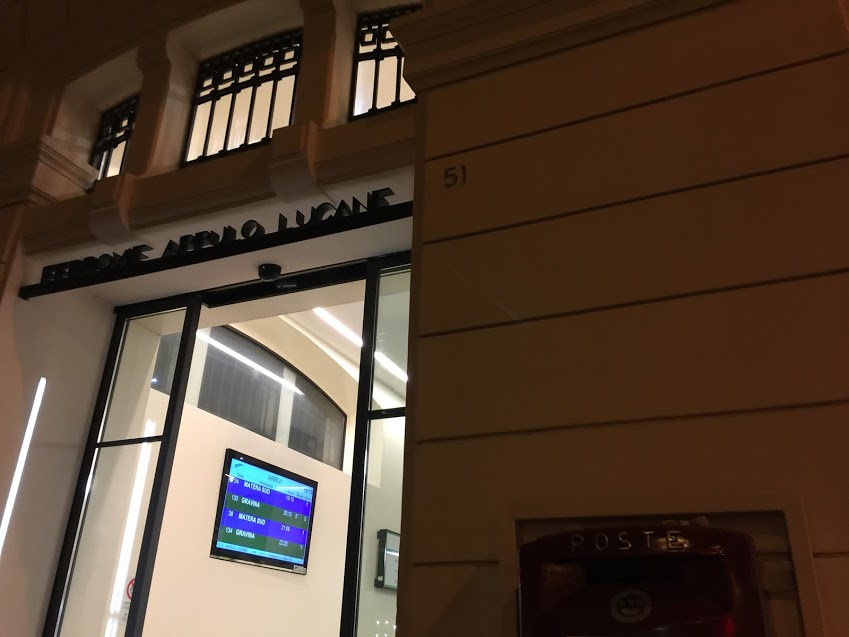 Appulo Lucane  or FAL trains service towns in the Puglia and Basilicata regions.  It’s a privately held railroad that runs on its own tracks and moves very slowly.

Once you have your ticket proceed to the end of the hallway and up the stairs to the platforms, there are 2 tracks. 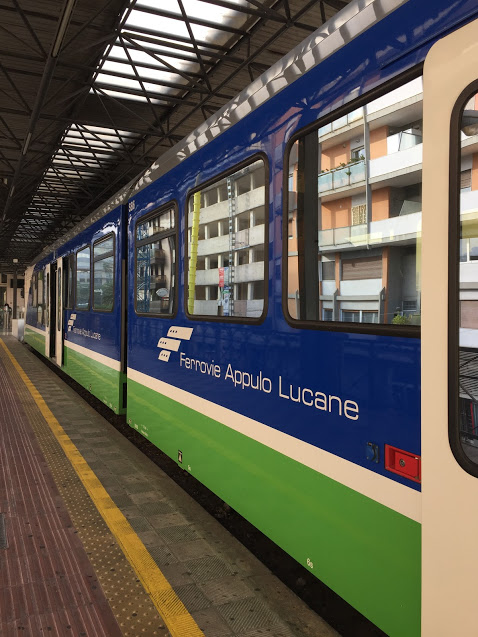 Some trains to Matera are direct, others require a transfer in Altamura.  Don’t worry the Altamura station has only 2 tracks and each train car displays its destination.  Trains to Matera run about every hour.  Ask at the station if you must change trains in Altamura.

For directions from the Matera station to the Sassi click here! 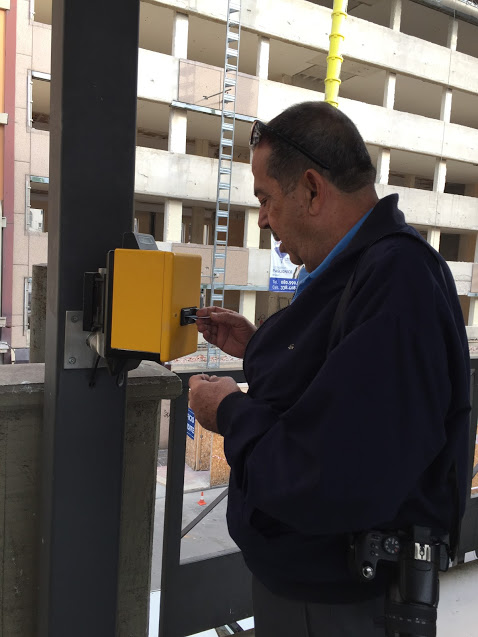 Now whether you’re headed to Rome, Alberobello, Matera, or anywhere on any of these trains the most important thing to remember is to validate your ticket before getting on the train.

There are validating machines located on every platform.  Failing to validate your ticket can result in a hefty fine; and being a tourist is no an excuse, most conductors don’t care and will charge you the fine.

This is a privately owned rail company based in Bari.  It manages the Ferrovie del Nord Barese which is composed of the Bari-Barletta line and the Bari metropolitan railway network.  This train connects Bari to its airport and suburbs.