The 10 Best Things To Do In Istanbul

Why do I love, love, love Instanbul?  Let me count the ways!  I love the people, the culture, the art, the sites,the architecture, the shopping (oh the shopping!), and most of all the food!

Istanbul though not the capital of Turkey, (the capital is Ankara), is a major Turkish city.  It straddles 2 continents, Asia and Europe through the Bosphorus Strait.  The city is the melting pot where East meets West.

This city has a checkered past and played a strategic role in the area’s history having been settled and conquered by the Greeks, Romans, and Ottomans.   The area was probably inhabited as early as 3000 BCE.  In the 7th. Century BCE it was colonized by King Byzas who after consulting the Oracle of Delphi choose the site to establish the city he called Byzantium.  By the early 100’s BCE it became part of the Roman Empire and 306 CE the Emperor Constantine made it the capital of the Eastern Roman Empire or the Byzantium Empire, and renamed it Constantinople.  Finally in 1453 it was conquered by the Ottoman Turks who made it their third and final capital and renamed the city Istanbul.

Istanbul has certainly been through centuries of turmoil and upheaval.  Every conquering power left it’s mark making this one of the most beautiful cities in the world.  It’s certainly one of my favorites.

The city is basically divided by the Bosphorus Straight, one side is Europe and across the bridge is the Asian side. The Old City where you’ll find many of the famed historic sites is on the European side.  The Asian side is mainly filled with quiet high end residential homes, but has some historic palaces and bazaars.  It is where you’ll find modern malls complete with high end shops.  You’ll also find the yogurt of the gods there, that decadent creamy ambrosia that Tarihi Kanlica Yogurdu has been churning out since 1893, if you have time it’s worth the trip.

We try to visit Istanbul every year, though with recent upheavals including the failed coup last summer we’ve sadly avoided the city the last couple of years. One of my friends visited the city last year with her family.  She told me she felt the risks of visiting Istanbul were no more than the risks of visiting Paris, a city that has been recently plagued with violence as well.  As she calmly pointed out, if we avoid traveling to cities we love out of fear, then “they’ve won”.  So this summer my husband and I are heading back to this beautiful city, but this time without the kids and grandkids.

I will not say that everyone should catch the next flight to Istanbul, that’s a decision each person must make for themselves.  I will however say that when things settle down, and I hope they will soon, Istanbul is definitely worth the trip!

So if you’re planning a trip to Istanbul whether this year or whenever here are my 10 favorite things to do in this beautiful city. 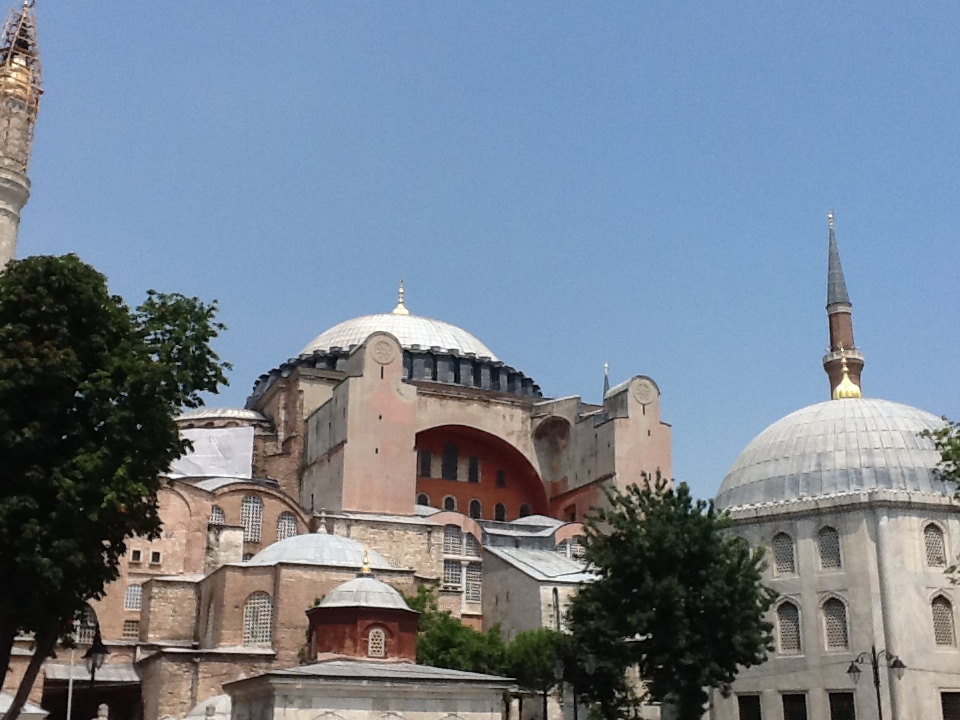 The Hagia Sophia is a must see.

It is one of the historical architectural wonders that still stands today.  The vast structure we see to day is actually it’s third construction of a building on the same site.

It opened in 537 CE during the Eastern Roman Empire Era and was the Empire Church where emperors were crowned.  It was renovated as a mosque during the Ottoman Turk rule, and today it is a museum.

In the Hagia Sophia you can explore the vast space, wonder at the high ceilings and pillars, and marvel at the beautiful mosaics. 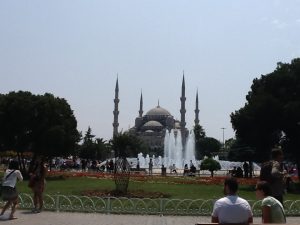 The  Sultanahmet Camii, popularly called the Blue Mosque is another beautiful  must see structure in Istanbul.

It’s called the Blue Mosque because of the beautiful blue tile adorn the walls and ceilings.  This is an active mosque that visitors are allowed to visit, but it is closed to visitors during prayer time 5 times each day.

If you plan to visit this or any mosque dress modestly.  Both men and women must be covered from the knees up and arms and shoulders must also be covered.  Women must cover their heads before entering and everyone must remove their footwear.  If you’re not properly attired you will be given disposable sheets that can be draped over shoulders, wrapped around the waist, and used as a head cover.  You’ll also receive a paper bag for your footwear.

Since you will be in the area after your visit to the Blue Mosque and Hagia Sophia cross the street and spend a few minutes at the Hippodrome.

During the Byzantine Empire the Hippodrome was the sporting and social hub of the city.  Today a few of the structures still stand, mostly columns and oblisks. 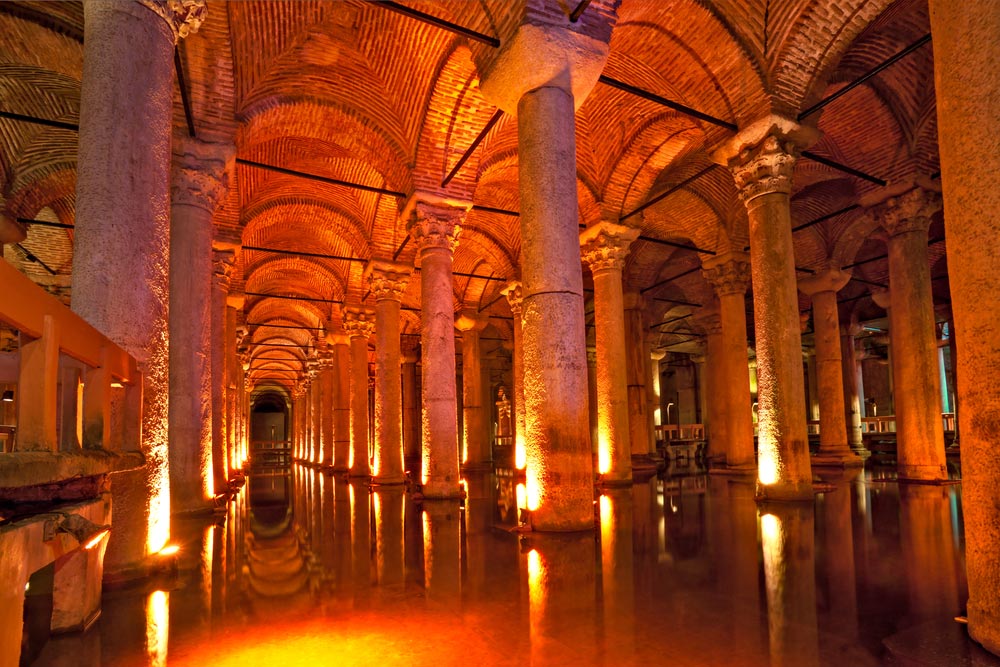 A must see for Dan Brown fans is the Basilica Cistern.

This underground structure accessible only by descending 52 steps is a huge reservoir that holds about 100,000 tons of water.

It was here that the final scene of Dan Brown’s novel, Inferno, played out.  The movie starring Tom Hanks was filmed here as well.

The cistern is home to 336 columns in the Corinthian or Doric styles.  Look out for the Medusa head columns they’re pretty cool! 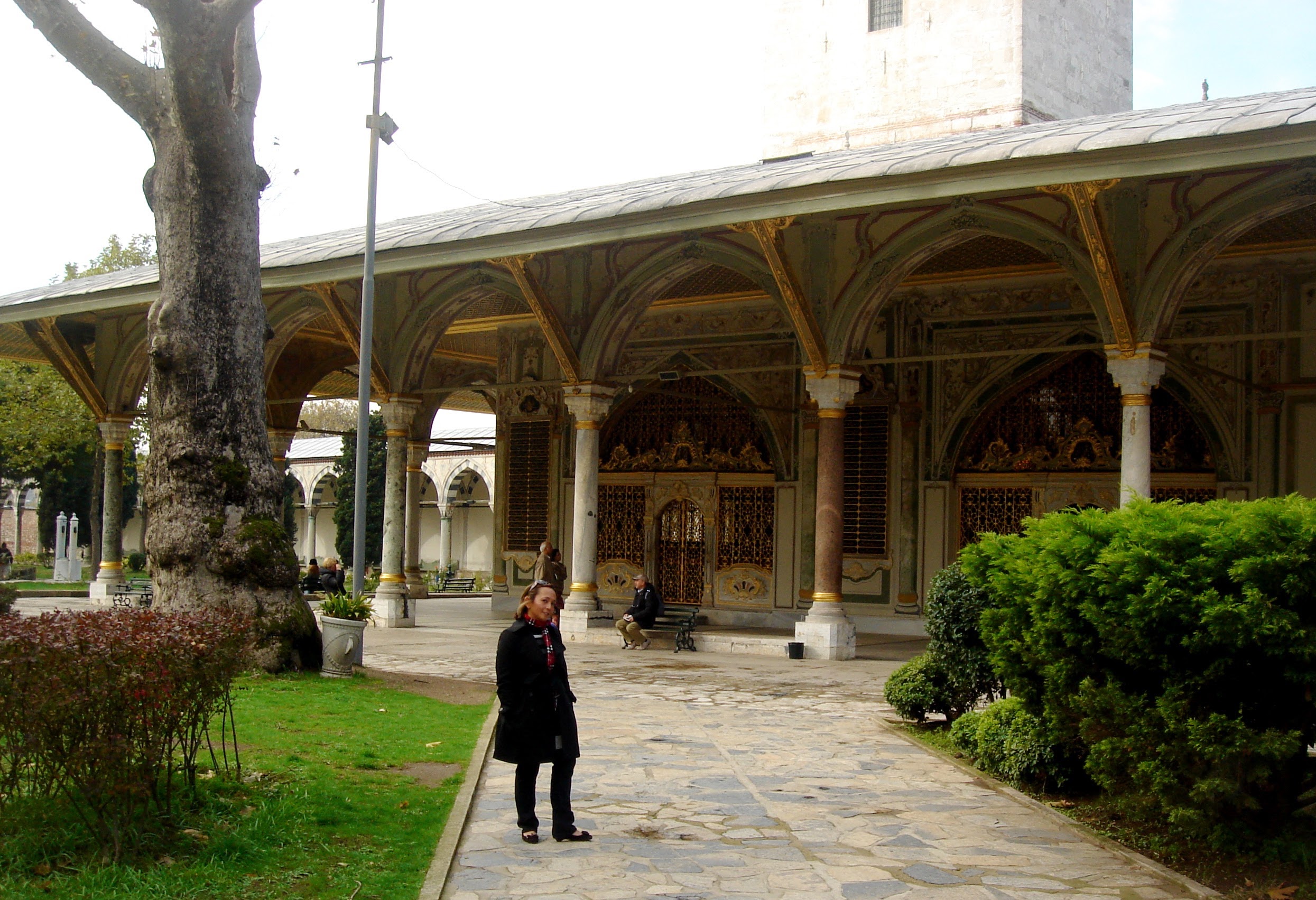 Located on the Istanbul Peninsula between Sea of Marmara, Bosphorus and the Golden Horn is the Topkapi Palace.

My favorite collection is the Imperial Treasury where gem studded jewelry and other objects are displayed. It was hard to take my attention from the Spoonmaker’s Diamond, the 86 carat pear shaped diamond displayed in the collection.  It is considered to be the 4th. largest diamond in the world.

Also located within the palace grounds is the Harem, the Sultan’s family living quarters.  You can visit the Harem by buying a separate ticket.  Here you will see intricate carvings, beautiful tile work, and lavish furniture.

Don’t leave the palace without strolling thru the grounds and taking in the panoramic views of the Bosphorus.  It’s breathtaking! 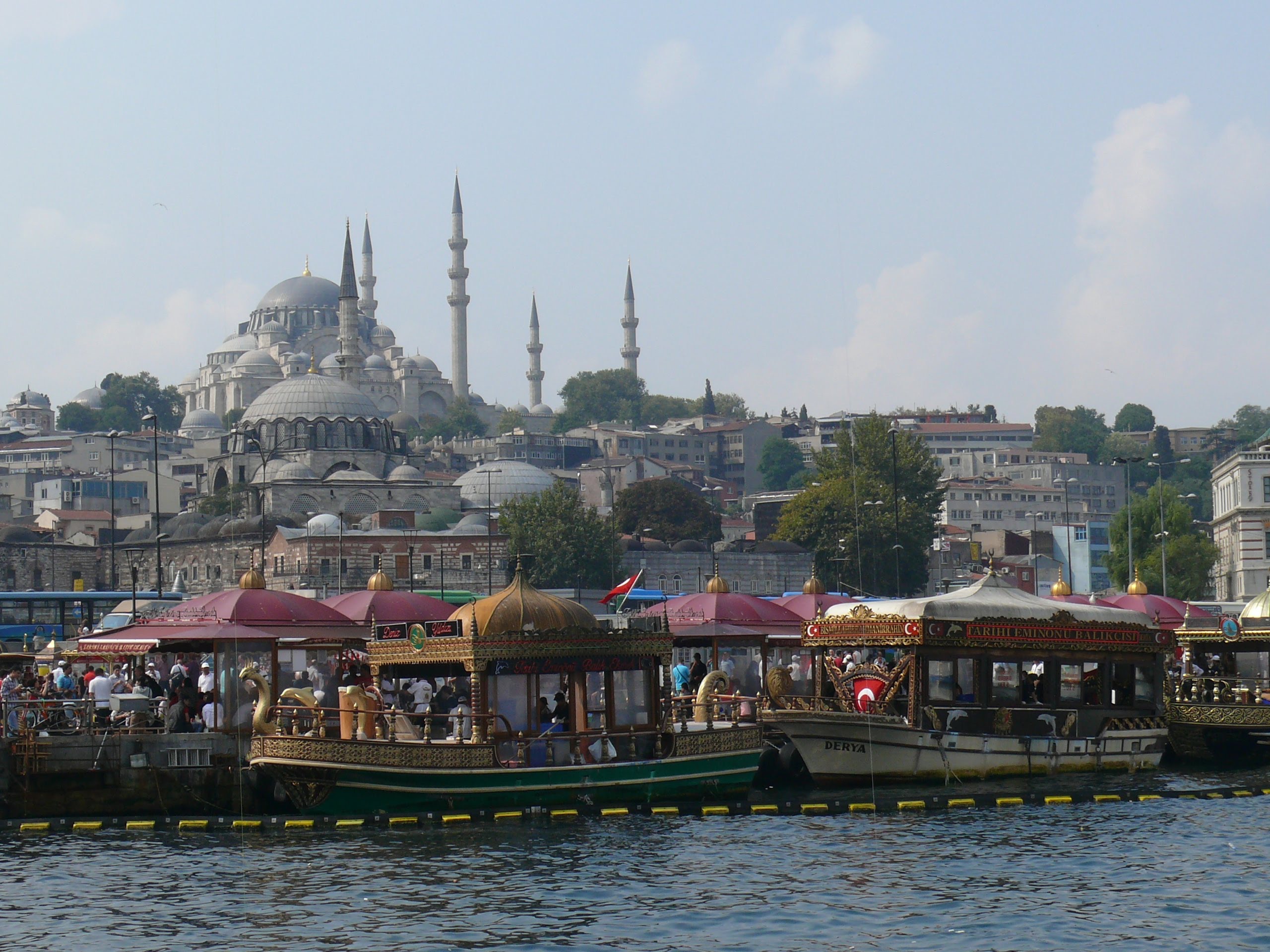 A Bosphorus Cruise is one of my favorite activities in Istanbul.

A cruise down this 20 mile strait that connects the Sea of Marmara to the Black Sea gives you a whole different perspective of the city.  You’ll sail past the city’s iconic buildings and see some of the beautiful villas and hotels on both the European and Asian Sides.

There are many different cruises offered that will fit everyone’s budget.  The least expensive way would be hop on a public ferry.  There are also hop on hop off boats that service the route as well as private charters.  We love the private yacht charters that give you a personal cruise down the strait.  It’s a great way to sunbathe while you’re enjoying the sites. 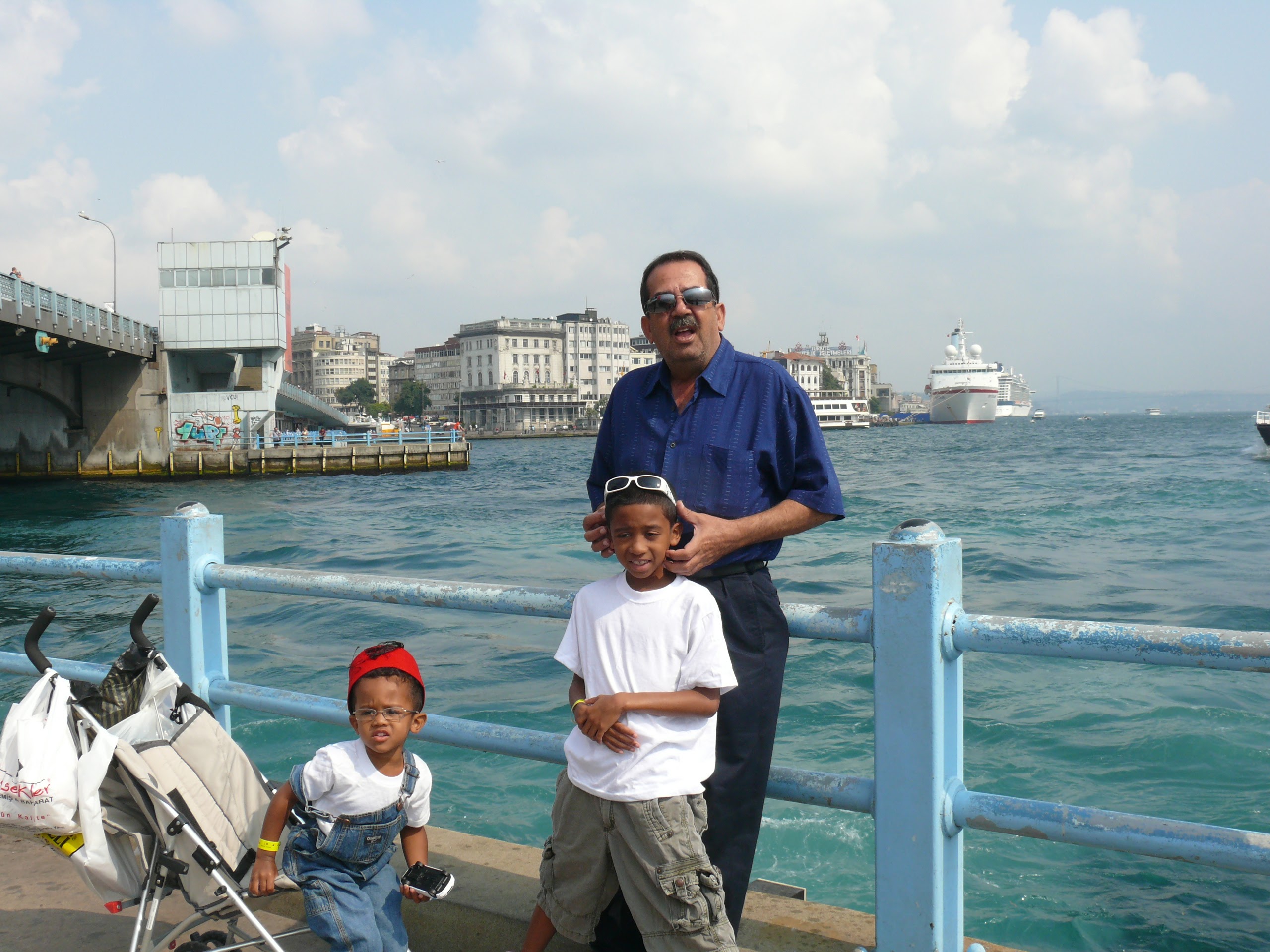 Walk around the Eminönü Waterfront.

This is festive area is where all the ferries and tour boats dock.  It’s filled with cafeterias and food carts.  It’s a great place to grab some Lokma, sweet fried dough.  It’s one of my favorite treats. 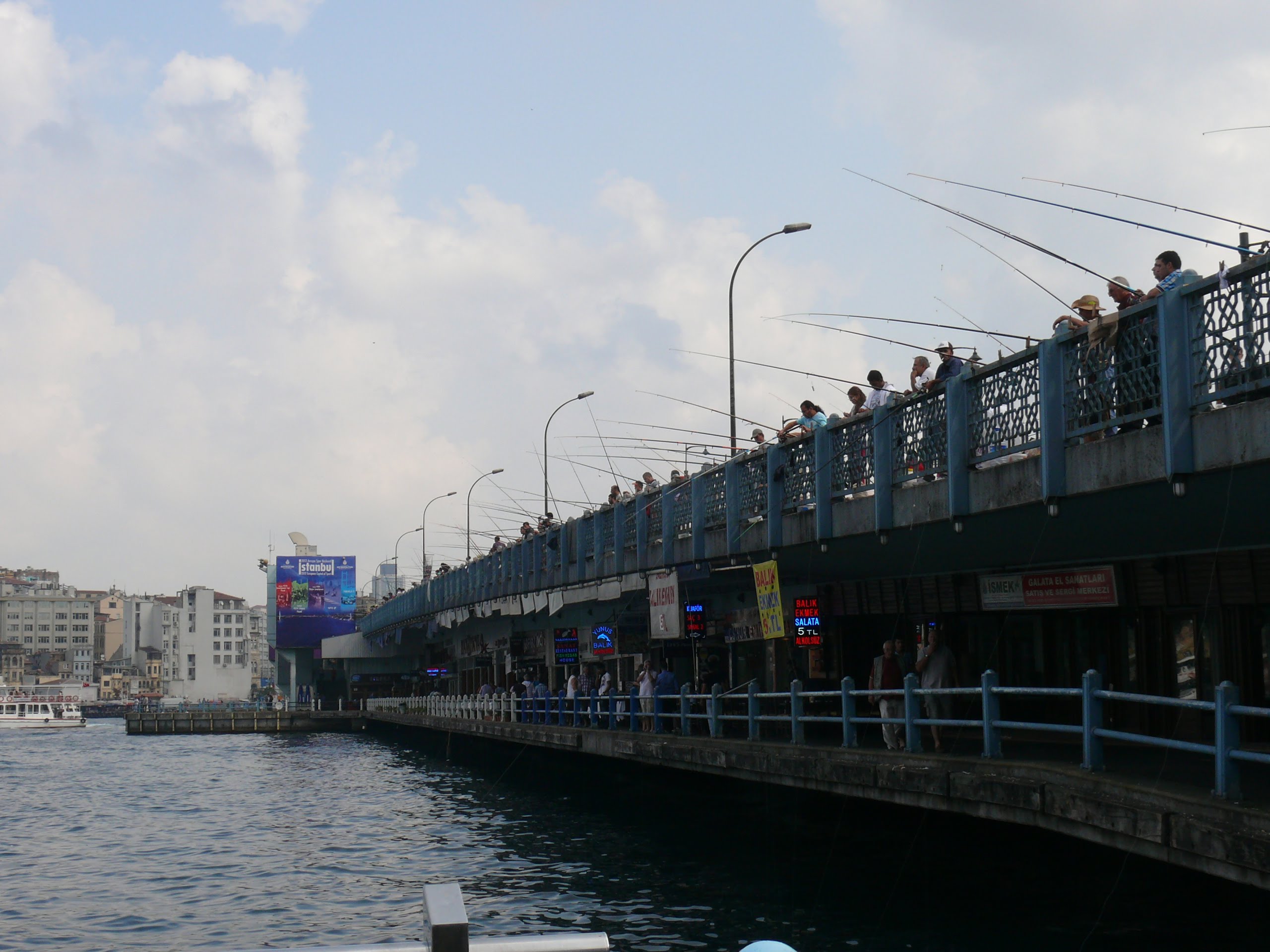 Enjoy a seafood meal under the Galata Bridge.

The walkway under the bridge is lined with seafood and Turkish restaurants.  They all offer outstanding views of the Bosphorus. 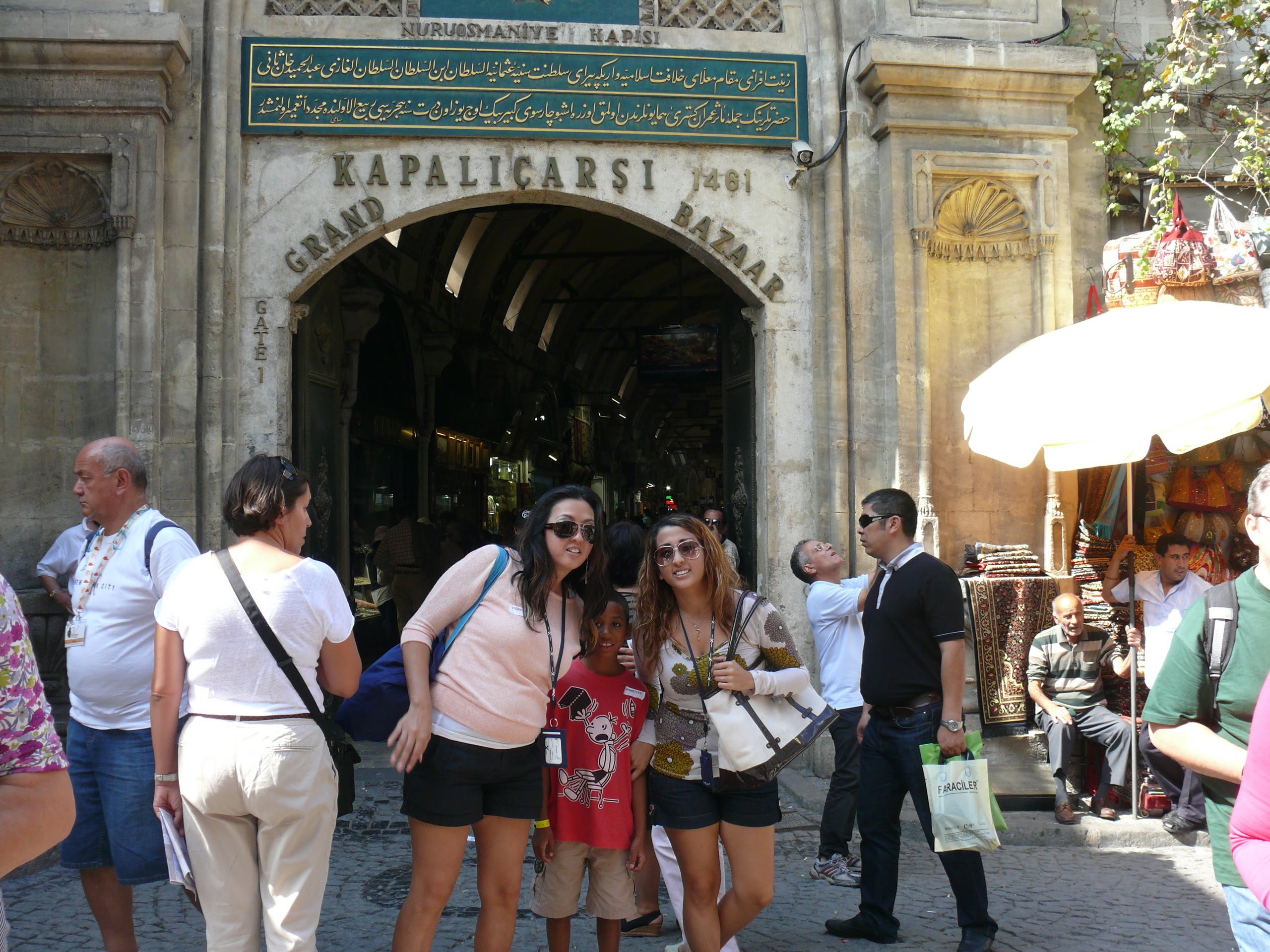 Shop til you drop at the Grand Bazaar!

These days the bazaar is a tourist attraction filled with Turkish carpets, leather goods, fabrics, scarves, handicrafts, jewelry stores (my favorite is Birlik, we’ve purchased gold earrings, bracelets, and necklaces from them for years).

If you’re looking for inexpensive clothing, shoes, and household goods, shop instead in the streets leading from the Grand Bazaar to the Spice Bazaar.  You’re sure to find bargains. 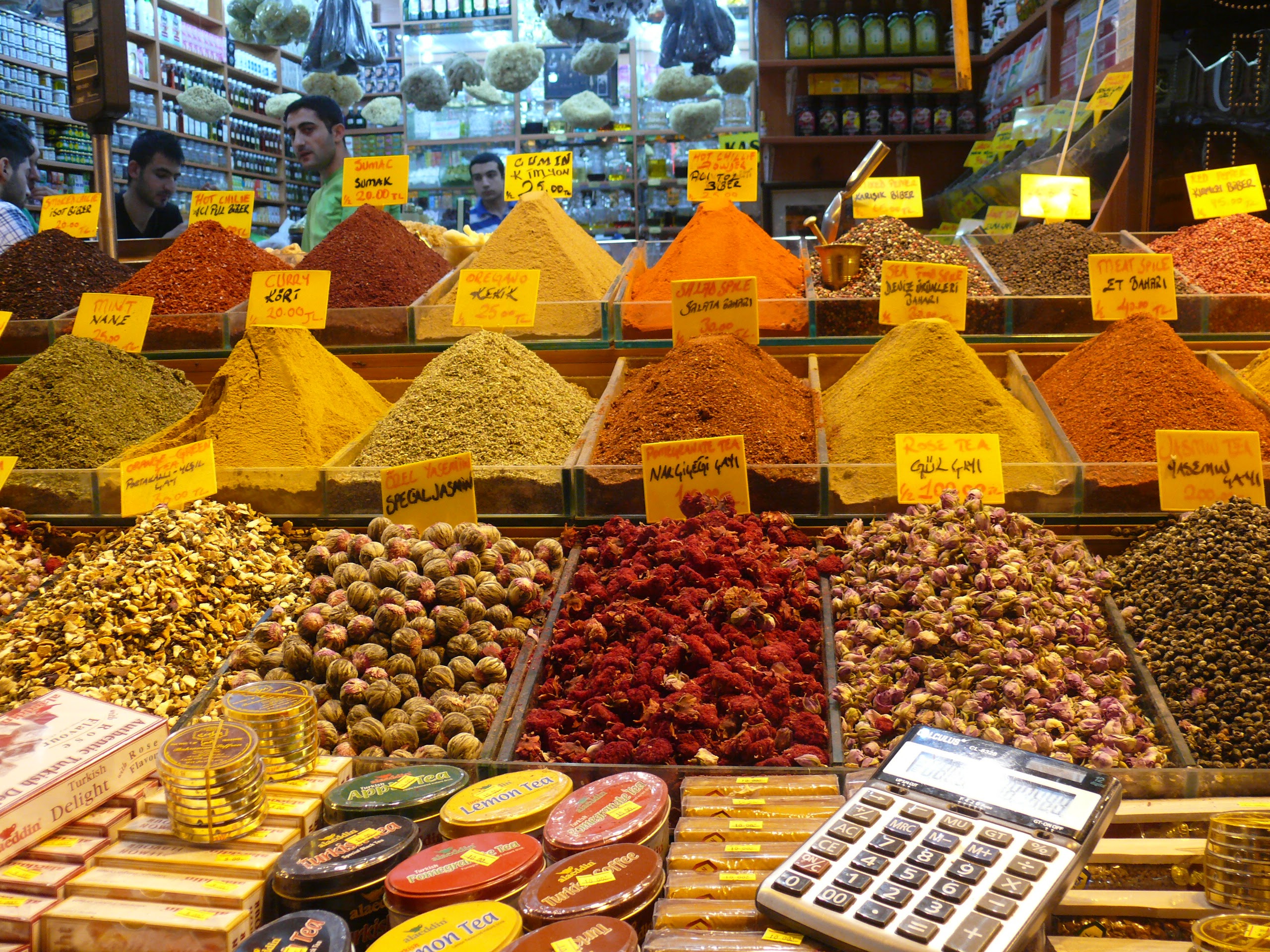 This covered indoor bazaar is second only to the Grand Bazaar.  It’s a feast for the senses!

The sights and smells are amazing and the colors gorgeous. You can find almost any spice you want there as well as olive oil, olives, nuts, and candies.  I usually pick up a jar of Persian Saffron as well as other spices including cumin when I’m there. 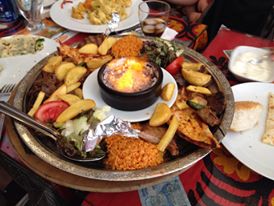 Istanbul is not lacking in restaurants, it’s hard to find a favorite.  We generally eat when we get hungry.  I’ve had a delicious homestyle vegetable stew from one of the little vendors in the Grand Bazaar and enjoyed elaborate meals at one of the many restaurants.

Over all I’d have to say my two favorites are Capadocia Restaurant on Hocapaşa Mahallesi, Hüdavendigar Caddesi, No 12, Fatih, İstanbul.  They serve traditional Turkish food in a cozy atmosphere filled with plush pillows.  The food is delicious and the staff very friendly!

My other favorite, also a local favorite is Hamdi Restaurant on Eminönü.  This restaurant is on the second floor and offers great food and panoramic views of the Bosphorus.  Reserve ahead, they get very busy.

For snacks grab or try to grab an ice cream cone from one of the street vendors.

The buying is almost as fun as the eating!  The vendor puts on an elaborate show of scooping ice cream taunting the buyer to try and grab the cone from his stick.  My grandsons always enjoy the experience. 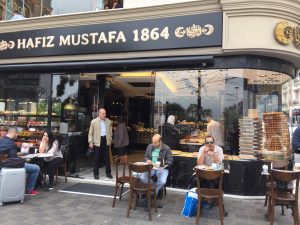 Leave room for dessert!  Puddings are very popular in Turkey with pudding shops dedicated to the sale of the creamy sweet stuff.  Other tempting treats include different varieties of Baklava (my favorite are the ones is Dürüm, a pastry wrapped in green phyllo dough made entirely of pistachios) and Kunafe a sweet and savory cheese pastry usually enjoyed warm.

There are many pudding shops and baklavarias around Istanbul.  Our all time favorite is Hafiz Mustafa.  A trip to Istanbul isn’t complete without a visit or two to Hafiz Mustafa for some Kunafe!