Rhodes – What to do in and around Old Town 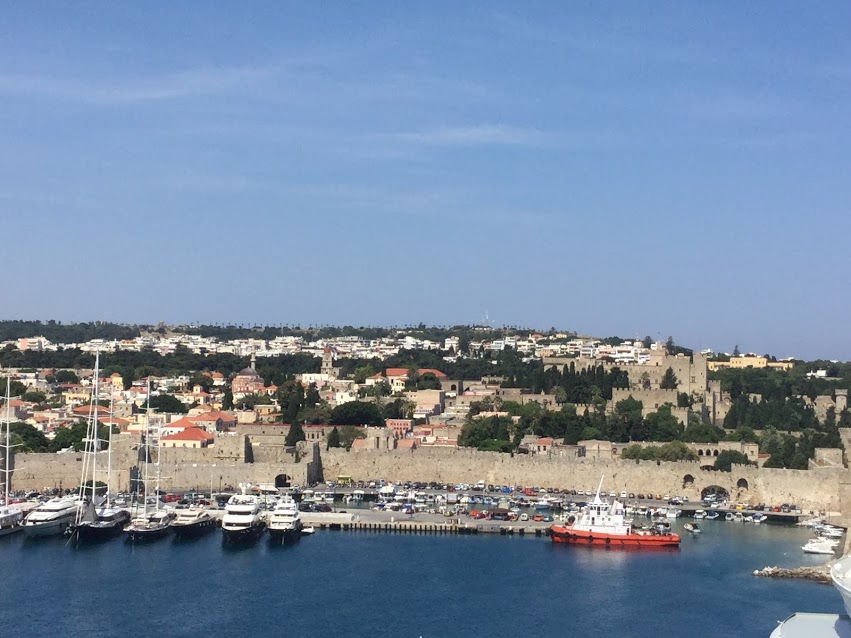 Located in the eastern Aegean Sea just 11 miles southwest of Turkey is Rohdes.  It is the largest of Greece’s Dodecanes islands.

Rhodes is one of the sunniest destinations in Europe.  It boasts 300 days of sunshine every year.  Making it a popular destination for sun lovers and a popular port for cruise ships plying the the Greek Islands route.

Rhodes has been inhabited since the Stone Age and has a long and illustrious history.  It’s most significant period was around 407 B.C. when three cities on the island (Kimiros, Lindos, and Ialyssos) merged together to become the new city of Rhodes.

It was during this time period that the huge bronze statue of the Greed god Helios was erected to stand guard over the waters of the ancient harbor.  Created by the great Greek sculptor Hares and called the Colossus of Rhodes this statue was one of the Seven Wonders of the Ancient World.  Unfortunately according to legend the 110 foot statue was demolished by an earthquake in 226 B.C. 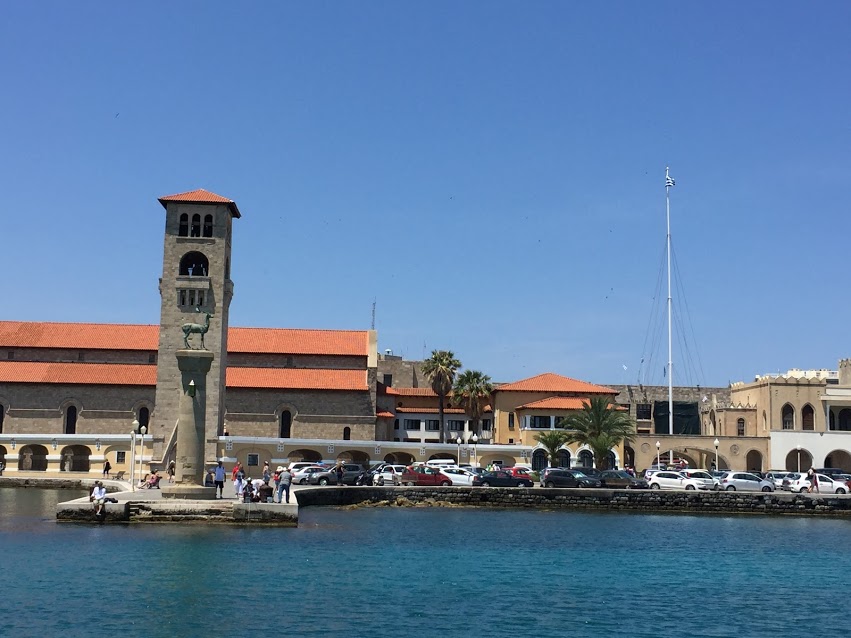 Today the harbor known as Mandraki Harbor is home to lavish yachts and local fishing boats.  Its shores are lined with trendy cafes.  Even remnants of the great statue are gone, standing in the harbor are a male and female deer, the modern symbols of Rhodes.

No matter what your interests are most folks who visit the island end up making at least one trip to the Old Town.  That walled in city founded by the Knights of St. John in 1309 is a UNESCO World Heritage Site and is the oldest inhabited medieval town in Europe.  Old Town Rhodes is a living museum with immeasurable charm.  Spend a day there, you won’t be disappointed!

Here are some things you can do in Old Town Rhodes, trust me it’s well worth the trip! 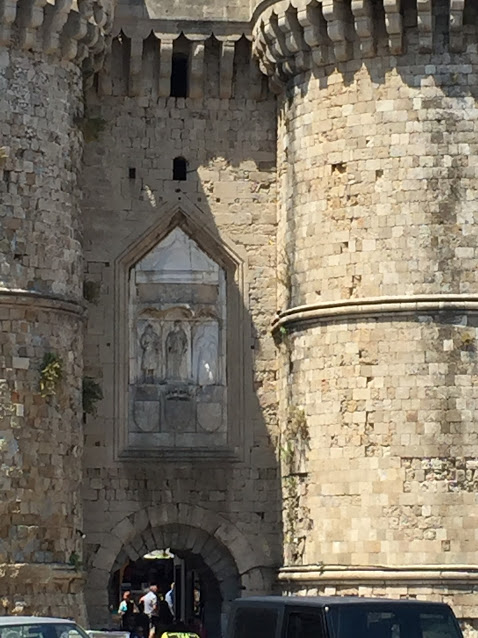 To get the full effect of this walled in town walk in thru one of the open gates.  St.  Catherine’s, Marine, and Liberty gates are entered on the ocean side while Amboise gate is on the side and back of the city.  These are just 3 gates into the city.

There are actually 11 gates to the town, some ancient and some modern.  Not all gates are still open. The ancient St. George Gate was closed in 1480 and turned into a bastion by the Grand Master.

I like the modern Liberty Gate it has some “windows” that overlook the sea and offers some cool photo ops.  This gate was built by the Italians in 1924 and was built to reflect the medieval gates. 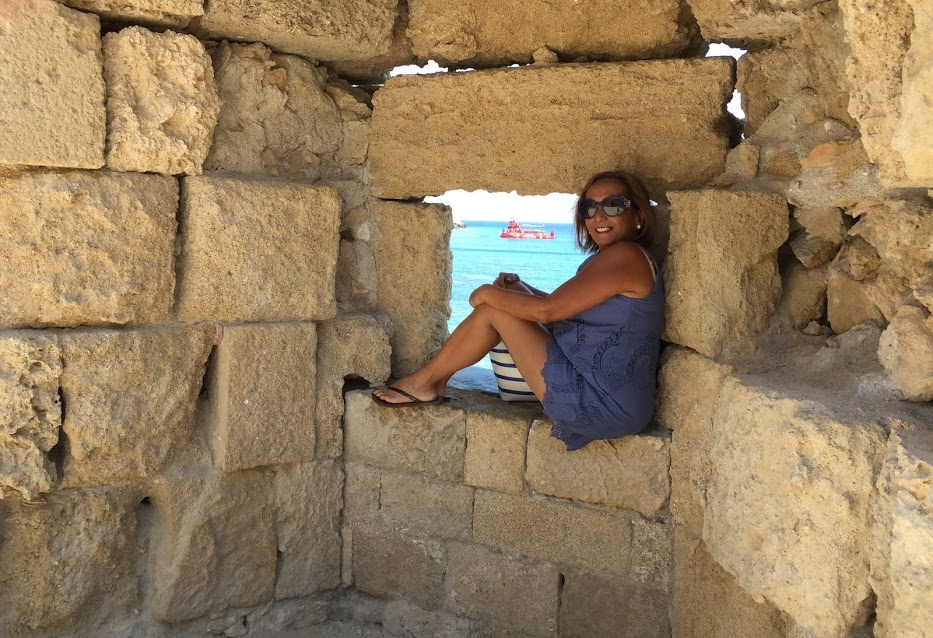 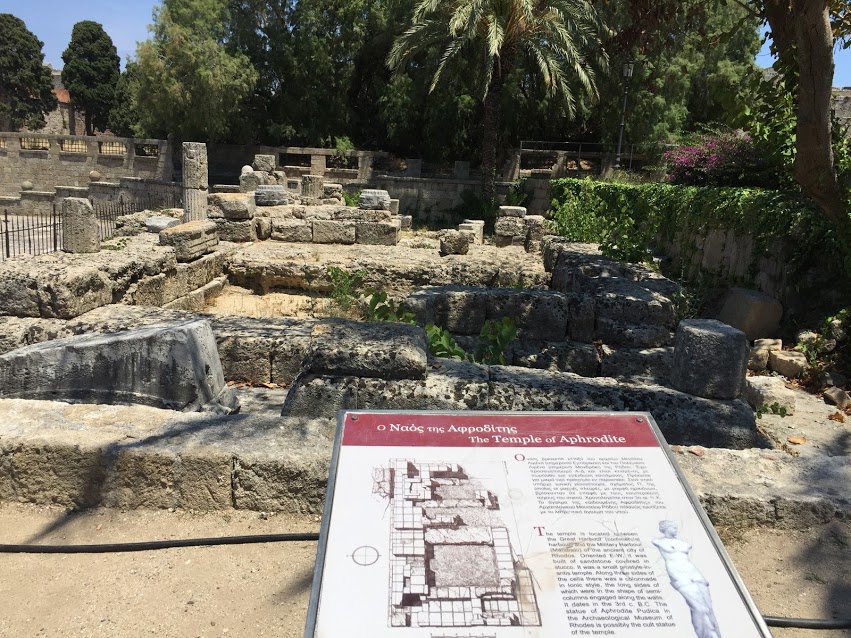 The Liberty Gate is not far from the Archaeological Museum and offers a glimpse of the ruins of Aphrodite’s Temple.

You’ll find shops, restaurants, and cafes along the street that leads from the gate.  From this gate, and from any of the gates you can easily make your way to the Palace of the Grand Masters.

Museum and History buffs will want to visit the Archaeological Museum.  The museum houses exhibits of art and sculpture from different periods of Rhode’s history as well as artifacts from the time of the Knights.  But it’s main attraction in my opinion is the building itself. 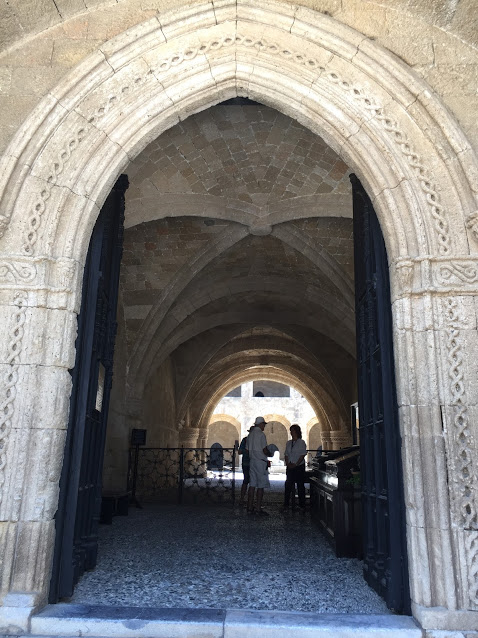 The Archaeological Museum is housed in the impressive building that once served as the hospital of the Knights of St. John.

Visitors enter via the main entrance on the east side of the complex and find themselves in a large courtyard surrounded by vaulted porticoes.

There’s a monumental grand staircase on one side of the courtyard that leads up to the timber roofed balcony.

Exhibition rooms are located in the wings of the building and house some very fine sculptures and artifacts from Rhodes and nearby islands.

It’s definitely worth a short visit! 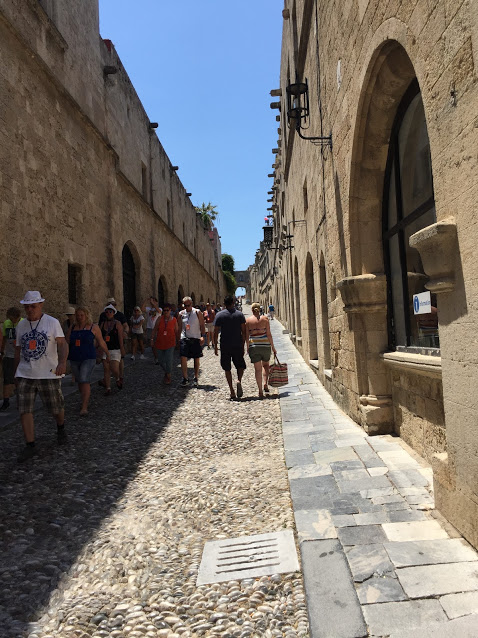 From the Museum you can make your way to the Street of the Knights.

This medieval street features the lodgings of the Knights of St. John.  The buildings represent the 7 countries where the knights came from.  You’ll see a coat of arms or plaques next to the doors telling you which country it represented.

The Street of the Knights lead up to the Palace of the Grand Masters. [spacer height=”-20px”] 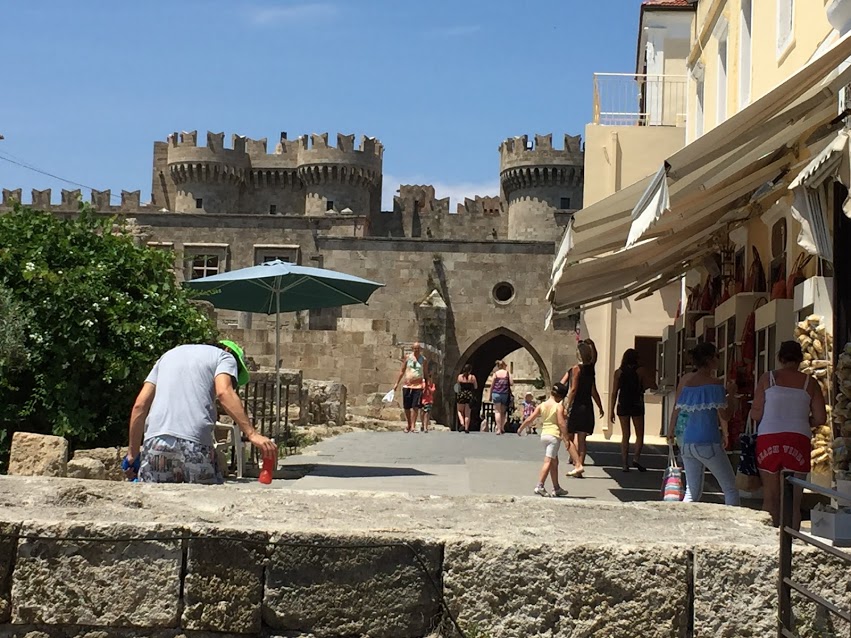 Located at the end of the Street of the Knights at the highest point in the Old Town of Rhodes is the Palace of the Grand Masters.

Built by the Knights of St. John in the 14th. Century it was the home of the Grand Master and served as the fortress that defended the town and the harbor.

It is one of the few examples of Gothic architecture in Greece.  Today it is a museum with exhibits that display the history of Rhodes.  It also has a fine collection of 16th and 17th-century jewels, handicrafts, weapons, books, and paintings, and  mosaics of late Hellenistic, Roman, and early Christian times, excavated on the island of Kos.

It will take about 3 hours to see every exhibition, but an hour or so to just see the highlights, like the wonderful mosaics. 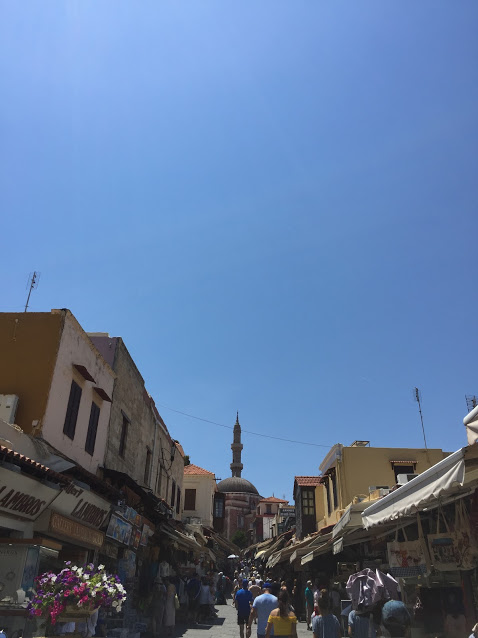 Those are really the 3 main sights within the Old Town of Rhodes, but if you don’t want to see inside each of them you really don’t need to.

You can spend hours just wandering around the winding alleys and streets around the town.  That’s really what I love to do. 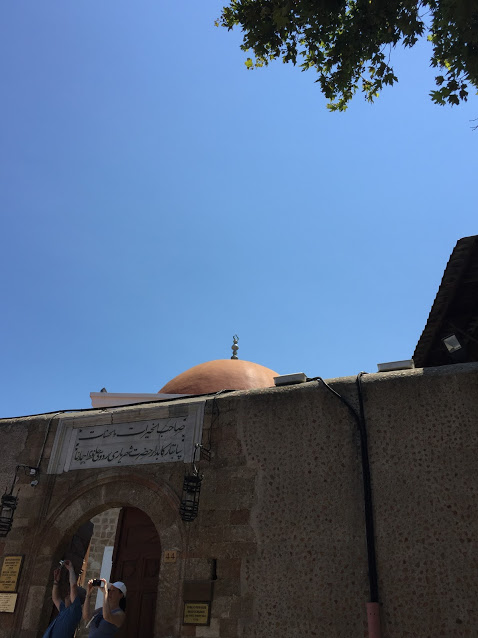 Each street is different.  The main streets leading to the main attractions are lined with shops, restaurants, and cafes.  You’ll also find the old Synagogue and Mosques along those streets.

There’s also a Jewish Library on one of the main roads not far from the Synagogue.

Open times for these sights are posted by theirs gates or doors. 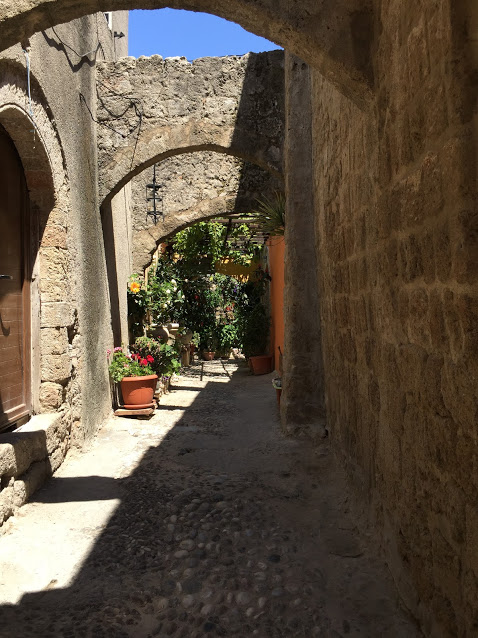 But don’t stay on the main streets, they’re too busy and too commercialized in my opinion.

To get the real feel of the town don’t be afraid to wander thru the side streets.

Did I mention that Old Town Rhodes is a living museum?  It has some 6,000 people who live and work in the building used by the knights over 500 years ago![spacer height=”-20px”] 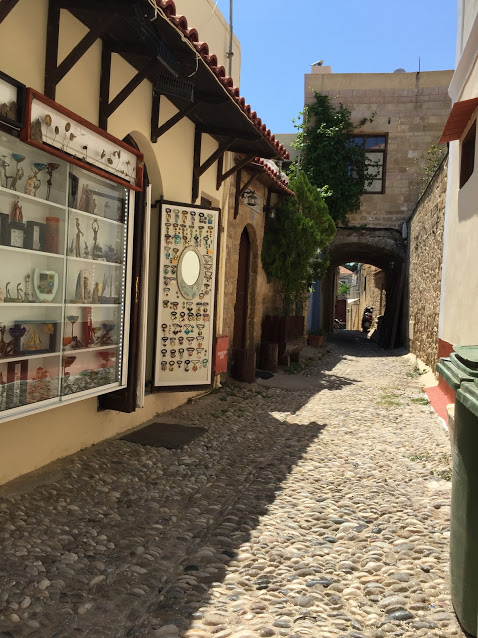 Wandering around the side streets is a great way to meet and interact with the local residents and browse some of the unique shops. 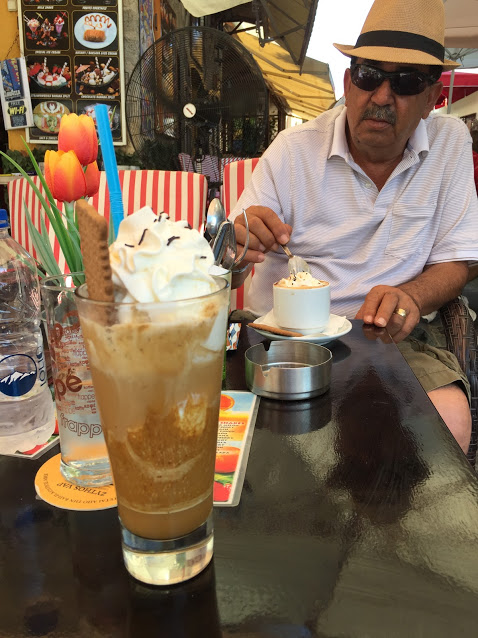 You might consider stopping at one of the local cafés for a quick snack or refreshing drink.  Believe me you’re going to need a beverage after exploring the Old Town.  It gets pretty warm on Rhodes!  [spacer height=”-20px”] 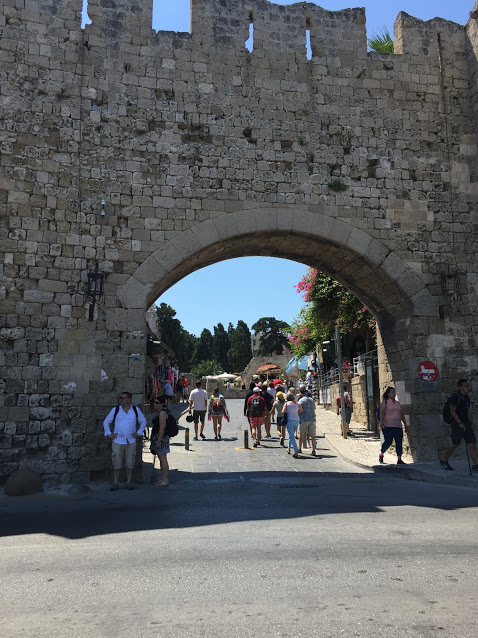 When you’ve had your fill of the Old Town head out the Marine Gate and take a stroll along the harbor.

There’s a small pebble beach in the Commercial Harbor just across the street from the Marine gate.  if you walk a bit to your right towards St. Cathrine’s Gate you’ll see this pretty dolphin sculpture built on the rock.  It makes for a nice short photo op.

From the dolphin statue head back towards the Marine Gate and make your way Mandraki Harbor where the once spectacular Colossus of Rhodes stood guard during ancient times. 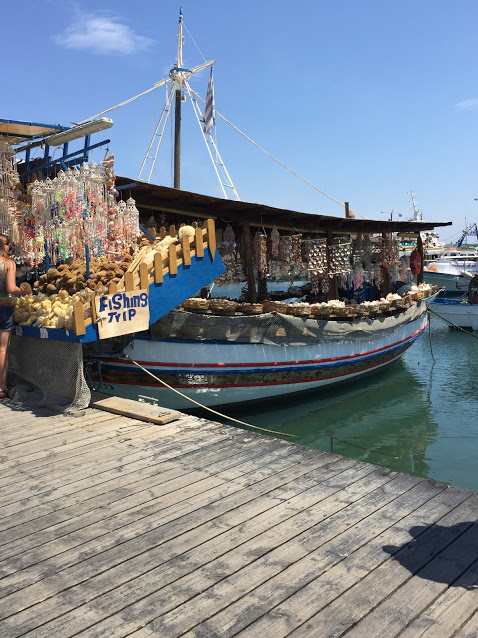 On the way to Mandraki Harbor you’ll pass by some enterprising shop owners who’ve turned their fishing boats into gift shops.  We thought they were pretty cool and were amazed at the amount of stuff they could fit on the boats! 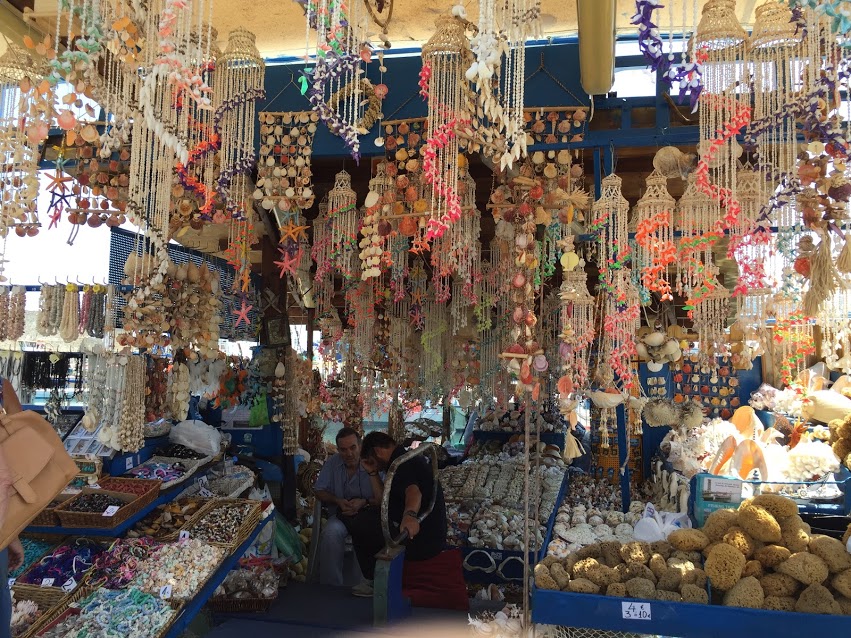 You’ll also pass kiosks that sell boat tours to neighboring islands and even Turkey.  You can also find fishing charters along the harbor.  It might be something you can do another day! 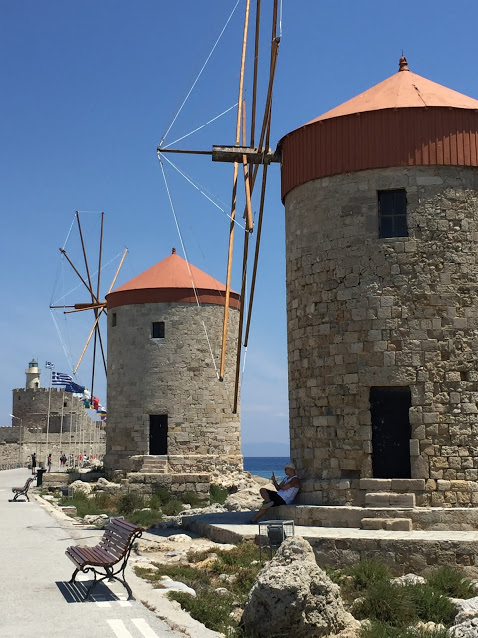 Continue on along the harbor and walk along the breakwater.  Here you’ll pass 3 windmills.

The windmills are what remains of the 14 medieval windmills that used to grind grain for the town.

There are benches along the breakwater where you can have a quick rest while enjoying the luxury yachts docked in the harbor. 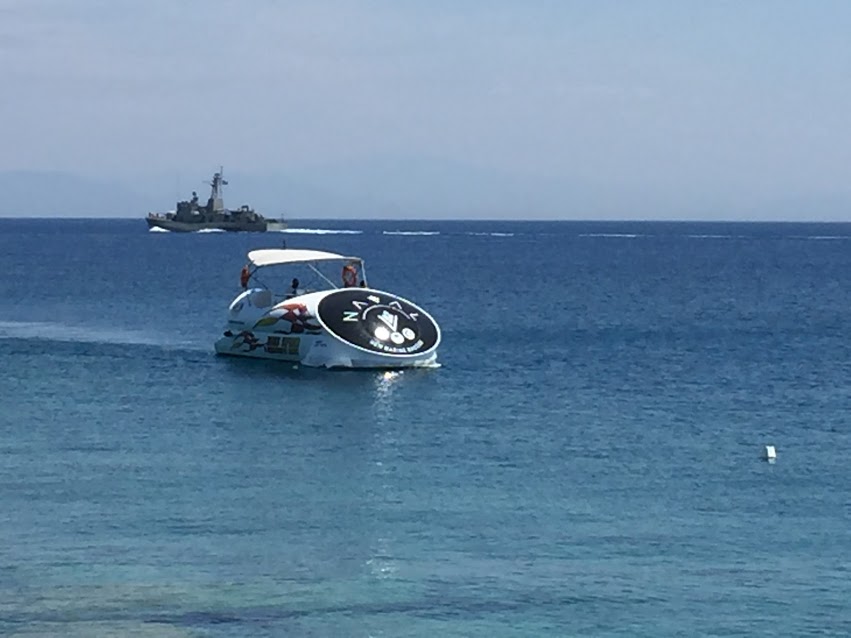 Or you can grab a seat on the steps around the windmills and watch tourist boats enter the harbor.  There are some pretty unque looking boats that sail the seas around Rhodes! 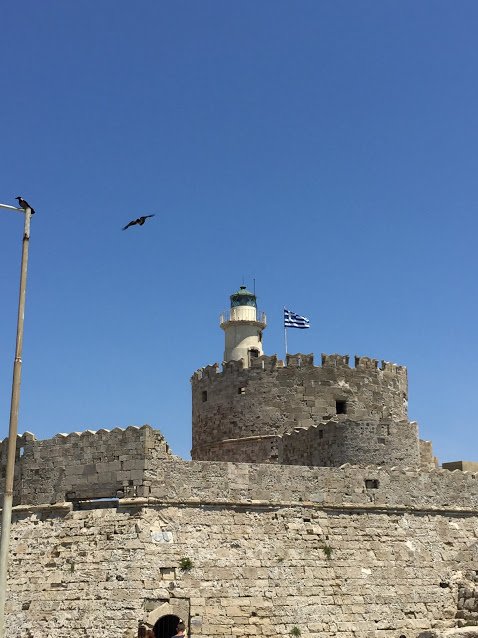 At the end of the breakwater you’ll come across St. Nicholas Fort and Tower.

Currently you can’t go inside the fort but you can have a quick walk around and a peek thru the gate! 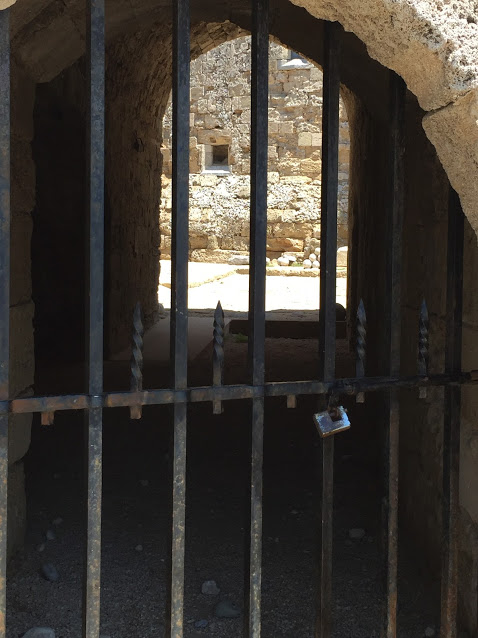 Just past the fort are the statues of the male and female deer, the current symbols of the island.  The statues stand on columns on either side of the harbor. 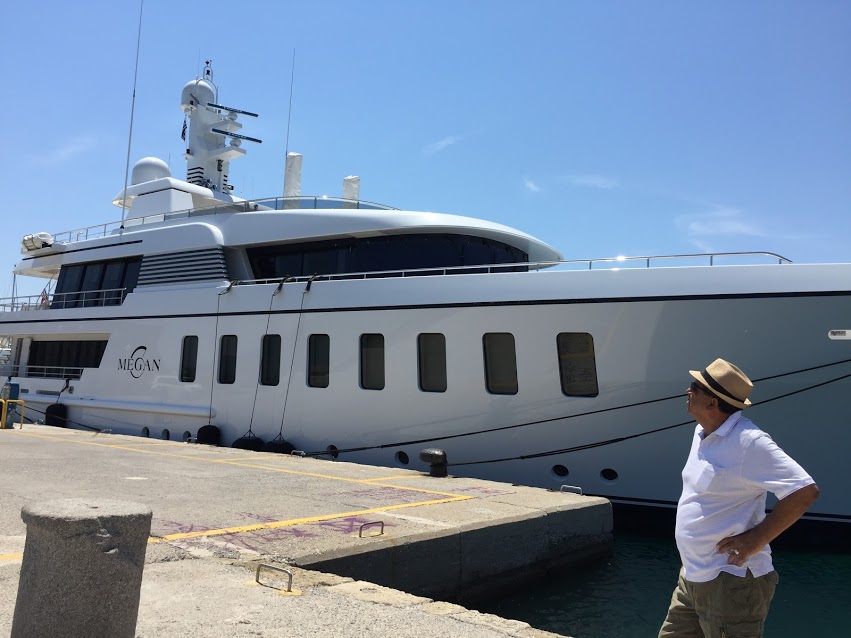 When you’re ready to walk back consider walking along the harbor instead of the breakwater.  You can admire the yachts and fishing boats docked at the harbor.

About halfway back you’ll find a floating restaurant, it’s usually open for dinner.  You might consider a meal or a drink if it’s open.  We had wanted to but it was still closed when we passed by.[spacer height=”-20px”] 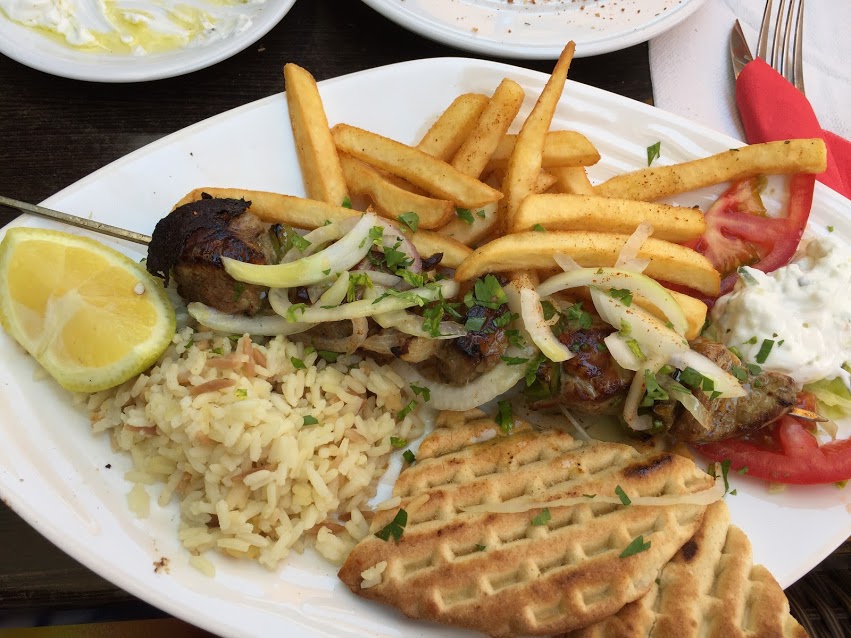 If you’re feeling hungry and didn’t get to try one of the island’s specialties in the Old Town head over to the New Market across from Liberty Gate.  You’ll find lots of outdoor restaurants serving Greek specialties like Tzatziki, Pastitsio, Moussaka, and Souvlaki.

My favorite was this beef souvlaki served with rice, tzatziki, and fries![spacer height=”-20px”]