New York City is my town!  I grew up in this wonderful city.

I attended a private school in the Upper East Side just across the street from the New York Metropolitan Museum of Art and Central Park. You might say the Park and Museum were my playgrounds; my friends and I frequented the Museum after school to hang out; and ran around Central Park during recess when the Nuns decided we needed fresh air.

My family lived in Midtown Manhattan, not far from the United Nations, another one of my childhood haunts.  My Mom and other relatives worked for the UN so we frequently visited with them at work.

Moving to Hawaii my freshman year of High School was a big change; it took a while before I stopped missing the Big Apple and all my favorite places.  So it’s no wonder that I frequently return to the city with my kids and grandkids.

New York City is everyone’s city.  There’s so much to see and do.  Adults love the theater, museums, shops, restaurants, and night life; but there are many sites and activities for families to enjoy too.  Here are our 5 favorite things to do in NYC!

1.  Catch a ferry to the Statue of Liberty!

You can climb to the top of her pedestal or all the way to her crown. Inside the monument there’s a museum that chronicles the construction of the statue and other displays and plaques.  But the main event is climbing the pedestal and crown.  Both will give you spectacular views of the city as well as the harbor and grounds of Liberty Island.

You’ll find refreshment stands on the island where you can have lunch or a snack.  After climbing the monument you and the kids will be ready for at least a cold drink!  The kids can burn off extra energy on the grounds while the adults enjoy refreshments under the shade of the trees.

There’s also a large gift shop where you can buy Statue of Liberty souvenirs including a 5″ tall replica of the Lady herself.  I know, my husband purchased one!

Stop by Ellis Island on the way back from the Statue of Liberty!

(I know I’m cheating this is actually a two for!  But since you’ll be passing by and it’s included in the ferry ticket, you really should stop in and have a look around!)

Ellis Island was the gateway for 12 million immigrants between 1892-1954.  People arriving to America in those days had to stop at Ellis Island to be processed before they could enter the country.  This included answering 29 questions and obtaining a health clearance.  Immigrants who were visibly ill were sent to the hospital on the island, some stayed for long periods of time before they were deemed healthy enough to enter; others were sent back to their home countries, and more than 3000 immigrants died in the hospital.

Today the island is an immigration museum.  There are computers available for those who want to search for a relative who immigrated to this country and passed thru Ellis Island.

We all thought it was super cool when we found my father-in-law’s name in the data base!  It lists his name, date of entry, origin, and vessel he sailed on. 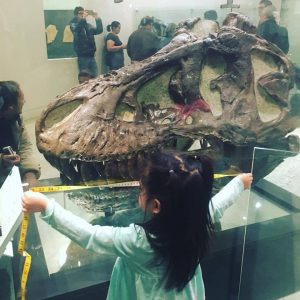 2.  The American Museum of Natural History is a MUST!

Everyone loves dinosaurs!  And the American Museum of Natural History has plenty of them!

My grandsons loved this musuem.  Not only are there dinosaurs but the Fossil Halls has lots of cool stuff, including a huge set of shark jaws!  I think the Fossil Halls are the most popular ones, at least with our kids.  But they liked the Mammals Halls and Earth and Planetary Halls too.

Click here for more information and to buy tickets!

The South Street Seaport is New York City’s iconic waterfront district that is filled with historic buildings, shops, restaurants, and open spaces. It also has great views of the Brooklyn Bridge.

You can dine, shop, catch a movie, or just hang out! And when you’re done you can walk over to Wall Street the heart of the city’s  financial district. Don’t forget to take a photo with the Charging Bull, the bronze statue in Bowling Green Park!

4.  Go to the theater then walk around Times Square!

Catch a Broadway production, we took the kids to Wicked, they loved it!

After the show walk around Times Square, it’s really best after sunset!  The kids loved the lights and shops in Times Square, specially the Toys R Us and M&M stores!

Have dinner at McDonald’s!  You haven’t had a Big Mac or a Happy Meal until you’ve had it in the McDonald’s Times Square.  Outside it’s got flashy lights; inside you’ll dine surrounded by hand-painted murals, a replica of the Statue of Liberty and an 80-square-foot diorama of the New York City skyline.  Even if you’re not a Mickey D fan you don’t want to miss this dining experience.  The kids will love it!

With over 800 acres in this urban park I’m sure you’ll find lots of things to do!

There are lots of play areas and climbing statues in the park.  Our favorites are the Hans Christian Andersen statue and Alice in Wonderland statue!

Don’t forget there’s a zoo in the park as well as a carousel too!  If you’re visiting in the winter you can ice skate at Wollman Rink. Or you can go on a carriage ride, the kids find this fun and exciting.

When you get hungry you can stop by one of the cafes or kiosks scattered throughout the park and grab a pretzel or hot dog.  Or you can dine at one of the restaurants located in the park.  Our favorite is Tavern on the Green!

5.  Check out the critters at the Bronx Zoo!

I know zoos are controversial these days and I’m of two minds when it comes to visiting zoos.  On the one hand I understand the concerns voiced by animal advocacy groups and on the other hand I love zoos and see them as sanctuaries and conservatories.  They provide safe havens for animals that have been abused and neglected or those that must be removed from their habitat because they pose a threat to people in the area.  Many zoos have breeding programs that play a key role in saving endangered species from around the world.

The Bronx Zoo, like many modern zoos teaches kids and adults fun facts about the animals they see in the zoo.  There are different programs and activities including penguin and sea lion feedings.  There’s also a bug carousel and camel rides at the Bronx Zoo.

Taking the kids to zoos not only allows them to see animals up close and personal, but it teaches them to wild life needs to be preserved as well.  The programs do a great job teaching kids about the importance of preserving and conserving wild life and natural habitats.

If you happen to be in the city the last two weeks of September then you must not miss the Feast of  San Genero in Little Italy!

We love, love, love the San Genero Feast!  The street is lined with carnival games and food booths.  There are 2 religious processions complete with marching bands and floats, live music, and even a cannoli eating competition!

But best of all is the food!  Every type of Italian food is offered at the many restaurants on the street.  Our favorite is Pellegrino’s Ristorante!

And don’t forget the Zeppole!