Must See Towns in Spain

Spain, home of Picasso, Gaudi, and Dali; just to name 3 of Spain’s great masters.  To many Spain invokes the sun drenched beaches of the Costa del Sol; the Prado Museum in Madrid; the cheers of the bullrings in Madrid, Seville, and Ronda; the whimsical buildings of Gaudi in Barcelona; tapas, and flamenco dancers.

Spain is all that and more!  Of course most tourists flock to Barcelona’s La Rambla and Madrid’s Plaza Mayor, and they should!  Both are definitely must see tourist stops when visiting Spain.   But there is more to Spain than it’s big cities.  A visit to the towns along the Costa del Sol, Spain’s sun coast, is a nice respite from the big cities; or a visit to northern Spain’s towns of Bilbao and Santiago de Compostela offer one a different perspective of this country that has a rich and diverse history.

Here are 5 Spanish towns that are definitely worth a visit next time you’re in Spain! 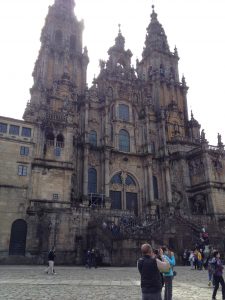 Located in North western Spain Santiago de Compostela is the capital of the autonomus community of Galicia.  The Old Town is a UNESCO World Heritage Site and has been a famous Christian pilgrimage town since the 9th. Century.

As the story goes in the early 9th. Century a hermit named Pelagius saw a light shining over a long forgotten Roman tomb in the forest.  Word quickly spread throughout the Christian world that the tomb of St. James the Greater, one of Jesus’ beloved apostles, was discovered in northwest area of the Iberian Peninsula.  Very soon a city sprang up around the  holy tomb and the site became one of the most important Christian pilgrimage towns.  Pilgrims came from all over Europe walking the route which became know as the Camino de Santiago.  Smaller towns sprang up along this route where hospitals, churches, and monasteries were built to support the Christians heading to the tomb and eventually the Cathedral that was built over the shrine.

Pilgrims from all over the world still journey to this town, many literally following in the footsteps of the 9th. century pilgrims.  It is very common and even expected to see pilgrims from all over the world with walking sticks and backpacks making their way to the town.  Tour companies even offer pilgrimage packages from France, Germany, or pretty much anywhere in Europe.

The Old Town and its surrounding monasteries and monuments are pretty much the only things in this area that’s visited by pilgrims and tourists.  The Old Town though it can be crowded with people is charming.  Beautiful Baroque, Romanesque, Gothic, and Neoclassical buildings line the narrow streets.  The Cathedral is considered a masterpiece of Romanesque architecture.  Over all in spite of the busy streets and plazas the town has a serene feel and is imbued with the feeling of devotion inspired by faithful who arduously make their way on foot to the shrine.  In my opinion it is a wonderful location to sit calmly and perhaps do a bit of soul searching. 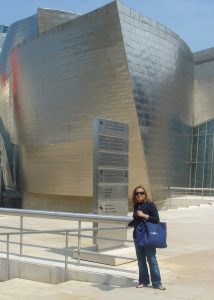 If you didn’t know the Basque Country locally known as Euskadi or País Vasco isn’t like any other part of Spain.  This region has its own language, cuisine, and geographic and cultural identity.

Bilbao is an very industrialized city built on the Nevrión river.  It’s a great place use as a base for exploring Basque Country.  Not to mention it is home to the futuristic looking Guggenheim Museum of Blibao.  This building which opened in 1997 has become an iconic emblem of Bilbao.  It’s built on the once very polluted banks of the Nevrión and has become a symbol of revitalization and marks the beginning of a new era for the city.  You can walk along the river bank for awesome views of Frank Gehry’s masterpiece, this otherworldly building that seems to undulate beneath the warm Bilbao sun. 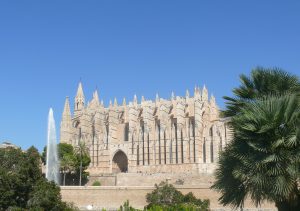 Palma de Mallorca is the capital of and the autonomus community of the Balearic Islands of Spain.  It is situated on the south coast of the island of Mallorca of the east coast of Spain.

Palma has a rich and checkered past having been conquered and ruled by the Moors then reconquered by the Christians in the 13th. Century.  But even before that was settled by the Roman and Talayotic people.  The Gothic Cathedral of Palma dominated the center of the historic city center.  Radiating from this magnificent building are narrow medieval streets lined with townhouses and Baroque churches.  It’s filled with teeming public squares, bohemian neighborhoods, and outdoor markets selling all the bounty the island has to offer.  You’ll find museums, art galleries, cafes, shops, and beaches all under the golden Spanish sun that seems to shine benevolently over the island year round.

Granada is the capital city of the province of Granada in the autonomus community of Andalusia of Spain.  It is located at the foothills of the Sierra Nevada mountains where 4 rivers (Darro, Genil, Monachil, and Beiro Rivers) meet.  Although it is but an hour’s drive from the Mediterranean Coast of Spain it sits at an elevation of 2421 feet above sea level.

Granada like many Spanish towns and cities has a rich and varied history.  The region has been populated since 5500 BC and has experienced both Roman and Visigoth rule.  In 711 AD when the Umayyads conquered the region it brought large parts of the Iberian Peninsula under Moorish rule, this included Granada.

Granada is where the Alhambra, an Arab citadel and palace, and Generalife, the pleasure palace and gardens connected to the citadel are located.

Construction of the citadel began in the 11th. century when the Castle of the Alhambra was developed into a walled town and became a stronghold that dominated the city of Granada.  Construction of the pleasure palace and gardens of the Generalife began in the late 13th. century and the Alhambra is a culmination of Nasrid art and architecture that were undertaken between the 13th. and 14th. centuries.  At this time the Alhambra was a royal residence, citadel, and fortress that housed the Nasrid sultans and their senior officers including servants of the court and elite soldiers.

In 1492 the Catholic Monarch Ferdinand and Isabella finally expelled the last of the Moors from Granada and established permanent residency in the Alhambra.  It was here that Christopher Columbus requested their endorsement for his westward voyage that same year.  Of course the Catholic Monarchs and their subsequent heirs altered the Moorish citadel to suite their needs.  Portions of the citadel were destroyed when the First French Empire had control in the 18th. Century.  Restoration of the complex began in the 19th. century and continues to this day.

In 1984 the Alhambra complex was declared a UNESCO World Heritage Site and is now the most visited tourist attraction in Spain.  Along with being a historic monument it is home to the Museum of the Alhambra and the Museum of Fine Arts.  It is definitely worth a visit!

Cartagena, Spain not to be confused with the city of the same name in Columbia, is a city in the autonomus community of Murcia in Spain’s southeastern Mediterranean coast.  It is also where one of Spain’s major naval stations is located.

Cartagena has been inhabited for over two millennia having been founded in 227 BC by the Carthaginian Hasdubral the Fair.  It was an important port city both during the rule under the Holy Roman Empire and the Umayyad Empire.

The mix of civilizations as well as its strategic harbor in Cartegena has resulted in a unique mix of artistic heritage.  Here you will find an abundance of Phoenician, Roman, Byzantine, and Moorish artifacts and landmarks including the remains of a Roman theater second largest on the Iberian Peninsula.  Wandering the streets and plazas you will find them lined with a plethora of Art Nouveau buildings including this impressive City Hall which greets tourists walking into the city from the cruise terminal.

It’s a small and compact city and very walkable.  You can find the remains of the Punic ramparts along the hill, and the restored Roman Theater as well as the Roman Colonnade and the House of Fortune in the city center.

You can also catch the elevator or walk up the Castillo de la Concepción where you’ll find excellent views of the town, the harbor, and the mountains.

Then you can wander around Calle Mayor the pedestrian street paved with blue marble that connects the Plaza de San Sebastián to the city hall.  It’s lined with modernist buildings that are home to trendy shops, bars, and restaurants.  Don’t be afraid to grab a table for some tasty tapas and a glass of wine as you watch the world pass by!

Ready for that Spanish getaway?  Call Savvy Nana Travel, we specialize in family and group travel!