Matera Day Trip- A Step Back in Time 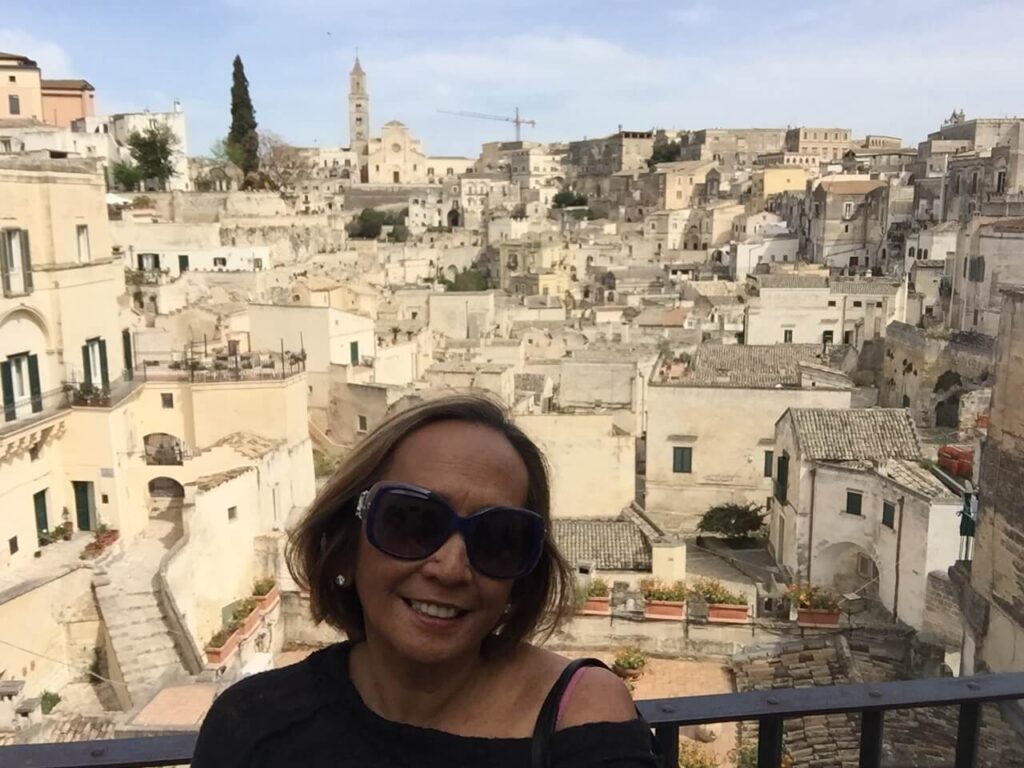 Matera.  Ancient city,  shame of Italy, or hidden gem, which describes Matera best?  The answer, all of the above.

Matera is a city and a province in the Basilicata region of Southern Italy; the area we fondly refer to as the heel of the boot.

The modern city like any other thriving city is filled with apartment buildings, businesses, and traffic.  But that’s not the Matera people come to see.  They travel there to see the Sassi districts, the historical city center whose buildings are built in caves on the walls of a steep ravine carved out over millennia by the Gravina River.

The Sassi (Italian word for “the stones”) di Matera is divided into two districts, Sasso Caveoso and Sasso Barisano (named so because it lies in the direction of Bari).  The Sassi districts along with the collection of  Rupestrian (made of rock)  Churches have been a UNESCO World Heritage Site since 1993. 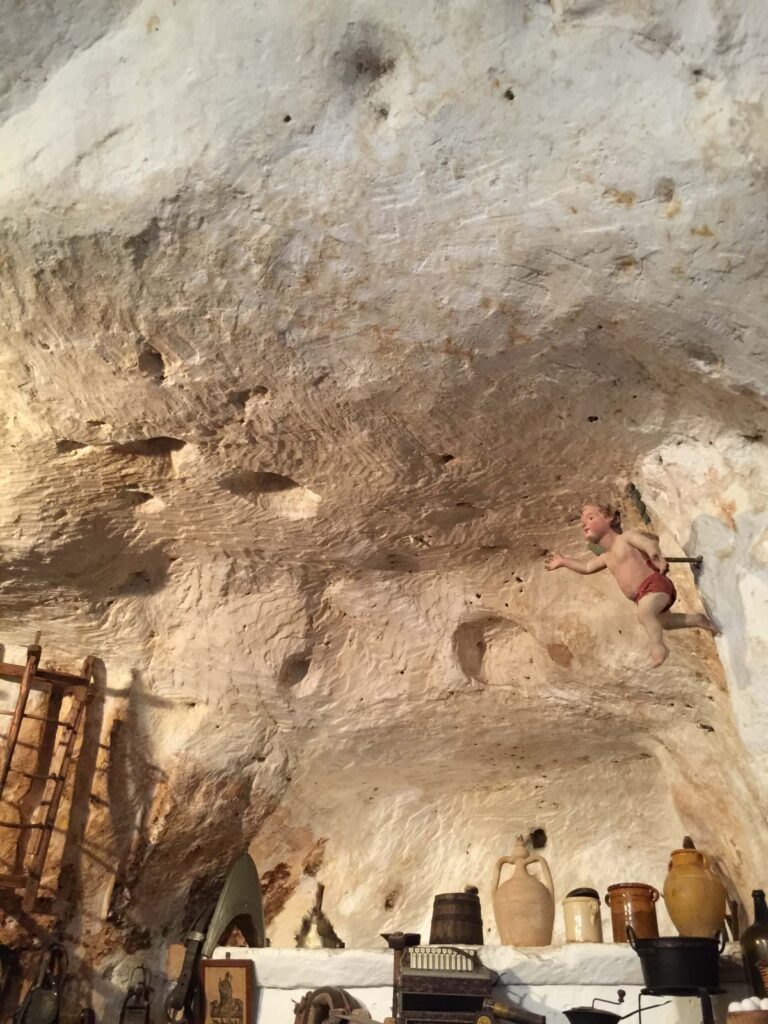 Long before the site earned its esteemed UNESCO designation the Sassi caves were already occupied.  They were first occupied in the Paleolithic Age some 7000 years ago.  In fact it may be one of the longest continuously inhabited human settlements in the world.

Over the centuries local peasants and artisans gradually burrowed deeper into the natural soft limestone caves to create and expand living spaces.  Over time “buildings” were built on top of  and beside existing structures until some 1,500 cave dwellings filled the canyon. 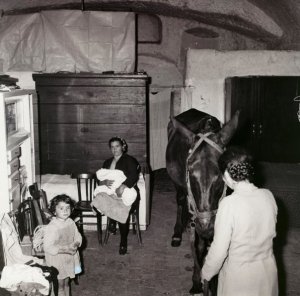 By the 1950’s this ancient warren had become a slum housing as much as 16,000 people in horrific conditions.  It became known as “the shame of Italy” for its dismal poverty, unsanitary living conditions, and high mortality.  At this time the government forcibly relocated Sassi residents to government housing essentially abandoning the entire settlement.

The ancient Sassi stood abandoned into the 1980’s.  Its cave dwellings uninhabitable.  All this now government owned real estate was pretty much considered an area of poverty and given over to nature and the wolves.

This changed by the 1990’s when enterprising residents with the aid of the government began modernizing and renovating the caves.  They’ve installed plumbing, electricity, ventilation, and even wi-fi.  Cave hotels, cafes, and restaurants started cropping up and attracting tourist dollars.  There’s still a lot to be done to modernize the entire area, but it has become the hip destination in Italy.

This fall we had the pleasure of visiting this amazing city.  We took a day trip from our base in nearby Bari.  It was easy enough to do and was definitely worth the time!

A visit to the Sassi di Matera is like stepping back in time.  Think first century Jerusalem!  The cave dwellings with their stone facades easily transport you to Biblical times.  Indeed it so resembles ancient cities that film makers have used Matera as the setting for many Biblical movies and TV shows.  Movies filmed there include most notably Mel Gibson’s Passion of the Christ (2004) and Timur Bekmambetov’s Ben-Hur (2016).  Most recently it was used in Patty Jenkins’ Wonder Woman (2017). 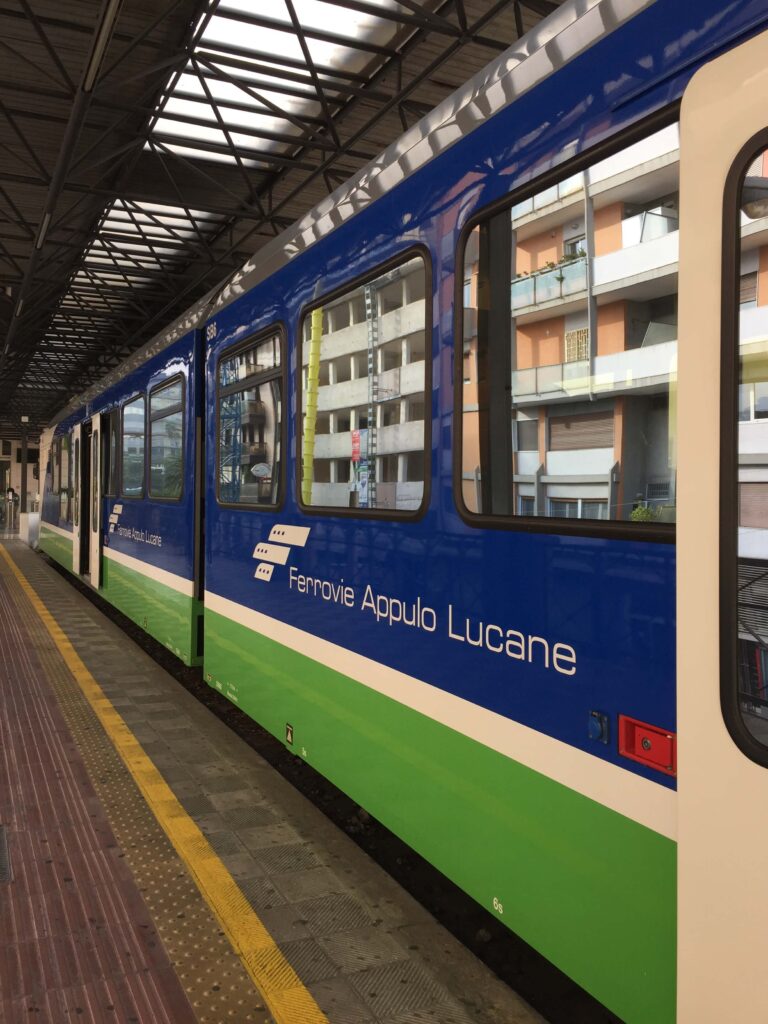 We took the 10:05 Appulo Lucane train from Bari Centrale arriving in Matera Sud just before noon.  Plenty of time to walk to the Piazetta Pascoli and grab a quick lunch before meeting up with our tour guide Antonio in front of the Palazzo Lanfranchi located at the top of the piazetta.  (The Palazzo is home to the National Museum of Medieval and Modern Art.)

The Piazetta Pascoli is the perfect spot to catch your first glimpse of the Sassi.

The viewpoint on the left of the Palazzo Lanfranchi offers a panoramic view of Sasso Caveoso.

The viewpoint sits at the rim of the canyon and allows you to look down into the Sasso built on its side and across to the caves on the opposite side.  The entrance to Sasso Caveoso is located right off the viewpoint.  It’s the perfect place to begin your trek down into the ancient town. 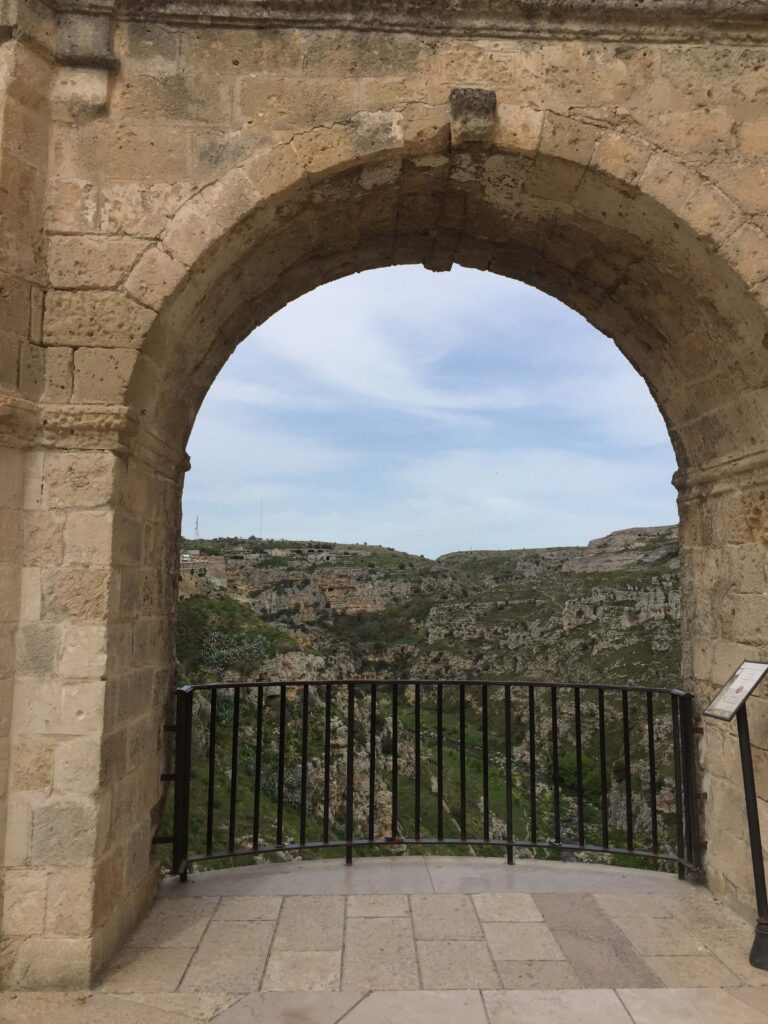 Antonio, our local tour guide, started our tour at the viewpoint.  There he gave us some history of the Sassi and other interesting facts.  We then proceeded down the narrow walkway into the heart of the district.

Along the way Antonio pointed out interesting things such as the natural rock protruding from some of the modern building facades.

Many of the structures we passed were renovated or in the process of renovation.  Some had been turned into hotels, restaurants, and shops.  But I’d say an equal number of cave dwellings still laid abandoned awaiting a savvy entrepreneur to begin its transformation.

There are several preserved buildings that can be visited, the churches, cisterns, and even some restored homes have become museums that give visitors a peek at how they were back in the day. 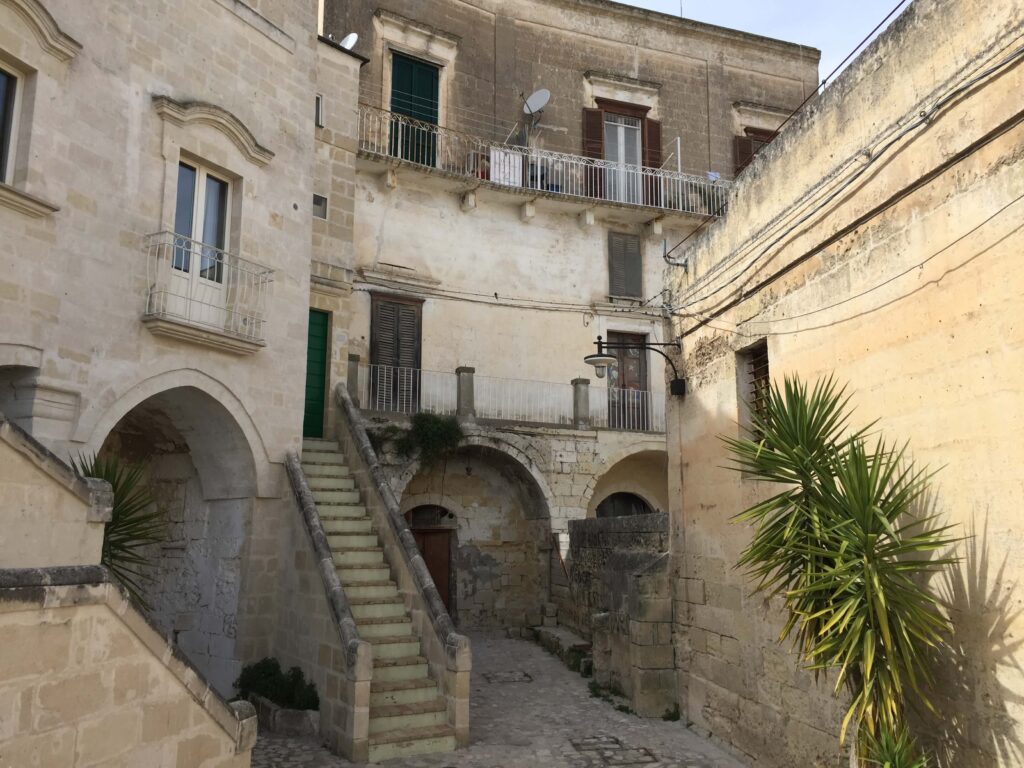 One of the building we entered (admission is €3 per person) is the Palombaro or cistern.  This water collection system is the main reason the Sassi di Matera became a UNESCO World Heritage site.

This vast cavern fully excavated in the rock is 15 meters deep.  It collected rainwater that was channeled to it from the top via a system of interconnecting cisterns.

You can also view a small well that provided water to a specific house.  These wells were prevalent in the dwellings and I believe their overflow was channeled into the larger cisterns in the town.

The excavation has been dated back to the 9th. century.  It was used as a church by a community of Benedictine monks until 1283.  In 1797 a new church was constructed in the same caves.

The small church is laid out in the typical basilica style with 3 aisles.  Only the right aisle was used for worship.  The remaining aisles served various uses mainly habitation by humans and animals.  All that remains are frescoes that date between the 11th. and 17th. centuries depicting various icons including the Virgin Mary, Michael the Archangel, and Saints John the Baptist and Benedict.  There are also visible signs of the columns that once stood in the church.  The columns were dismantled and recycled to create the kitchen when the area was used for housing. 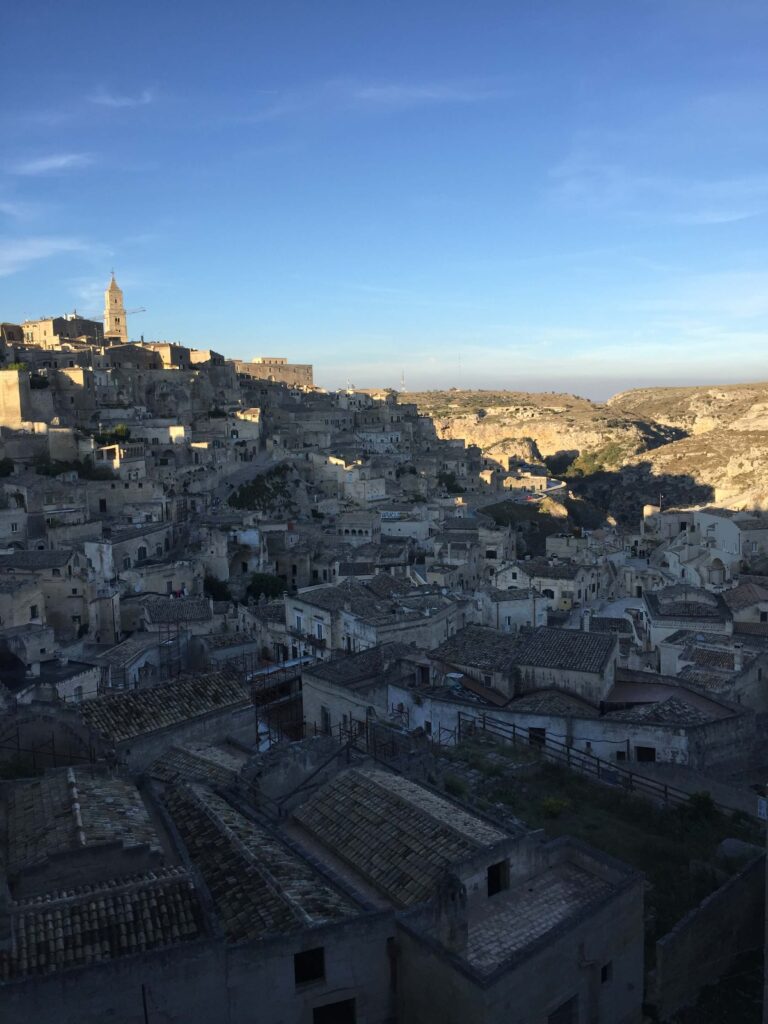 We walked down to a clearing at the bottom of the settlement.  The clearing once served as the town’s cemetery.  The remains have been moved although one can still see outlines of the graves.  From this vantage point you get a clear view of the river that carved this gorge as well as the caves on the opposite wall.

More adventurous folks can drive to the opposite side to explore the caves and hike down to the river.  There’s a bridge that connects the two sides, but when we were there the bridge was closed.

Our guided tour ended at this point.  Antonio encouraged us to explore on our own but we chose to head over to cafe for some much needed refreshments. 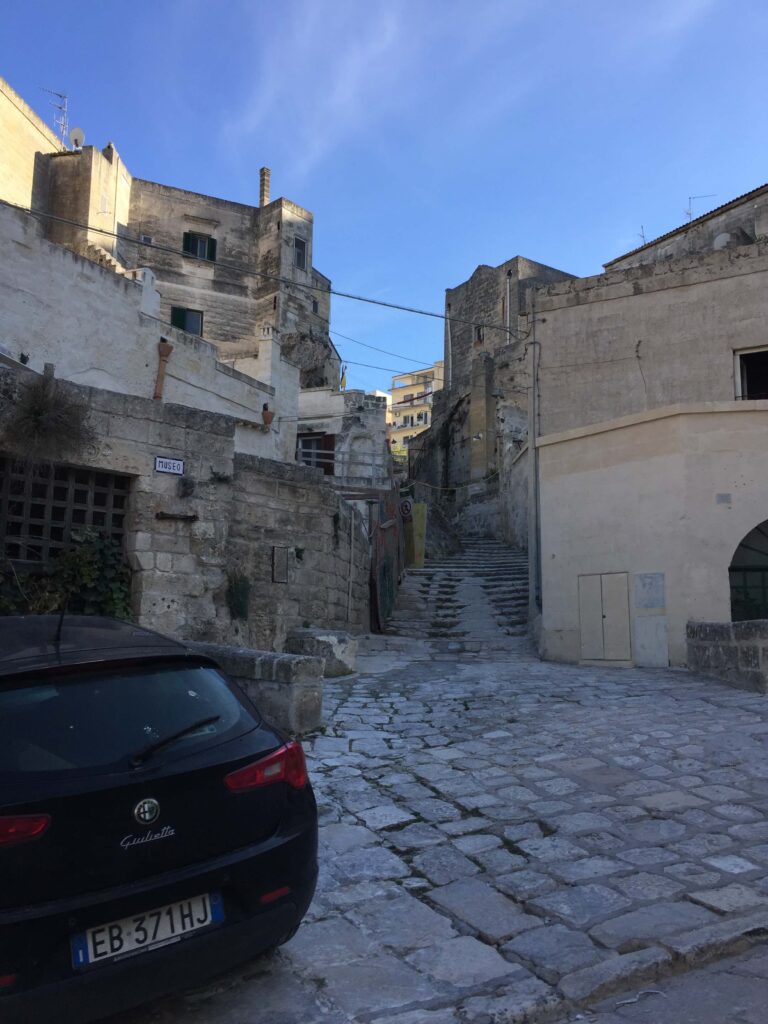 The bustling cafe sits in a little piazza on the lowest street of the Sasso.   From here you can explore the the other churches and museums located in Sasso Caveoso or take the road that connects to Sasso Barisano.  You can also walk or ride up the stone street to exit the ancient district. 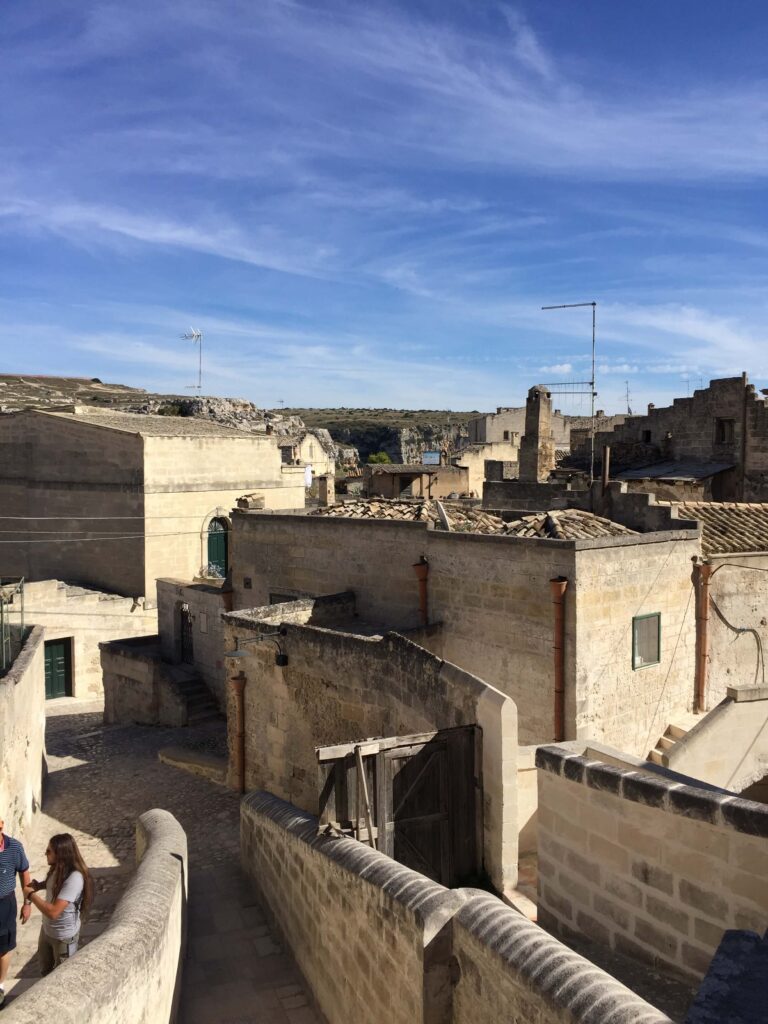 We chose to ride the motorized “taxi” (I called them tuk-tuks because they are similar to the motorized vehicles I ride all over Bangkok.)  Our driver dropped us off in front of the Cathedral which is located in the modern district at Piazza Duomo. 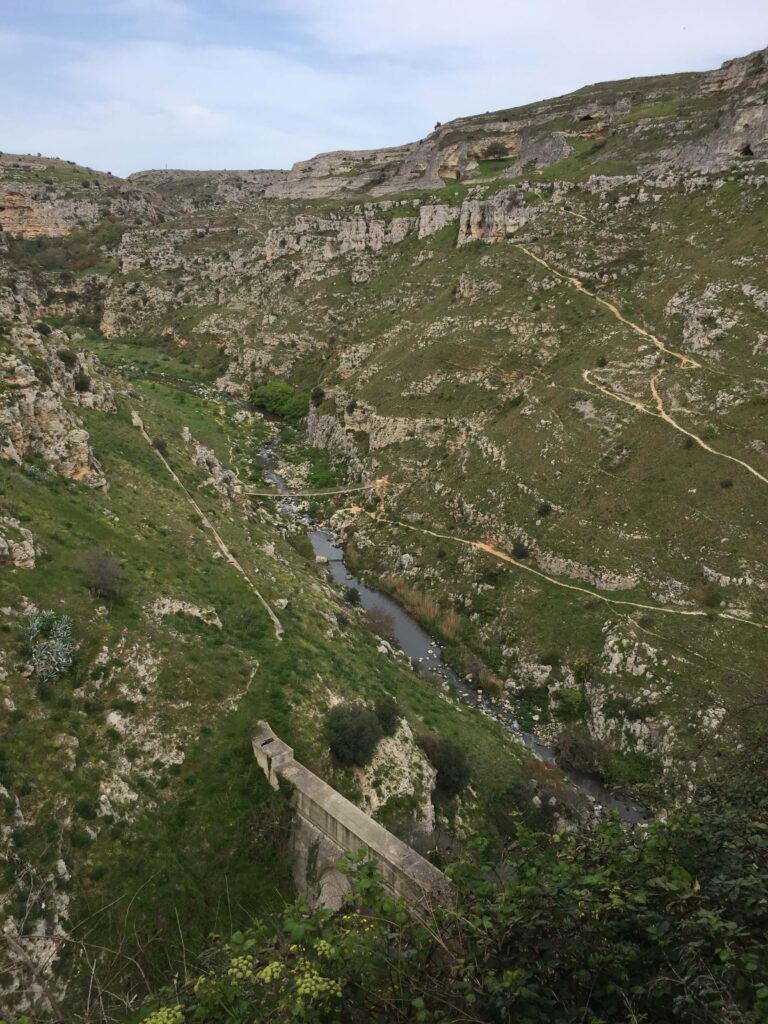 Around Piazza Duomo you can find panoramic viewpoints that overlook the Sasso Barisano.  You can also find entrances to this part of the Sassi.

If you have the energy, we did not, you can trek on down Sasso Barisano and visit more churches and museums located in this area.

Otherwise you can stroll down this pedestrian zone to Piazza del Sedile and Piazza San Francesco d’Assisi where you’ll find the church of the same name.

Further along you’ll find yourself back at Piazzetta Pascoli where if you’re ready you can head back to the train station and return to Bari.  Or you can explore the modern city of Matera where you’ll find the archaeological museum, Castello Tramontano, and a host of other churches.

We elected to return to Bari and luckily the next train back was still at the station.

Our day trip to Matera was one of the highlights of our stay in Puglia.  Hiring a local tour guide was the best decision we made, Antonio Manicone of Matera Tour Guide made the day memorable.  He was well informed, friendly and very helpful.  I will not hesitate to recommend him to friends and family planning to visit Matera.

I believe a tour guide is a must, specially for first time visitors.  Guides will explain the history of the district, answer any questions you may have, and point out interesting features in the Sassi.  The Tourist Information booth on the corner of Via P. Vena and Via Lucana is a good first stop.  There you can pickup a map and also book a Sassi tour.  They have scheduled group tours for €20 per person.

We had booked Antonio’s tour before we ever left home.  It was a bit more costly as it was a private tour, but it was well worth it.  Antonio emailed me train schedules and maps to help me get to Matera and our meeting point.  He answered all of my questions via email weeks before we ever met.  His company offers group, semi-private, and private tours; in short he’s got something for every budget!

Click here for more information about Matera Tour Guide. Or email Antonio at info@materatourguide.it, tell him Savvy Nana sent you!

Getting to Matera from Bari Centrale: 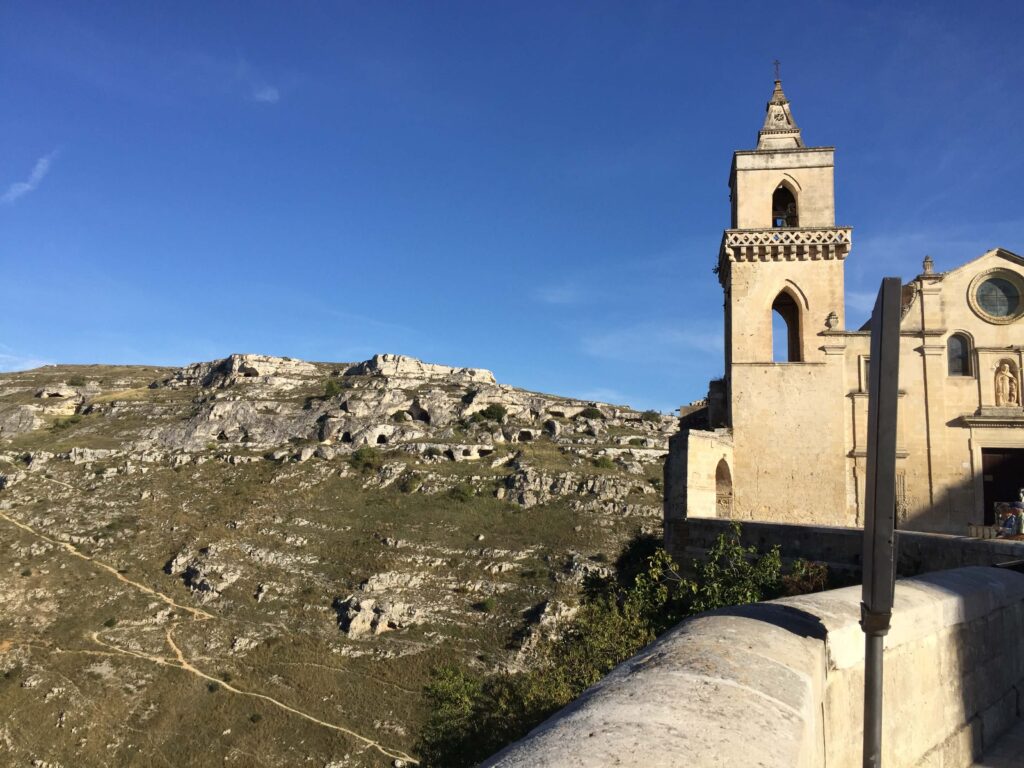 At Bari Centrale (the main train station) head to the Ferrovie Appulo Lucane Station located on the right side of the Main station buillding.

Once you have the ticket go to the end of the hallway and up the stairs to the platform.  There are 2 tracks.  Be sure you take the train that says Matera Sud, this train goes directly, but slowly to Matera.  Matera Sud is the last stop.  The Matera Sud trains leave from Bari about every hour or so.

If you can’t find a train to fit  your schedule you can buy a ticket to Matera Sud and get on the train from Bari Centrale to Altamura.  At Altamura you can transfer on to a train to Matera.  You don’t have to worry there are only 2 tracks at the Altamura train station and the trains will clearly state their destination on every car.

The ride to Matera is about an hour and forty five minutes.

Matera has 3 stops.  The ones closest to the Sassi are Matera Centrale and Matera Sud.  Centrale is closer to Sasso Barisano and Sud to Sasso Caveoso.  Either one works, but I prefer Matera Sud, it’s a shorter walk to the Sassi.

Getting to the Sassi Districts from the train stations:

Get off at Matera Centrale and walk down Via Roma to Piazza Veneto.  It’s about a 15 minute walk.

At the piazza you’ll find a viewpoint overlooking Sasso Barisano and stairs leading into this area.

Get off at Matera Sud and walk down Via P. Vena to Via Lucana.

Turn right and cross the street.  In about 10 feet or less you will spot a small alley called Via Duni on your left; walk down this alley and it will lead you to Piazzetta Pascoli.  It’s a 7 minute walk.

Palazzo Lanfranchi will be on your right, walk straight ahead to the viewpoint and the stairs leading into the Sasso.