Half Day at Ferrari World is More than Enough 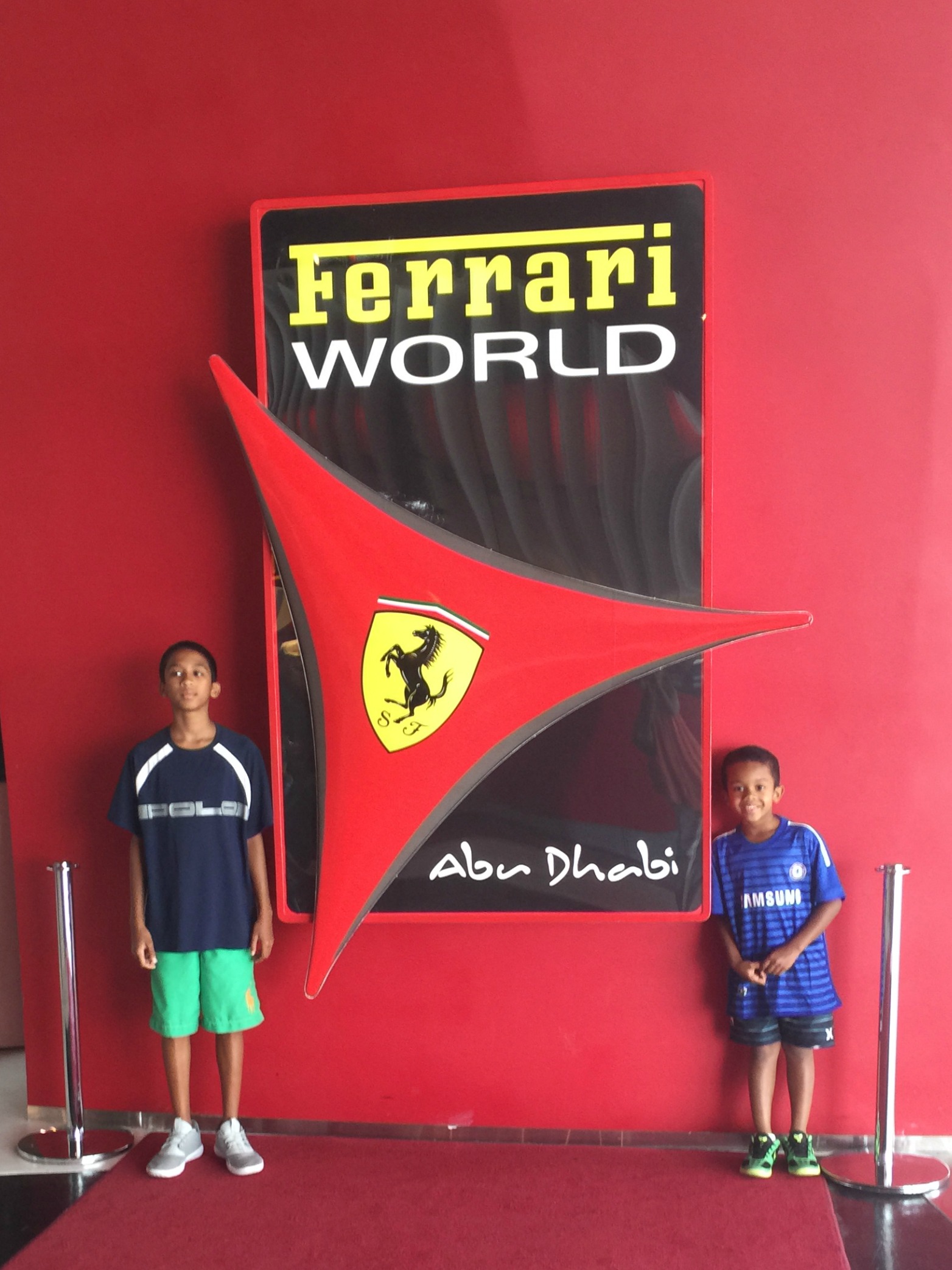 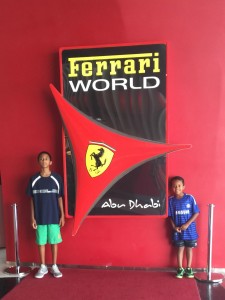 Yas Island is an entertainment Mecca filled with theme parks, malls, theaters, hotels, and restaurants.  You could spend your entire vacation without ever having to leave the island.

We took a day trip over to Abu Dhabi when we were in Dubai last summer.  It’s about a 1 hour drive.  We left bright and early on a weekday morning, we wanted to beat the crowds at Ferrari World. We arrived about 9:30 a.m., Ferrari World doesn’t open until 11:00 a.m.

We parked at Yas Mall, Ferrari World is connected to the mall, and spent the time wandering the shops.  The boys were quite impressed with the Lego Store and The Toy Store.

They loved the huge Transformer Optimus Prime standing at the entrance to The Toy Store, a Dubai based brand that is a kid’s dream.  The store is filled with displays of popular toys that kids can touch and play with.  The boys would have happily stayed at The Toy Store but we had to drag them away and head for Ferrari World. 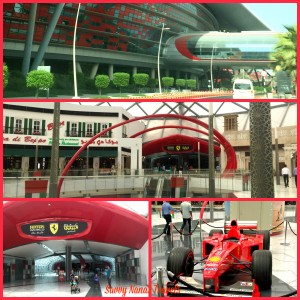 The theme park is accessed from the mall’s second floor which connects them via a walk way.  You’ll know you’re headed in the right direction when you see the red Formula 1 Ferrari race car in the middle of the mall.

The entrance to the park is located next to the mall’s Cascade Dining area, a multi-cuisine food court featuring Buca di Beppo, Chili’s, and more.

If you haven’t purchased tickets online, we didn’t, you can buy them from the ticket counter located on the right side after the walk way.  The Ferrari Store is on the left. 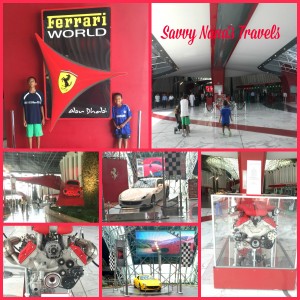 Tickets start at 250 AED for a one day one park adult Bronze ticket which gives you unlimited park access for the day and a 5 AED merchandise voucher to spend at the Ferrari Store.  Kids under 1.3 meters cost 205 AED, and kids under 3 are free. Silver and Gold tickets cost more but they come with 3 fast pass and 10 AED voucher (silver) or unlimited fast pass and 15 AED voucher (gold).  You can upgrade Bronze and Gold tickets to one day 2 park tickets for 40 AED and 130 AED respectively.  They both give unlimited access to both Ferrari World and Yas Waterworld on the same day; the Gold ticket comes with priority seating and souvenir towel at the waterpark.  The combined ticket is a good deal if you have enough time to go to both parks on the same day.  The ticket agents are helpful and will let you know if it’s doable to go to both parks, if the parks are busy they will recommend against it.

The first thing we did was head to the Karting Academy, a go-kart type ride,  to book our ride. When you get there you will be directed to a computer where you must schedule a ride for your party, you will be given a ticket that tells you when to come back for your ride.

When you return at your designated time you must change into the racing suits and shoes they provide.  Then you must sit thru driving instructions and will be given a paper helmet to wear.  Before you get into your race car you will be given a helmet which you must wear during the ride.

It’s a fun ride.  We took turns riding because someone had to stay with 7 year old Devon, and 2 year old Jett, they weren’t allowed on this ride. 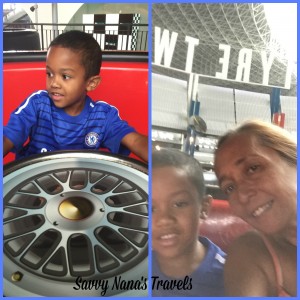 Right by the Karting Academy is the Tyre Twist, a ride very much like Disney’s teacup ride, but instead of a teacup you’re twirling in an huge tire.  Devon was allowed on this ride, but Jett was not. 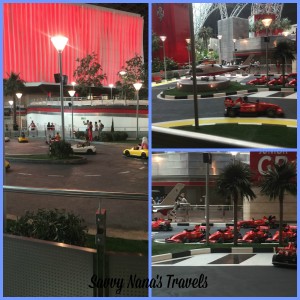 The Junior GT and Junior Grand Prix rides were also in this area.  These rides are slow paced electric cars kids can drive around a track.  Devon was not pleased, he wanted something that  went faster than a turtle.

The Bell ‘Italia ride is also here.  It’s a slow paced ride where you can sit in vintage Ferraris and ride around a miniature Italy.

Other family rides include Viaggio Italia where you sit in seats that rise in the projection dome and you appear to be flying over Italy.  There’s also a cinematic simulator ride that gives you the shotgun seat behind a race car driver.

There’s also the Galleria Ferrari where you can get an up close and personal look at these beautiful cars.  Ferrari fans will think they’re in heaven!

Another thrill ride by the Karting Academy is the Scuderia Challenge, a racing simulator.  We didn’t try this one, it costs an extra 100 AED per person to ride. 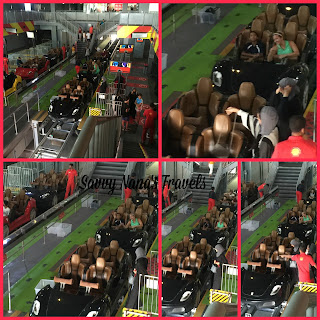 The Fiorano GT Challenge is one of the 2 roller coasters in the park.  The dueling  Ferrari F430 Spider cars race around twin tracks at 95 km/hr. My daughter Jaime and 13 year old grandson Dion rode the coaster while the younger boys and I watched them from the outdoor viewing area. 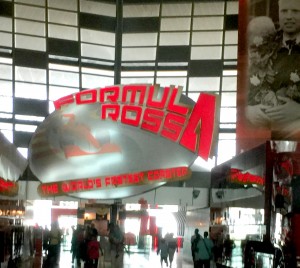 Formula Rossa, currently the world’s fastest coaster, is the park’s main attraction.  This coaster goes from 0-240 km/hr in under 5 seconds.  Jaime and Dion went on this coaster too while I tried to get Devon into the Junior Training Camp.

The Junior Training Camp is all about climbing, they have all kids of walls and equipment.  Alas Devon did not meet the minimum height requirement, he was not pleased. 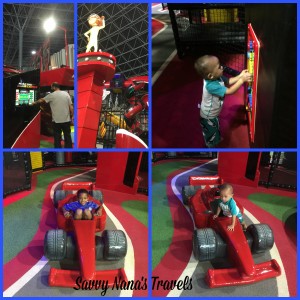 Instead we spent our time in the kid’s play area where Jett and Devon ran around, climbed small steps, and went down not too tall slides.

Lucky for us we purchased the 2 park ticket, the younger kids has much more fun at the waterpark.  We were done with all the rides we wanted to go on by 2:00 p.m., and this included shopping in the Ferrari Store.

I had somehow (I still don’t know how) ended up with 120 AED worth of merchandise vouchers.
The boys ended up with a bunch of Ferrari stuff, and I only spent 50 AED in real money.  The Ferrari Store was the best part of the park for Devon and Jett who each picked out a logo shirt and toy.

The park is rather pricey given that they don’t have very many rides.  If you’re a big Ferrari fan or need to ride the world’s fastest coaster than the $68 ticket may be worth it.  If you have kids under 1.3 meters the $56 ticket in my opinion isn’t worth it, there’s not much there for them to do.  For toddlers under 3 it’s free, and they do have a great time running around the cool play area.  Jett loved the Ferrari!

The best buy would be to purchase the 2 park ticket assuming you can go to both parks on the same day.  If Ferrari World isn’t busy you really don’t need more than 3-4 hours there.  Tickets for Yas Waterworld for one day is the same price as Ferrari World, so the 40 AED upgrade is really worth it, besides on hot days it’s perfect.  You do Ferrari World, which is indoors in the morning then head over to the outdoor waterpark later in the afternoon when it’s not so hot. 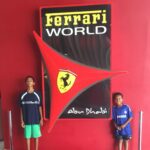 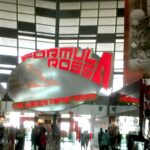 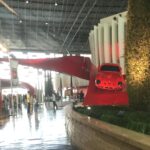 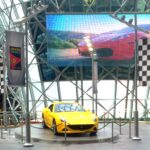 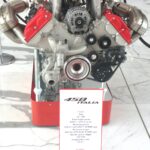 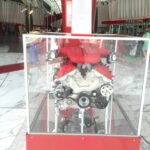 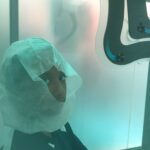 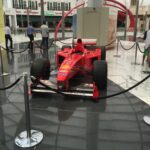 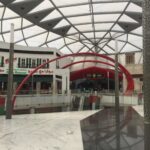 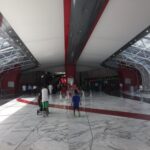 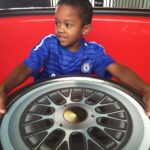 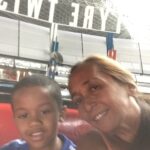 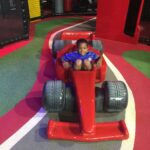 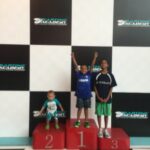 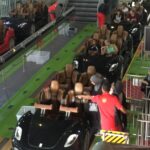 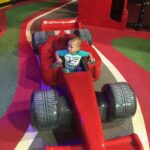