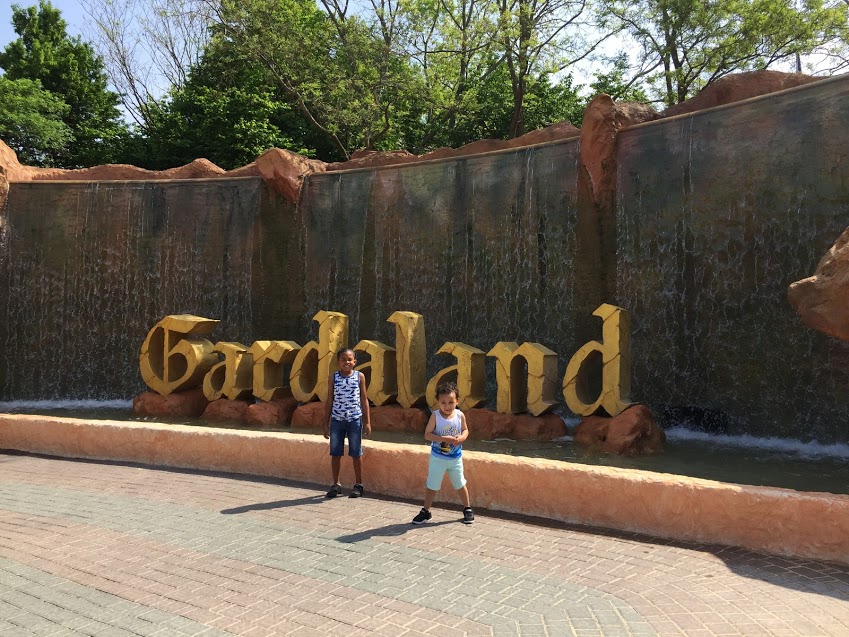 Located in the outskirts of Verona in the Veneto region of North-Eastern Italy is Gardaland Resort , an amusement park complex adjacent to Lake Garda.

First opened on July 9, 1975 Gardaland Resort has grown and now is composed of Gardaland Park, Sea Life Aquarium, Gardaland Hotel, and Gardaland Adventure Hotel.  The hotels offer themed rooms such as the Prezzemolo room, pirate and princess rooms, and more.

Although it’s adjacent to Lake Garda the Amusement parks and hotels don’t face the water.  In fact if you’re in the park you don’t even see Lake Garda.  You’re in a totally different world! 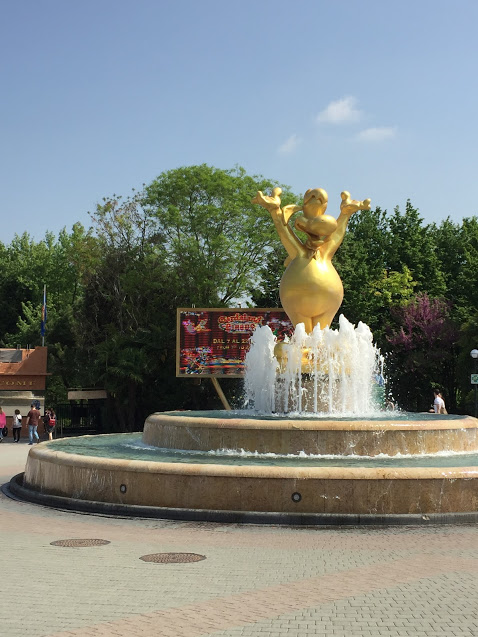 We had took the grandkids to Gardaland last spring, it’s about and hour by car from my daughter’s house in Vicenza.  We had a great time!  The park has something for kids of all ages.

It’s sort of Disneyland, Universal Studios, and Six Flags all rolled into one huge theme park complete with a castle guarded by Prezzemolo a long eared green dragon.  Prezzemolo also serves as the park mascot! 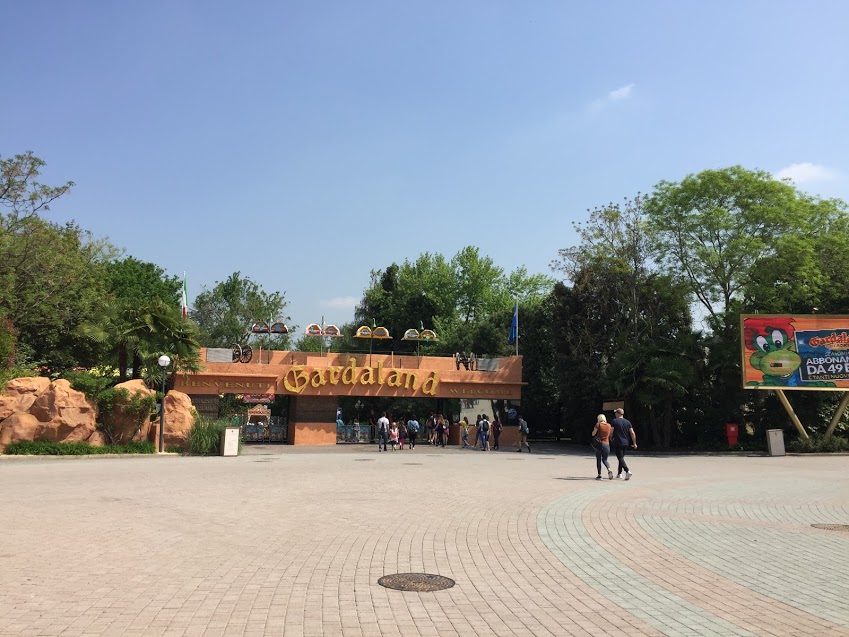 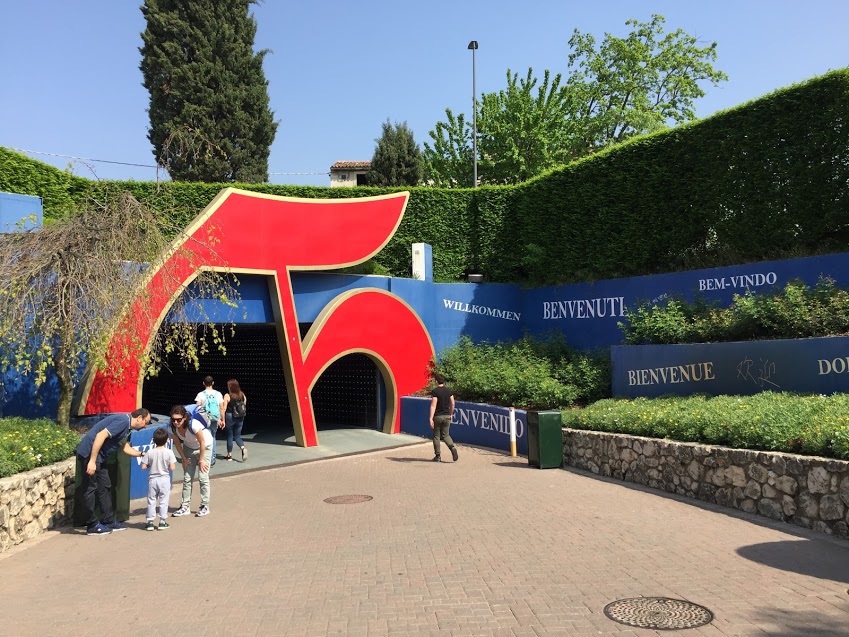 To get inside the park you go through the gates and walk through a lighted tunnel.  It’s actually pretty cool!

You’re welcomed into the park in a variety of languages.  On the other side of the tunnel you’ll find yourself right at the entrance to Peppa Pig Land. 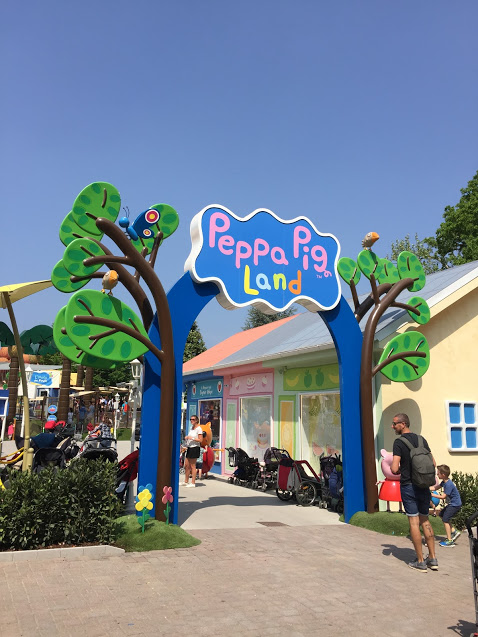 Peppa Pig Land is the newest addition to Gardaland Park.  It opened in the Spring of 2018, in short just a few days before wewent.

This area as you can well imagine is geared towards toddlers.  There are 4 rides in this area:  Train, Boat, and Balloon Rides, and Peppa’s house. 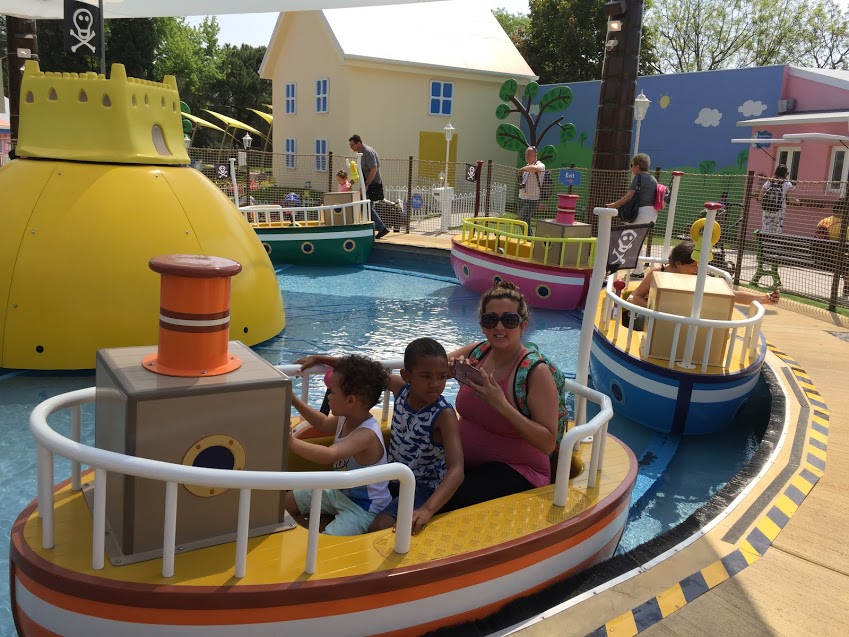 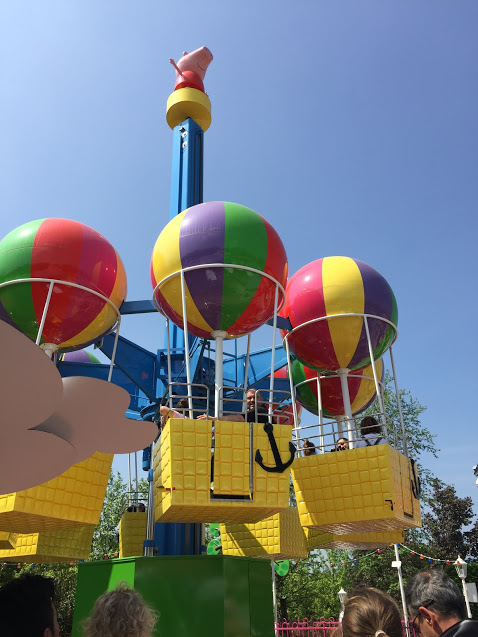 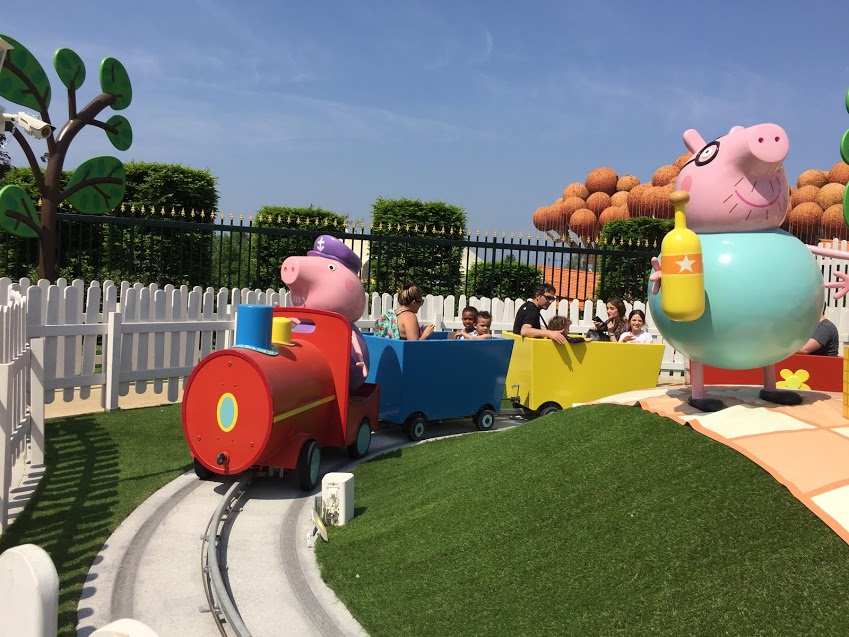 And of course there’s the souvenir shop that stocks everything Peppa Pig.  You might want to talk your toddler into waiting for a Peppa Pig souvenir until you’re ready to go home.  You don’t want to carry it around the park and you’ll have to pass the Peppa Pig shop on your way out anyway.  That’s what we did!

Once you’re done with Peppa Pig Land you’re ready to head for the rest of the park.  Of course if you don’t have toddlers you might want to skip the Pig Land and make your way down to the thrill rides.  Whatever you decide don’t head down the hill without a park map.  If you didn’t get one at the ticket office you can get one at the kiosk right out side Peppa Pig Land.

Just to be clear so you’re prepared the park is built on several levels.  You start out at the top and head down to the lower levels.  Just remember what goes down eventually must walk back up. 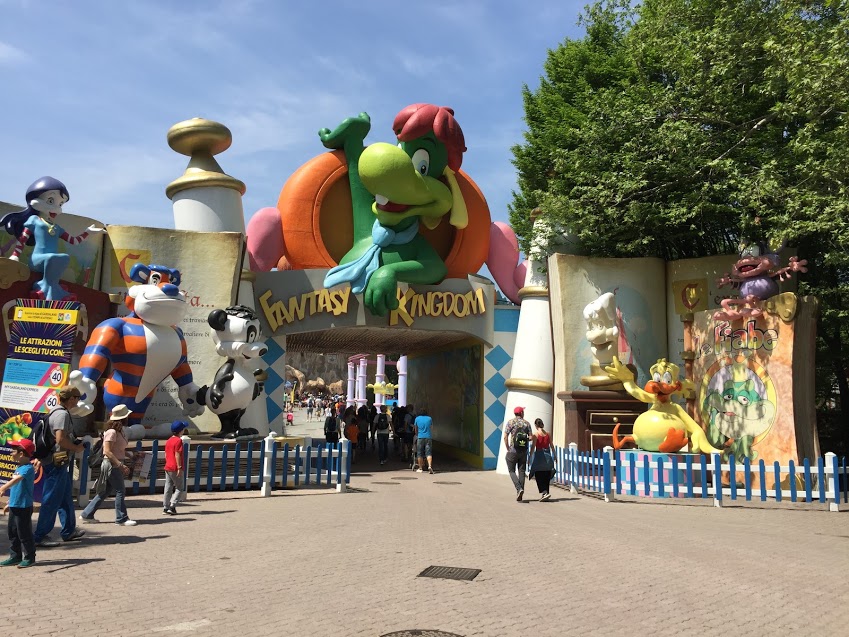 When you get down the hill you’ve got choices to make.  On your left is the entrance to Fantasy Kingdom where you’ll find basically rides geared for the younger kids. 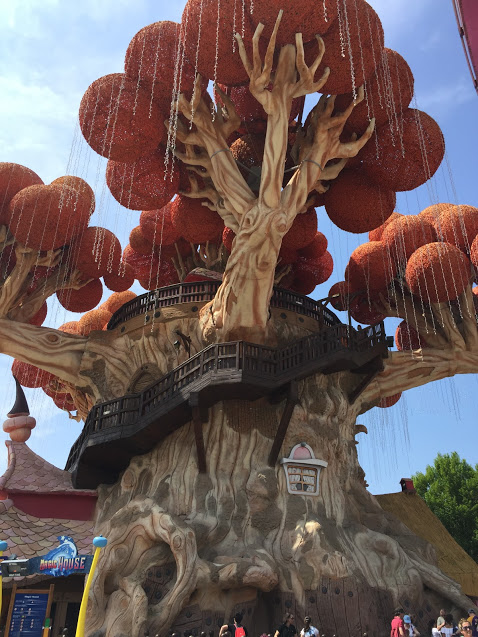 Like Prezzemolo’s Tree and the Volaplano which rides you around the area on track built above the walkways. 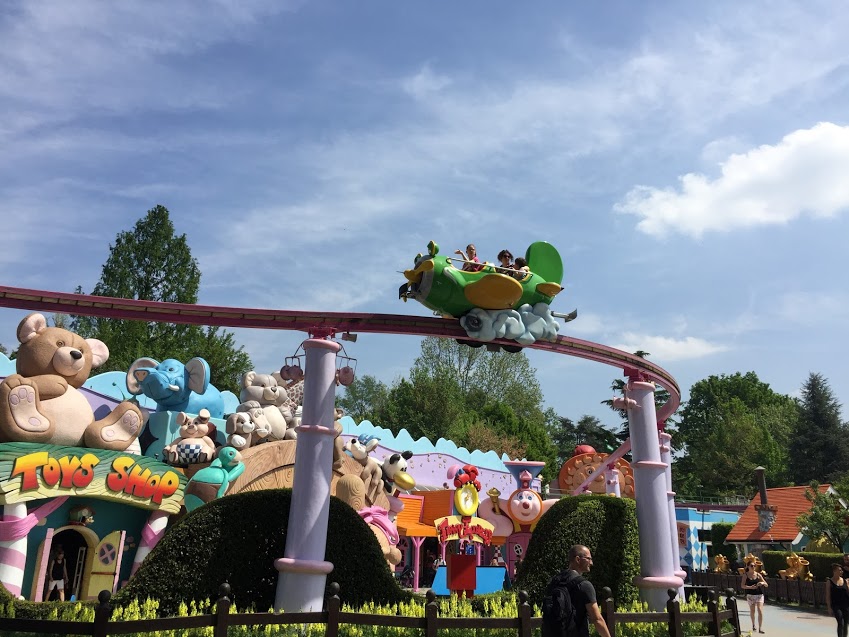 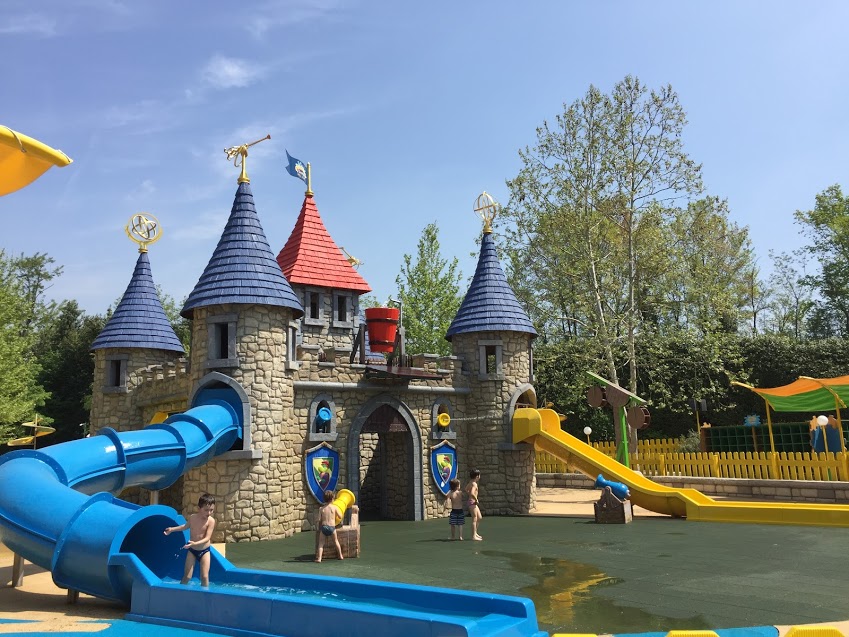 Opposite Fantasy Kingdom is the medieval area where you’ll find a 2 story carousel, restaurants and snack bars, and Prezzemolo Land.

Prezzemolo Land is basically a splash pad with water slides, water cannons, and the big water dumping bucket.  You’ll find changing rooms near the splash pad to change into dry clothes after cooling off in the water.  And if you forgot the kid’s swimsuit there’s a kiosk right in front to sell you one! 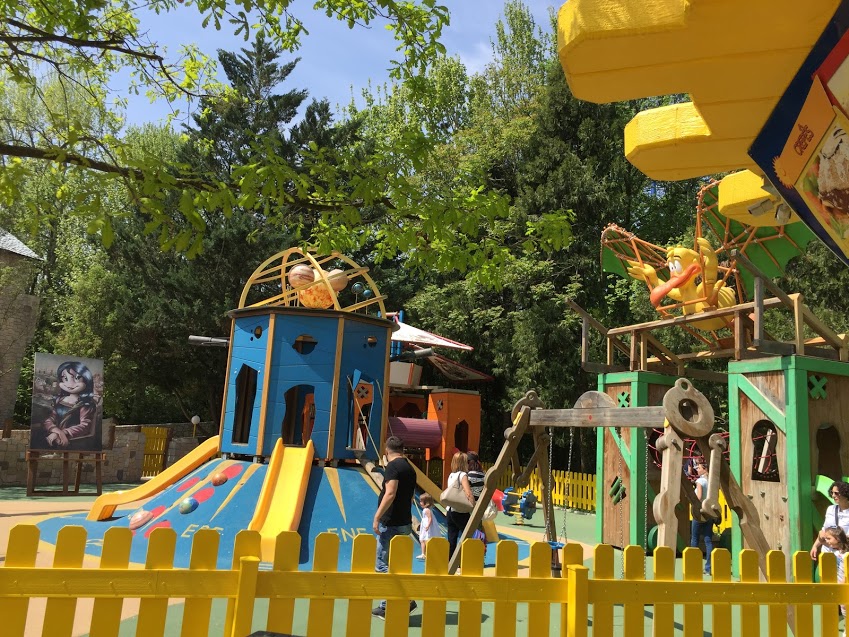 If you’d rather the kids not get wet you can let them burn off some energy at the playground next door.

There are also built in trampolines for the kids to bounce on in this area.  And I believe there’s a train stop around to catch the Transgardaland Express.  You might want to hop on for a tour of the park and catch the view of Lake Garda beyond.

But seriously the kids didn’t go to the park to ride a train or romp around the splash zone.  They went to RIDE!

Depending on their age there are adventure and thrill rides that should suit them. 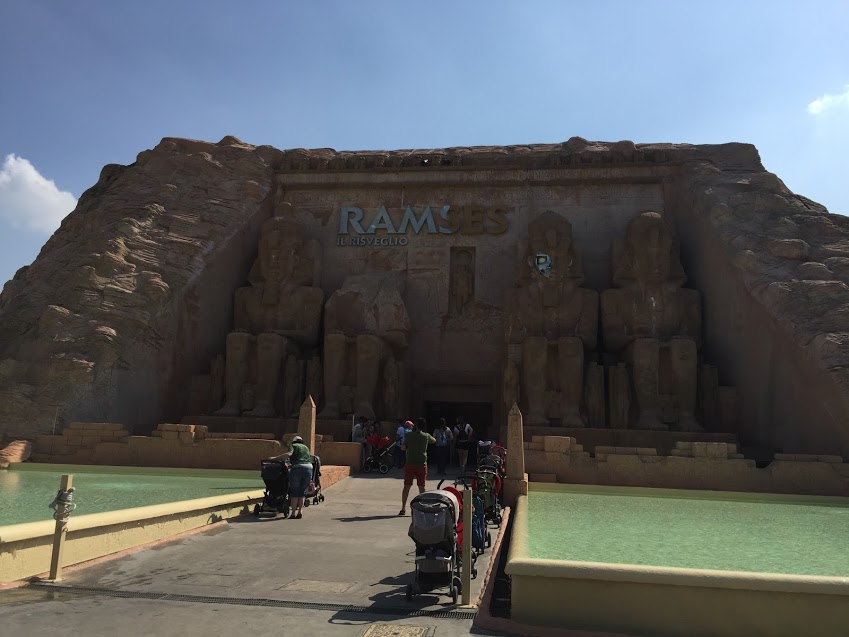 Younger kids will enjoy the Ramses ride.  I know our boys loved it.

This is where Disneyland meets Universal Studios, sort of.  This ride is a treat!  You ride around a high tech Egyptian tomb (or is it a village) in a car and shoot the bad guys with a “laser gun” mounted in front of you.

It brings to mind the Mummy ride they once had at Universal Studios Hollywood and the Buzz Lightyear ride in Disneyland. 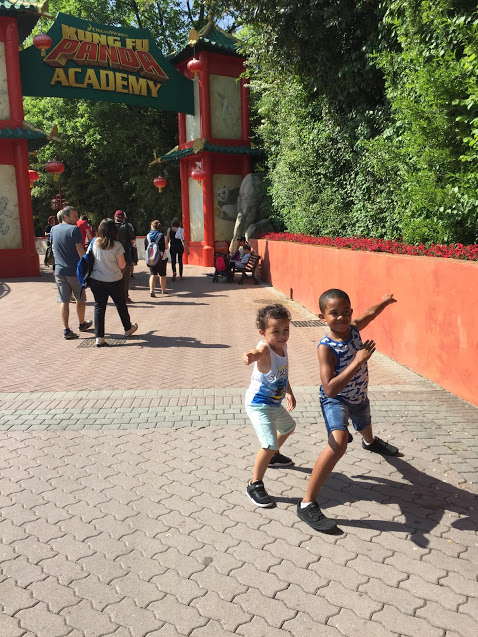 Around this general area you’ll also find the Kung Fu Panda Academy where there’s a small roller coaster and the Noodle Bowl ride, it’s the same thing as Disney’s teacups, but you’re spinning around in a bowl instead of a cup! 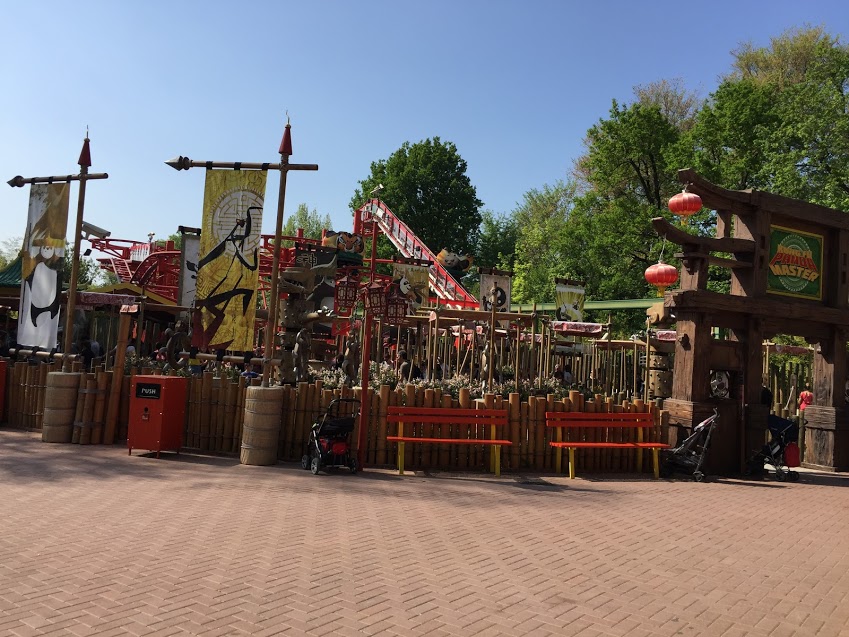 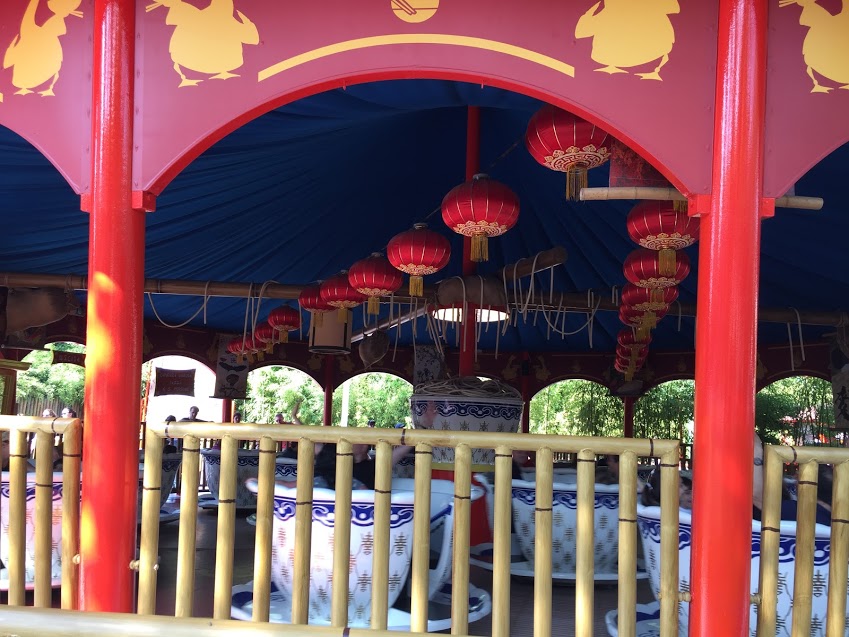 Other rides in this category are the San Andreas 4-D ride, the Colorado Boat rides, the Mammut a train/coaster ride, and the Jungle Rapids raft rides.

You’ll find the other rides dispersed through out the park.  This is why you need a map!

Most of the rides I just mentioned are located pretty much at the lowest level of the park area.

Some of them are located above and you can get to them directly if you go straight from the bottom the hill you came down on when you first entered the park.

I know it’s sort of confusing even with the map, but the folks working there, specially the security people are very helpful even though many of them don’t speak English.  They try very hard to point you in the right direction! 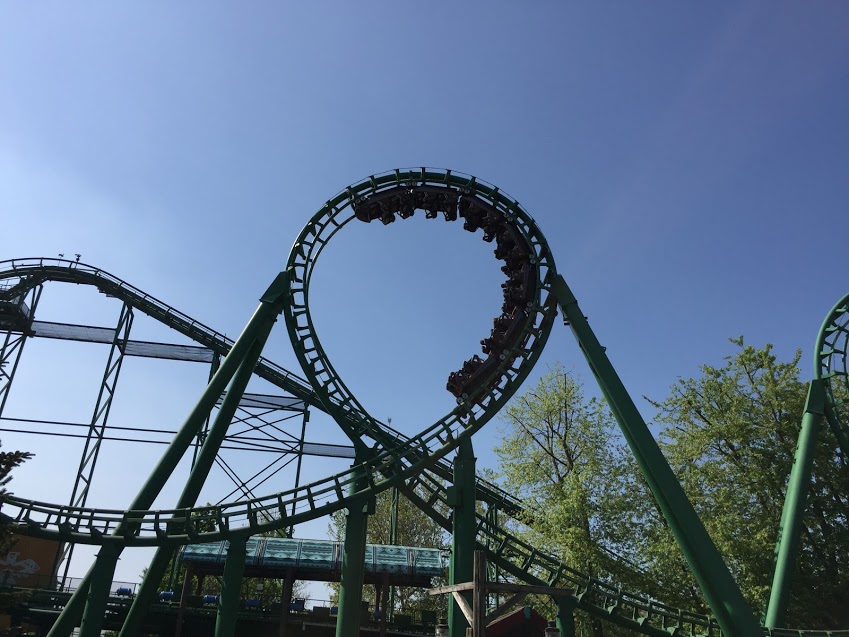 Thrill seekers will not want to miss the Shaman.  This coaster has 2 loops and some pretty high drops.

There’s also the Raptor, Oblivion Black Hole, and Blue Thunder roller coasters.  Believe me this park is not lacking in thrill rides! 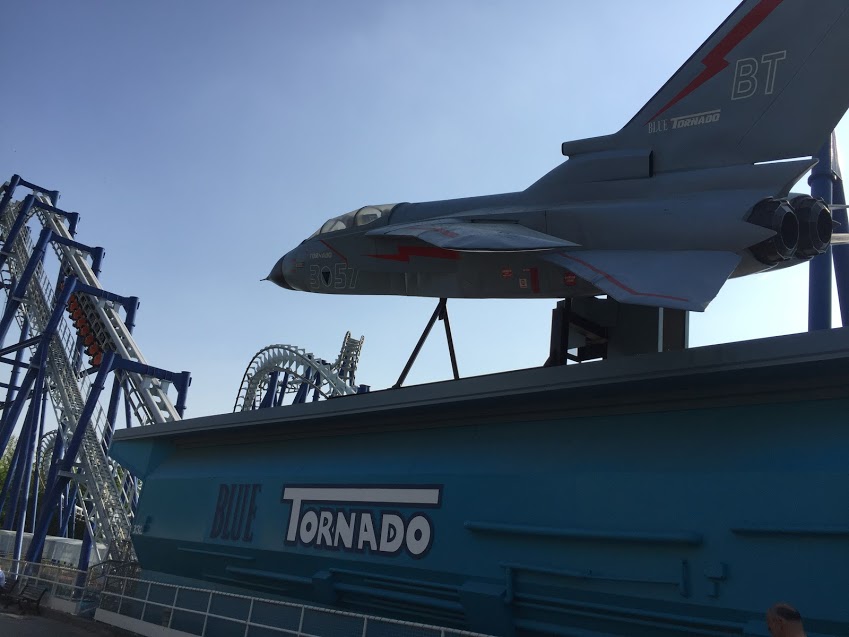 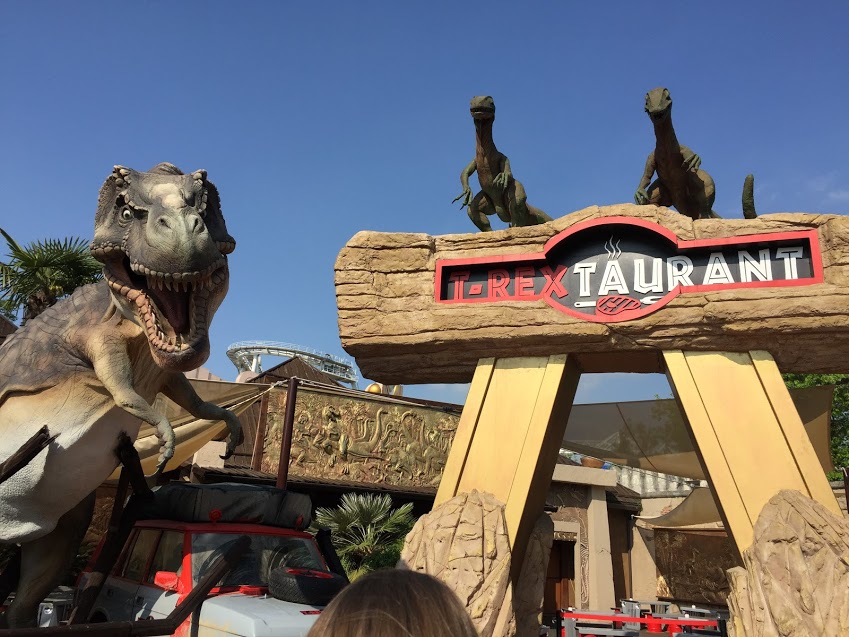 Part of the theme park experience is junk food!  You won’t be disappointed here!  You’ll find familiar favorites like burgers, hot dogs, pizza, as well as 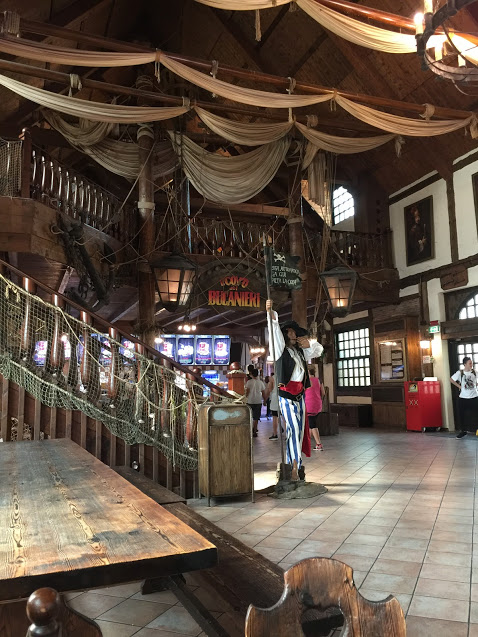 kebobs, shawarma, and crepes!  Healthier choices include salads and fruits.

You can dine with dinosaurs at the T-Rex, have tea at Aladin, burgers and dogs with the pirates at Bucanieri.

Now how much do you think all this fun costs, surprisingly it’s quite reasonably priced.  Specially if you compare it to the cost of other theme parks around the world.  Have you seen the admission price at Disney lately?  It’s over $100 a day per park! Ferrari World in Dubai cost a pretty penny as well, I think we paid about $75 each for admission a few years ago.

Well admission into Gardaland starts at €36 for one day if purchased online.  At the ticket counter that same ticket cost €40.50.  They also offer 2 day passes, season passes, and afternoon tickets (these are just about half price and allows you to enter only in the afternoon about 4 hours before closing.)   Season passes start at €49 for a basic Junior Pass and €50 for a basic Adult Pass.  For and extra €5 you get unlimited parking.  Season passes also give the pass holder certain benefits such as €5 admission to the Aquarium, and discounts at the restaurants and gift shops.

My daughter picked up season passes for her family, she’s already been back to Gardaland 3 times and the season’s still young!

So if you find yourself in the Veneto region, this includes Venice, and you and the kids need a break from all that culture (admit it, everyone needs a break from museums and churches), then head over to Gardaland.  You won’t regret it!