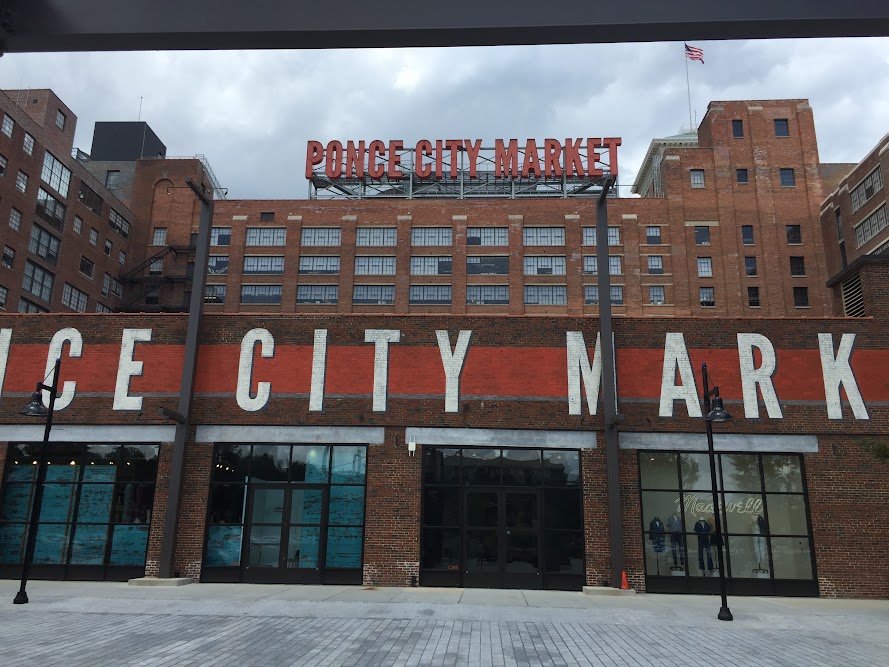 If you’re looking for a cool and hip place to spend a lazy Sunday in Atlanta head over to Ponce City Market.  The Food Hall and Park located within the complex are fun and amazing!

Ponce City Market located in an iconic stretch of Ponce De Leon Avenue in historic downtown Atlanta is a major part of the redevelopment movement of the city’s most established neighborhoods.  It’s a multi-use development that’s housed in the historic Sears, Roebuck & Co. Building.  The complex incorporates residential flats, offices, retail spaces, and eateries and has become a hub for the surrounding neighborhoods.  It’s incorporated a pedestrian network of green spaces and access to the Beltline corridor making it easy for residents and visitors to get around.

Last summer when we visited my daughter and her family in Atlanta we had the pleasure of spending Sunday at the Ponce City Market.  Actually we went there for lunch and ended up staying and playing at the Skyline, the roof top amusement center.

With all the great places to eat in and around Atlanta (trust me there’s plenty!) why you might ask did we decide to spend an hour or so to drive to the city (my daughter lives in the suburbs) for lunch.  The answer is simple, we couldn’t decide where and what to eat.  So my daughter suggested we head of to Ponce City Market’s Food Hall.  One could say we headed over to a food court, which we could have done at the nearby Mall of Georgia, but the Market’s Food Hall is no ordinary food court!

The Food Hall is quite a bit more upscale than your ordinary mall food court.  The restaurants boast award winning chefs that offer culinary delights made from local grown and caught (Georgia and Carolinas) ingredients.  It’s very similar to the Chelsea Market’s food hall in Manhattan.  In fact Chelsea Market’s owners are the developers of Ponce City Market!

You can find just about anything you’re craving at the Food Hall.  From handmade burgers and fries at H&F Burger, (they’re delish!)

To Kalbi beef buns (my grandson ate them all) from the Simply Seoul Kitchen,

and Middle Eastern plates from Marrakesh.  The chicken shawarma and falafels are amazing!

When you’re ready for dessert you can indulge at Honeysuckle Gelato or grab a ice pop at King of Pops Bar & Good Grubs.

Or you can have a cup of joe at The Dancing Goat Coffee Bar or a glass of wine or a cold draft at The Tap on Ponce!

So after lunch you can go shopping for yummy food to take home!

Now if you decide to dine at the Food Hall you basically have two options.

You can be seated at any of the restaurants and get table service like any other restaurant.  This only works if your party can agree on which restaurant to eat at!  Of course we couldn’t.  So on to option 2!

Every restaurant has a take out window so you can order and eat it in the seating area located on 2 levels.  Did I mention there were 2 levels to this food hall?  The main level gets pretty busy and it might be hard to find seating, specially if you’re a large party, which we were.  But never fear, there’s lots of seating on the upper level which you can access via an elevator or the stairs.  I don’t have to tell you where we ended up, there were 13 of us!

After lunch we wandered over to Skyline Park which is accessed by the Roof elevator.  You pay admission in front of the elevator, I think it was $10 per person for unlimited access.  Once you’ve paid admission you can ride the huge freight elevator to the park.

You’ll find a mini golf course, a big slide, and midway games in the park as well as a bar with outdoor seating.  You must purchase a game card if you want to play any of the games, and the bar has a drink menu you can order from.  Everything is ala carte, it’s not included in the admission you paid earlier.

But the most amazing thing about Skyline Park is the view of the Atlanta Skyline!

The day we stopped by Skyline Park the heat was unbearable.  So after the kids played a round of mini golf and all the midway games it was time for us to head home.

I have to say the unless you really find the need to play some midway games or mini golf, or really want to see the view, I’d skip the Skyline Park at this time.  There’s really not much to do to justify the $10 admission, in my opinion.  But to be fair there was lots of construction going on when we went, they are expanding the park so it may improve with time.

But the Food Hall is an absolute must if you’re in the area!