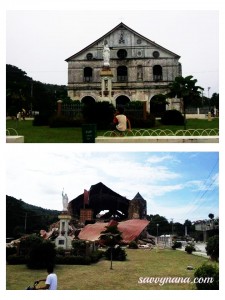 Loboc is located in Bohol, an island province in the Central Visayas region of the Philippines.  It’s 25 Km away from the provincial capital Tagbilaran City.  The municipality of Loboc is famous for the amazing Loboc River where you can take a lunch cruise along the scenic river.

Built by the Jesuits in the Baroque style and constructed of  coral stone Loboc Church was completed 1734.   Today it is also known  for the unusual symbols in the main altar that baffle history and conspiracy buffs.

March 21 to March 26, 2016 was Holy Week; the week before Easter Sunday.  It is a very important time in the Philippines.  Palm Sunday is the beginning of Holy Week.  On this day we commemorate our Lord’s triumphant entrance into Jerusalem where he was welcomed by worshiping crowds who laid down palm leaves in his path.

As a catholic we respect traditions of  Holy Week.  We abstain from meat until Easter Sunday;  old folks don’t comb their hair, take baths, and some don’t even eat  or drink anything but water.  This is done in respect for the sacrifices made by our savoir Jesus Christ who died in the cross to save our sins.

Filipino Catholics believe that  sacrifices in the name of Jesus is atonement for their sins and will absolve them from those sins .  In my province the best venue for sacrifices is  Cruz Daku or the Loboc Big Cross.  It’s hard to miss this cross that’s perched on top of a mountain in Loboc.  To reach the cross which is about 4 Km from the Loboc Church you must climb the mountain passing the other 13 Stations of the Cross along the way (the Cross is the 14th. and last station.   Awesome right? 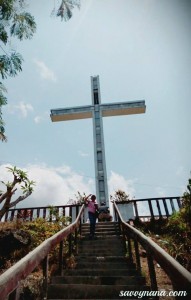 Cruz Daku or the Loboc Big Cross is a pilgrimage site.  As its name suggests it’s a big white cross that sits on top of the mountain.  The word Daku means big, and that cross is huge, approximately 80 feet tall.  There are 13 stations of the cross marked by smaller crosses  along the pilgrimage route; in the Catholic religion the Stations of the Cross are  14 paintings or carvings, each one depicting the successive incidents during Christ’s progression from condemnation by Pilate, to crucifixion and burial; prayers and devotions are done for each station.  During Holy Week many Boholanos do a pilgrimage walk to the site to make a wish.  They believe that if you climb the mountain and reach the cross, you say a prayer and make a wish and it will come true.

This is where the journey begins!!! 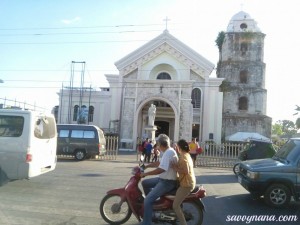 On March 24, Maundy Thursday  (the day of Last Supper)  we went to the Tagbilaran Cathedral Church.  We attended Mass and asked God to guide and protect us in our journey.  We asked for the strength and courage to face trials while we are on the road. 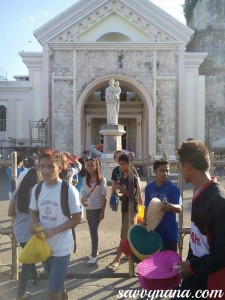 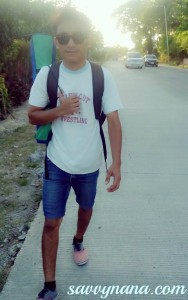 We started our journey around 4 p.m. (by the way you can start at any time or day during Holy Week or anytime of year.  You can drive a car or ride a bike from Tagbilaran Cathedral Church to Loboc Big Cross if you prefer. But for us we will walk as a sacrifice.) We go during Holy Week because of our religious beliefs and we choose to start on Maundy Thursday so we can arrive at the cross on Good Friday, the day it was said Jesus died to save our sins. We stayed at the station in vigil for the death of Jesus. You can stay or rest at any of the stations along the way or at the Cross.

So we started our long 29 km. walk from Tagbilaran Cathedral to Loboc Cruz Daku.  It’s super dusty, there’s lots of traffic, and it’s very hot.  You should wear  a cap or bring an umbrella.  You should  bring food for dinner and snacks and most importantly lots of water.  You’re gonna need it badly along the way!  If you didn’t pack food and water no worries; you can buy food and drinks along the way but it’s quite expensive.   To save money we brought our own.   Bring at least 14 candles too,  you will use them in every station of the cross. 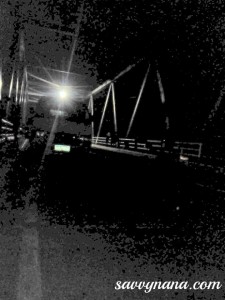 Anyway we walked 7 Km and around 7:00pm we stopped for dinner.  Then we continued our walk and reached Loay Bridge around 10:00pm. You can see  anchored floating restaurants down river. We stopped to rest for 30 minutes, mu shoulders, legs, and feet were in pain. The kids were tired and wanted  a nap  but we needed to  continue our journey.

So  started walking again, this time we walked slowly because our energy is waning.  I felt like sleeping but I walked carrying bags, tent and water.  We kept moving.

I suggest if you choose to walk, bring taser, or a knife, or something to protect yourself from bad people who stalk the route waiting for the opportunity to rob (or worse) pilgrims.  Never go alone, bring your friends and family so you have lots of company, there’s safety in numbers. 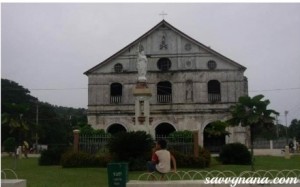 A little after midnight, its Good Friday already, we arrived at Loboc Church.  We put up our tents at the plaza in front of the church and rested for about an hour.  You can set up a tent and rest in the plaza, there are many people there doing just that.

Restrooms, one for men and another for women, are located across the street behind the bus station.  Bring tissues or toilet paper, handwipes or soap, most public restrooms in the Philippines are not equipped with anything.

At 1:30am we started the walk from Loboc Church to our final destination the Loboc Big Cross. But  before you take your first steps on the route cops who will inspect your bags.   They are  searching for weapons, illegal substances, and liquor.  These items are forbidden on the pilgrimage route.  After the inspection you can begin the climb to the Cross. 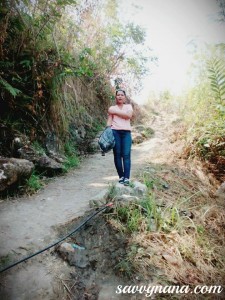 We had to get moving, we had to walk approximately 4 km to  reach the Cross. There are lots of people walking the same route, some are praying as they walk.  Some are silent and very serious but the rest are very noisy.   It’s a 1 1/2 km to  the first station, remember, there are 13 stations left and you have to save energy for the rest.  Anyway after the first station the next station is just 20-30 meters away.  But the mountain is very steep, it’s almost vertical and  you have to climb carefully to reach the  other stations. 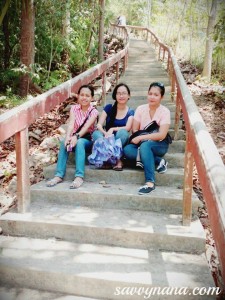 After  climbing 150 -200 steps and stopping at 13 stations we arrived at the Big Cross. 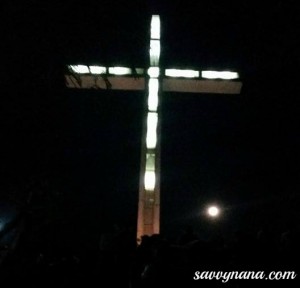 We were all exhausted but we felt good.   We prayed and made a wish. We rested for awhile then headed back down.  At the top there are what they called HABAL HABAL DRIVERS ,  drivers with motorcycles that will give you  a ride down if you pay P40.oo per person.

I felt like I was in heaven when I reached the top!   It’s pretty amazing. The view is amazing and the journey well worth it!