A Great Afternoon at Zoo Atlanta!

Last month I visited my daughter and her family in Georgia.  They live in Dacula, one of Atlanta’s many suburbs.  I’d never been to Atlanta before and was excited to explore the city and it’s sights with my family.  One of our favorite places to visit where ever we go are zoos.  We love zoos and have visited many all over the world.  So an afternoon at Zoo Atlanta was definitely on our agenda.

We were very excited about our planned visit to Zoo Atlanta, it’s one of the only 4 zoos in the United States that is home to Giant Pandas!  We all wanted to see the pandas! 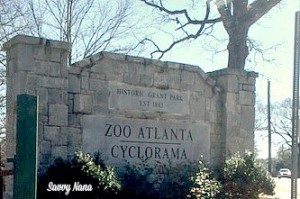 My daughter agreed to take the boys out of school early on the last Friday of January, and we set out for a fun afternoon at Zoo Atlanta.  It’s about an hour or so drive from her home, depending on traffic.  It seemed like we picked a good time to go, traffic was light and we arrived downtown in very good time.  Zoo Atlanta is located minutes away from downtown Atlanta in historic Grant Park.

The drive to the zoo entrance takes you pass streets of stately homes reminiscent of years past.  It was lovely! 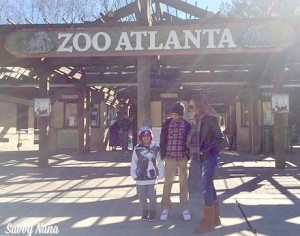 The ticket booth is located across from the original Atlanta Cyclorama & Civil War Museum, we didn’t get to visit this time as it’s being relocated and restored.

Check their website for their many special offers and discounts.  Zoo admission is also included in the Atlanta City Pass. (Affiliate Link)

You can pick up a zoo map and schedule of events at the ticket booth to help you navigate the exhibits and plan your day.  There are many activities going on including animal feedings, zoo keeper talks, and animal encounters.  Some some activities require the purchase of  special tickets, please check their website for more information. 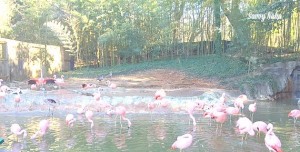 Once we entered the zoo we found ourselves in Flamingo Plaza and were delighted with the sight of pretty pink Flamingos hanging out in the lake.

The Plaza is where you’ll find Flamingo Joe’s for snacks, restrooms, and the main gift shop called the Trading Posts.  There are also some fun things in the Plaza such as a photo booth and wind machine.  We decided to save all this for later and headed into the heart of the zoo. 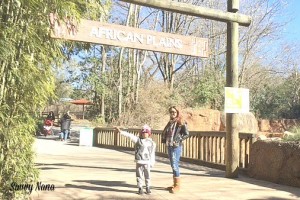 Taking the left path from Flamingo Plaza we entered the Africa Plains area.  The entrance is right by the elephants, unfortunately there were none out and about that day, but never fear, the rest of the exhibit was awesome! 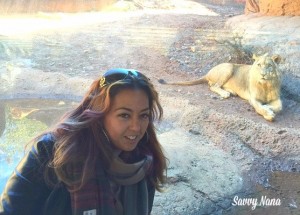 We headed straight for the Lions and were greeted by  playful roars by the 3 lions that were just hanging out in their enclosure.  We were lucky enough to run into a family who are zoo members.  They told us all about the lions!  From what they said the 3 lions we were seeing were born in Zoo Atlanta and were just about a year old.

One of the lion cubs, I guess their more teenagers than cubs, settled down right by the glass and posed for us.  We got lots of cool pictures with him! 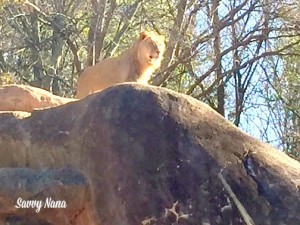 We also got great lion views on the other side of the exhibit where we could look into the lion enclosure.  They really are magnificent!

Across from the lions were giraffes, zebras, rhinos and more.  After having our fill of the lions we sadly bade them farewell and headed over to the viewing platform to have a look at the giraffes and their friends.

Here we were again fortunate to see a couple of keepers feeding the giraffes.  We got an awesome view of the giraffes milling around the feeding area.  The zebras were running around too, but the rhino hung out in his own area. 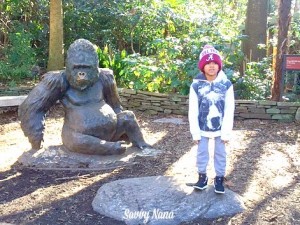 After watching the giraffes and zebras the kids decided to skip the Reptile & Amphibian exhibits and head straight to The Ford African Rain Forest to check out the gorillas.

We enjoyed viewing the gorillas from indoor viewing area then headed over to the Gorilla deck. 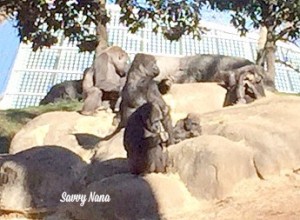 The deck overlooks pretty much all the gorilla habitats and we were fortunate enough to see a group of gorillas with with their young.  They were delightful! 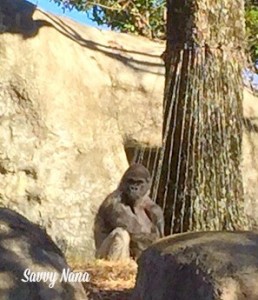 We also saw the Ozzie, at least we thought is was him in his own habitat.  Ozzie is the oldest silverback gorilla in the world!  In fact my daughter and grandsons remarked that Ozzie and I were born in the same year!

After the gorillas we walked thru The Living Treehouse and saw the lemurs.  We didn’t stay long as there were birds flying around and my grandson Devon wasn’t very happy, he’s not a bird fan, neither is my daughter. 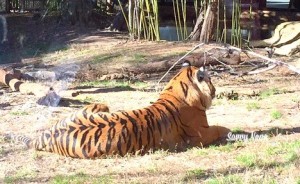 We wandered into the  Sun Bear & Tiger terrace and saw the sun bear wandering around the enclosure, the tiger was no where to be seen.  We did hear him roar, so we followed the path down a bit and found the tiger pacing by the bamboo like fence.  He did not seem pleased to see visitors!   But we were delighted to hear him roar and see him pacing.  He did settle down after a few minutes and we were able to see him laying in the sun when we made our way back up to the viewing area.  He is beautiful! 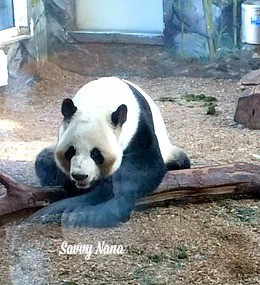 From there the boys wanted to head straight for the Giant Pandas, they were so excited to see them that they decided to skip the Orangutans.  Did I mention that there are only 4 US zoos that house Giant Pandas?  The 4 are the National Zoo in Washington, D.C., the San Diego Zoo in California, the Memphis Zoo in Tennessee, and Zoo Atlanta.  After this visit to Zoo Atlanta we’ve been fortunate enough to see them in 3 US zoos. 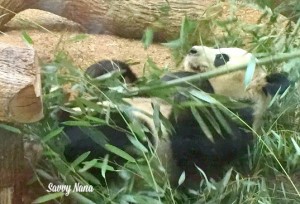 The pandas were playful that day!  They amused us with their antics; they tumbled around and played with their ball before turning over and munching on bamboo.  I can’t honestly tell you who had more fun, us or the pandas!

Across the Giant Panda viewing area is Pandamonium, the gift shop dedicated to all things panda.  We wandered in to see what souvenirs they had to offer, there were plenty.  The the boys couldn’t decide what they wanted and opted to wait until we returned to Flamingo Plaza and visit the gift shop located there.  I think they were hungry and wanted a snack before making major decisions; they were trying to decide between buying the boomerang or the baseball! 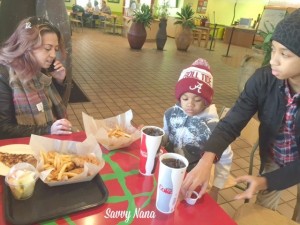 By now it really was time for a snack, and we found ourselves in the perfect place for one.  The Wild Planet Cafe is located right by the Giant Panda area.  The cafe has a nice menu at very reasonable prices.  We had chicken strips, pizza, fries, fruit cup, and drinks.  The service was fast and friendly, and the food was pretty good.

After our snack we ended up at the Kid Zone where we saw the train go by as we wandered around the area to see the Kangaroos and other animals.  The petting zoo is also in this area, but the boys were ready for the gift shop and didn’t want to go in.  So we made our way back to Flamingo Plaza where the boys found the wind machine.  Dion just had to go in!  We also took crazy photos in the photo booth before going into the Trading Company. 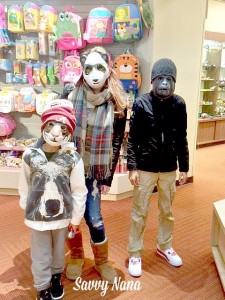 The gift shop was lots of fun.  This one was much bigger than Pandamonium and had lots of cool stuff for sale.

Devon really wanted a tiger mask, he buys a mask every time we visit a zoo, he has a collection of them.  Jenny and the boys had a great time trying on different masks. 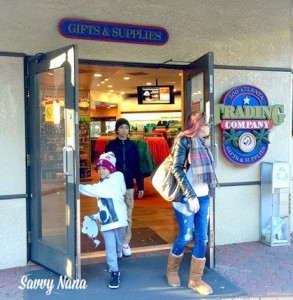 Along with the mask we ended up picking up several more souvenirs and some candy.

By now it was time to go home.  It was a great afternoon at Zoo Atlanta.  I’m not sure which exhibit was our favorite, it’s hard to decide!  But I do know that we’ll be back next time I’m in town to see the animals that we missed this time.

Thanks Rachel Davis, Zoo Atlanta’s Director of Communications, for the complimentary admission tickets.  We had a blast!  Your zoo is terrific!

Here’s a short video of our visit to Zoo Atlanta, enjoy!