5 Unique Ways to Experience the Philippines

The Philippines in an archipelago of 7,600+ (and counting) islands that sprawls across Southeast Asia.  It is defined by it’s crystal clear oceans, emerald green rice paddies, simmering volcanoes, diverse cultures, loud jeepneys, modern cities, depressing slums, throngs of people, and never ending traffic.  This is why there are many unique ways to experience the Philippines. 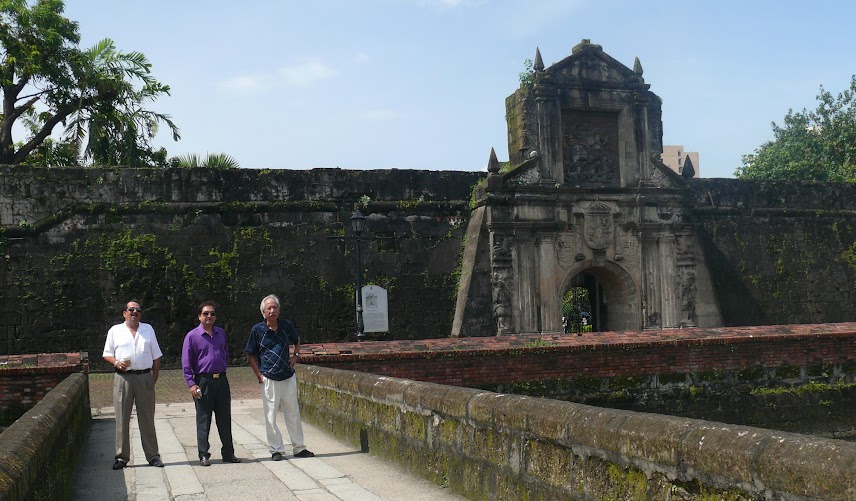 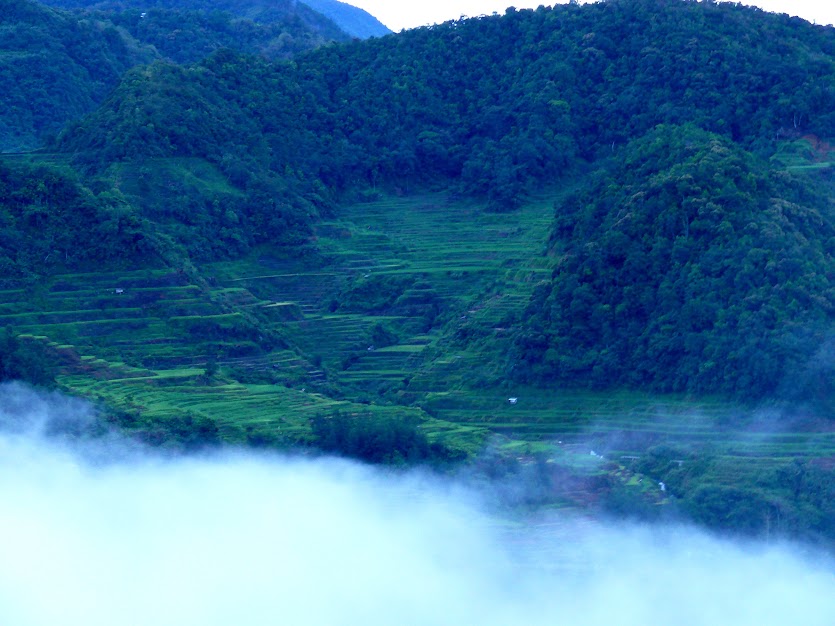 If you’re looking for nature and adventure the Philippines has plenty of that too!  Ecotourism has gained popularity in the Philippines and tourists are welcome to explore and observe pristine oceans, mountains, and unique flora and fauna.

If you’re a sun worshipper and just want to kick back on the beach or at a luxury resort the Philippines has plenty of that as well.  The country is chock full of lovely beaches and luxury hotels staffed with folks who will cater to just about every whim or desire.

There are many ways to experience the Philippines.   From its diverse cuisine, historical sites, natural wonders, sun kissed beaches, and bustling city life, the Philippines has it all.  Most folks hang out in the large cities particularly Manila the capital and its surrounding towns and villages.  But if you want to really experience the Philippines and all that this pearl of the Pacific has to offer here are 5 unique activities that will let you do just that! 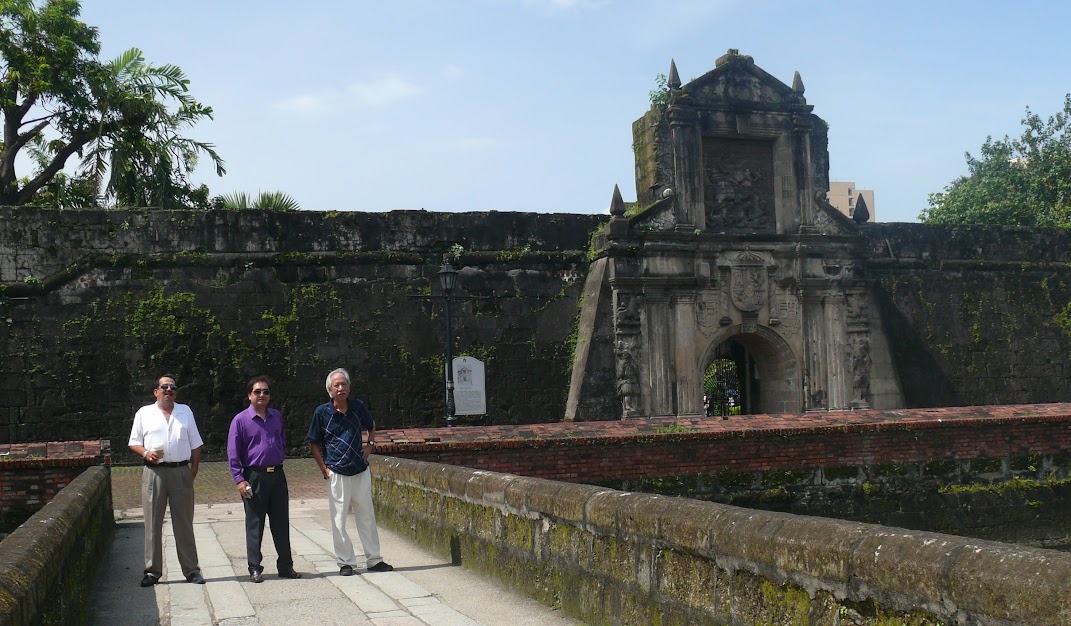 This is a must for all history buffs.  Intramuros, literally meaning between the walls, is the historic center of the capital city of Manila.  It is also the oldest city in the country dating back to 1571 when the city’s foundations were laid by the Spanish conquistador Miguel López de Legazpi.  The city remained under Spanish rule until 1898 when America gained control of the country after defeating the Spanish Armada at the end of the Spanish American War. 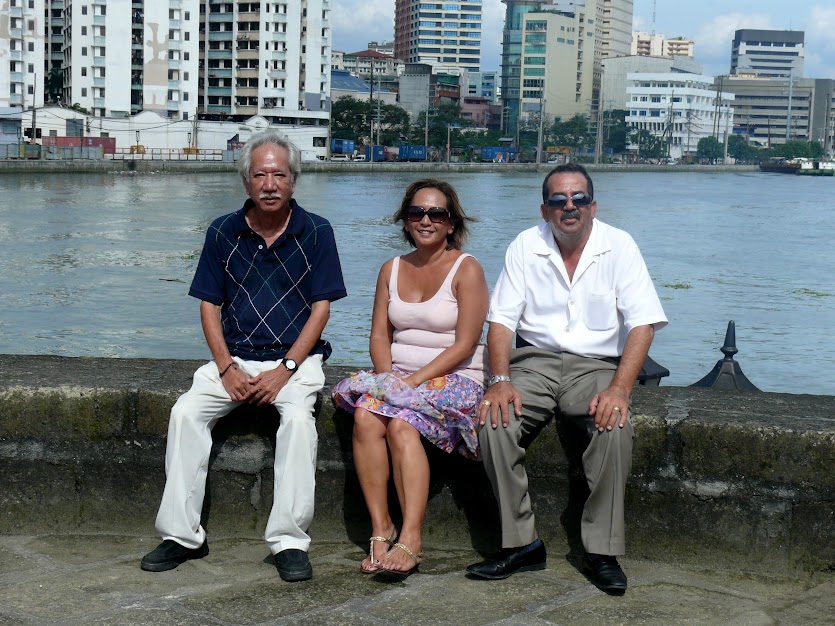 The city and the nearly three mile long stone wall that surrounds it have stood its ground through wars and natural disasters.  The city is bordered by the Pasig River on one side and Rizal Park on the opposite side. During colonial times Intramuros was center of religious, political, and educational life in the country; by all respects Intramuros was Manila.  It was almost completely razed when the occupying Japanese forces staged their last stand there against Allied and Geurilla Forces.

Today it is  a mish mash of reconstructed historic buildings, museums, restaurants and modern buildings.  Within its walls you’ll find San Augustin Church completed in 1607 is the country’s oldest church and a UNESCO World Heritage Site.  You’ll also find the Minor Basilica and Metropolitan Cathedral of the Immaculate Concepcion aka Manila Cathedral.  Destroyed during the Battle of Manila in 1945 during WWII the Cathedral was reconstructed in 1958.  It serves as the seat of the Archbishop of Manila.

You’ll also find Fort Santiago within its walls.  This served as the military headquarters of the Spanish colonial government.  Although heavily damaged during the Battle of Manila some of the forts key features have been restored including the gate with the wooden relief featuring Santiago Matamoros (slayer of Moors) the patron saint of Spain.  The fort’s barracks is home to the Rizal Shrine a small museum dedicated to the life and works of José Rizal, the national hero who was imprisoned there before his execution in nearby Rizal park on December 30, 1896. 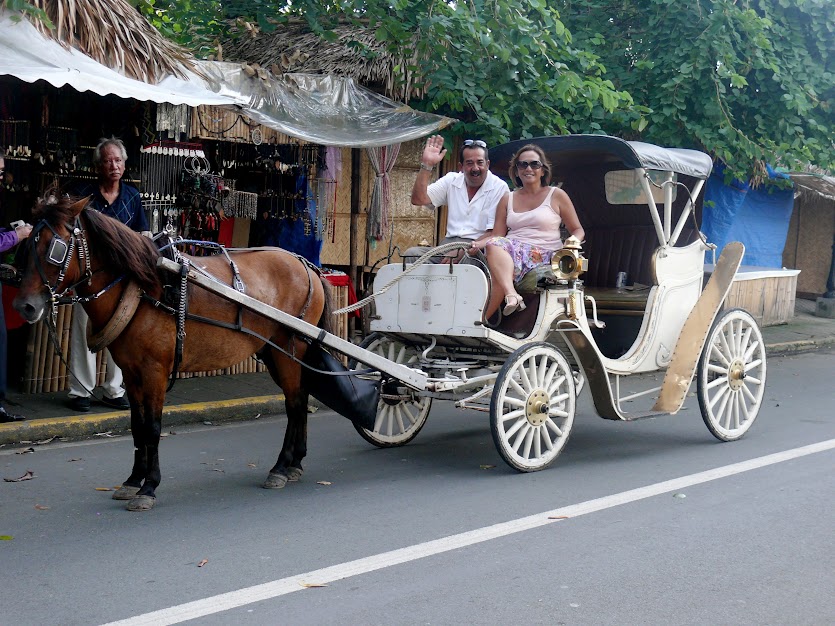 There are other museums and wall gates in Intramuros and to get around you might want to hire a calesa instead of walking the confusing roads.

These horse drawn carriages were first used on Manila streets in the 18th. century. They’re a nice way to get around the historic city.  You can find them waiting outside Fort Santiago, each calesa comes with a guide (who hangs off the side of the carriage) and driver.  It’s a good idea to discuss price, route, and ride length before hopping in.  Oh and stay within the city walls no matter how much the guide tries to persuade you to take a tour around Rizal Park and over the bridge to Quiapo the bustling open market.  Trust me, we agreed and found ourselves dodging jeepneys, cars, and buses in heavy traffic. 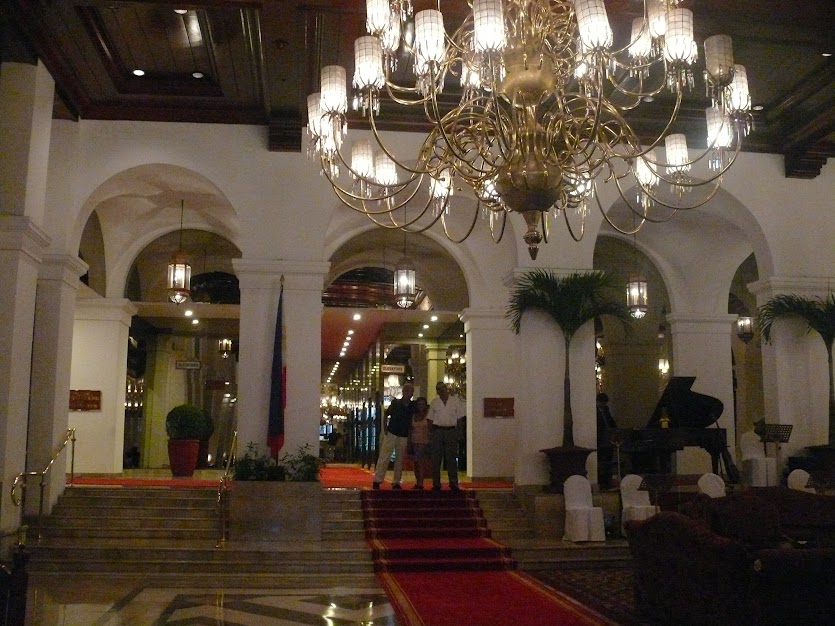 After you’ve had your fill of Intramuros stop by the iconic Manila Hotel.  It’s located about half a mile away in Ermita.  This historic 5 star luxury hotel opened its doors in 1912.  General Douglas McArthur and his family made their home in the Manila Hotel during his tenure as military advisor to the Commonwealth between 1935-1941.  Today his penthouse apartment has been refurbished as the lavish McArthur suite.  Stop by for a drink at the Lobby Bar or an afternoon snack at the Cafe Ilang Ilang; the mango crepes are to die for!

By the way if all you want to do is laze out on a lounger by the pool the Manila Hotel is a fine  place to do so! 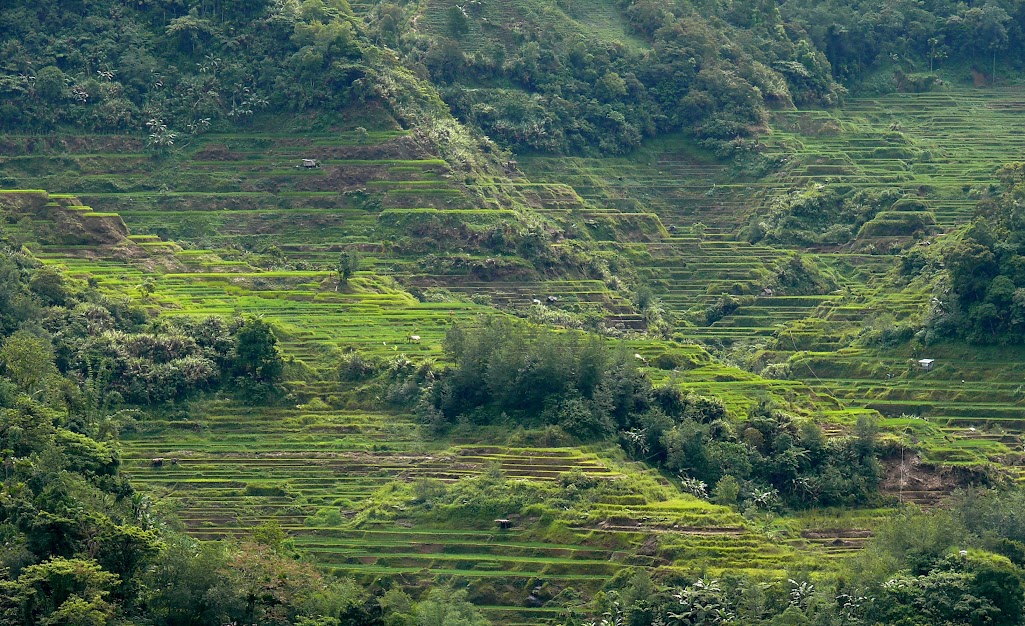 Collectively known as the Banaue Rice Terraces these rice paddies were hand carved into the mountains of central Luzon the main island of the Philippine archipelago.

The terraces are spread between several villages in the Cordillera region.  They are a system of irrigated fields made of mud and stone hand carved in the mountains over 2000 years ago by the indigenous people called the Ifugao.  Contrary to popular belief not all the rice terraces are UNESCO Heritage sites.  In fact just 5 of these rice terraces hold the honor and most of them aren’t easily accessible.

Regardless which cluster of terraces you decide to visit you will be in for a truly awesome experience.  Getting there can be an adventure in itself, it’s at least an 8 hour drive from Manila, more if you hit lots of traffic, run into mudslides, or just flat out get lost.  But believe me it’s worth the trouble! 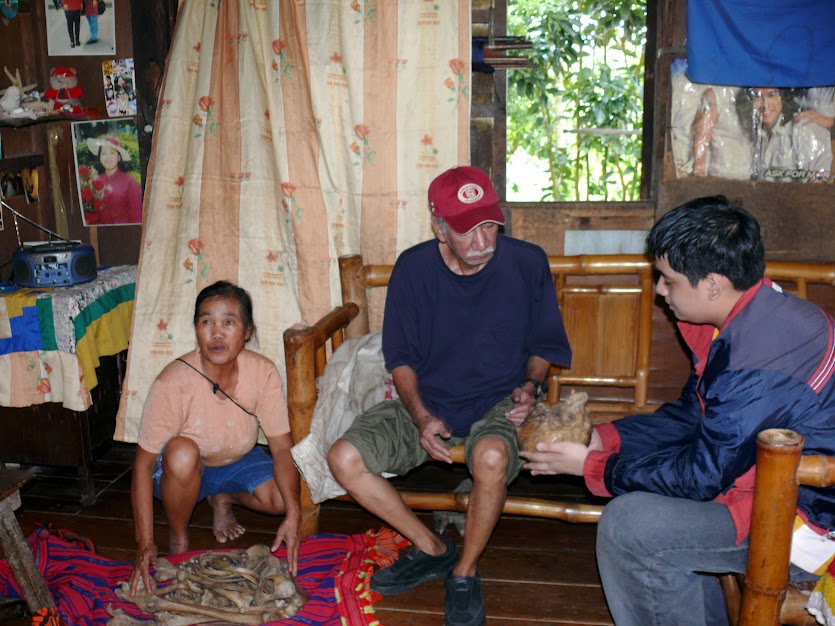 Once there you can hike into the rice fields and explore, visit some area museums, and my favorite part talk to the delightful native inhabitants in the Tam-An village or any other village within the terraces.  They are so friendly and for a fee, they will show you their ancestors bones and tell you about their age old burial customs; guide you thru the fields; dress you in traditional gear; and let you crawl around their huts (actually they don’t charge for that activity). 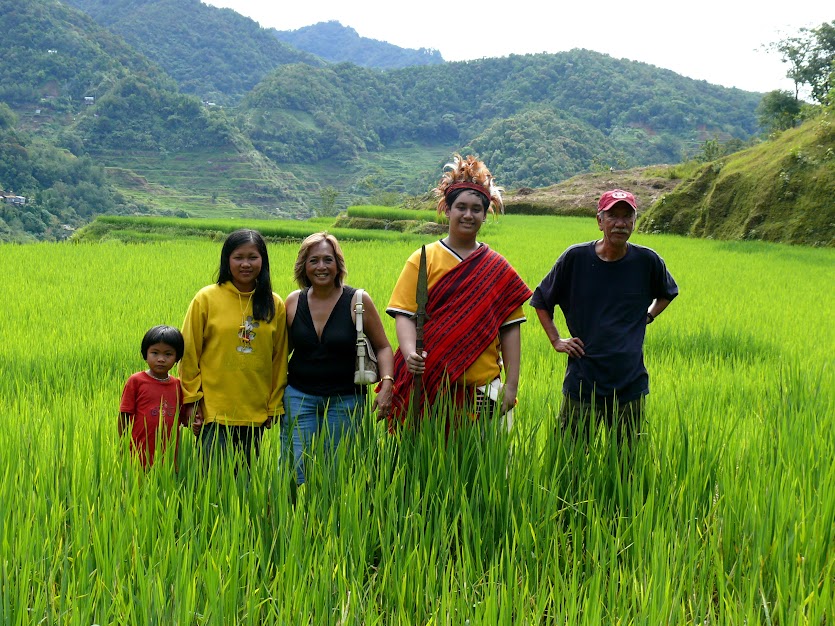 The fees are 100 PHP per activity that’s just a bit over $2.  It’s so worth it if only for the pictures! 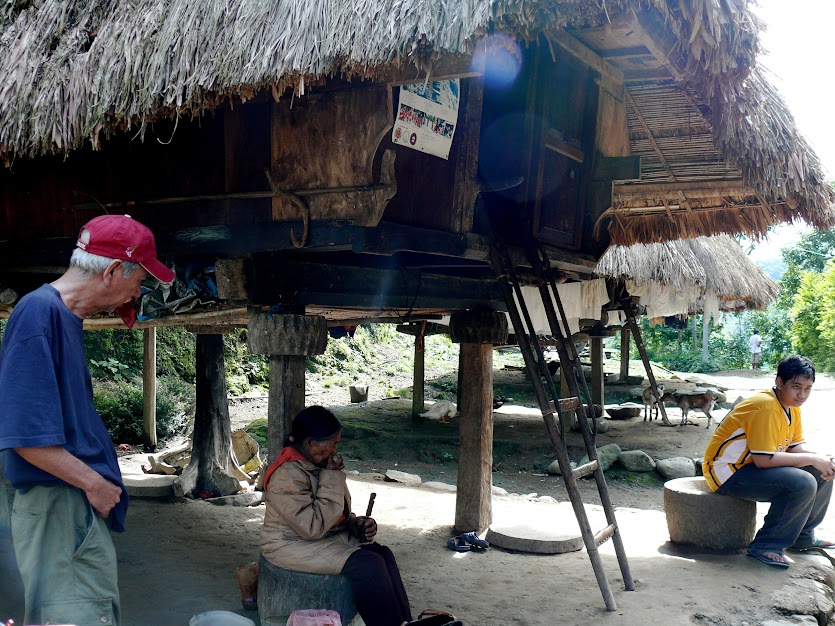 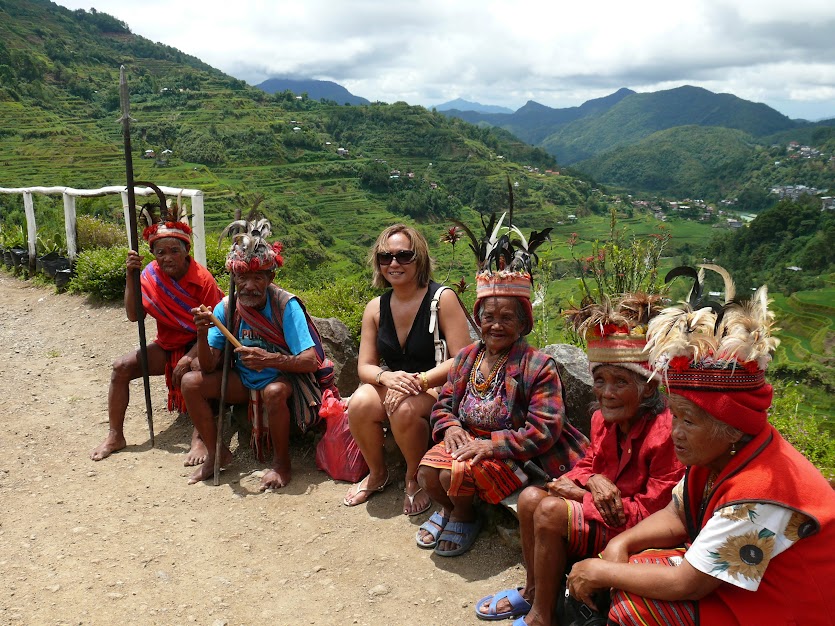 If hiking up and down the slippery paths isn’t your cup of tea you can still enjoy the magnificent views at the viewpoint and chat with the elders.  They’re happy to tell you stories and answer any questions you might have.

For more about our trip to Banaue click here! 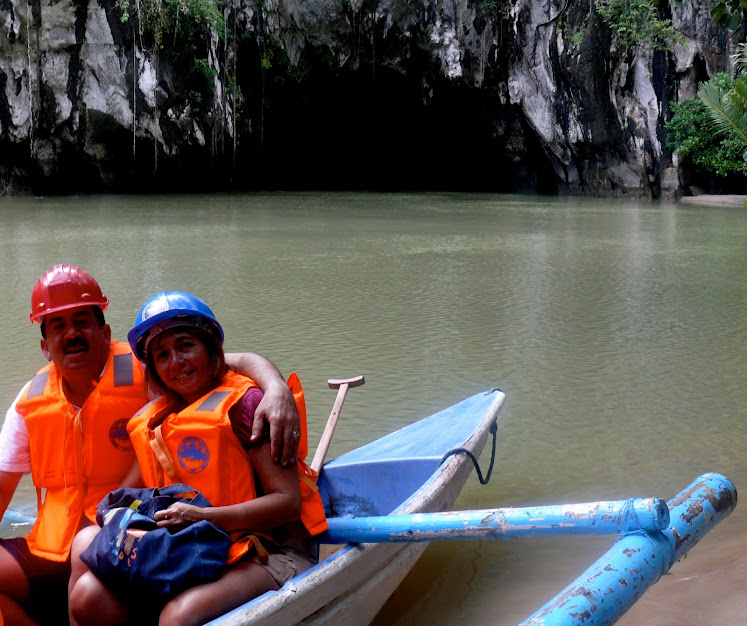 The island province of Palawan consists of 1780 islands that stretch between the South China and Sulu Seas.  Its provincial capital is Puerto Princessa and his home to the best beaches and reef diving in the Philippines.  Tubbataha Reef National Marine Park and the Puerto Princesa Subterranean River, both UNESCO World Heritage Sites are located there.

Puerto Princessa is arguably the cleanest city in the country where the citizens are invested in keeping their province not only clean but ecofriendly. 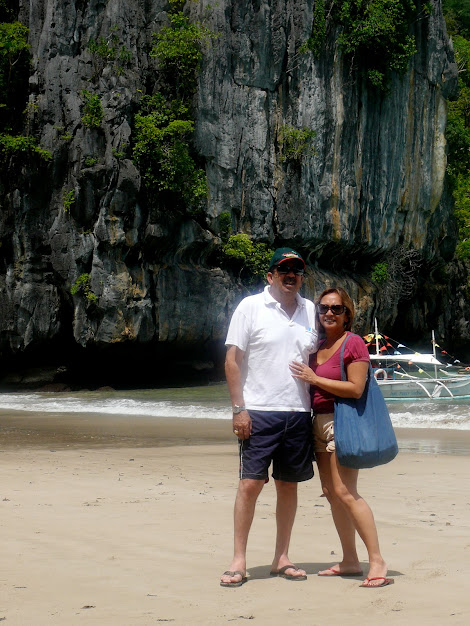 The local government and the citizens are deeply invested in preserving their region’s natural beauty and resources; they consistently act as good stewards of the land making sure that tourists don’t litter nor pillage the reefs and take home souvenirs of coral, shells, or fish.  A delight in a country where it seems anything can be had for a price, even if it leads to extinction.

There are many things to do in Palawan, but diving is a big part of the lure.  Since I’m not a diver my favorite activities are sightseeing and eating.  For this I head to the Subterranean Cave in Sabang and hire a local banca (boat) to take me island hopping. 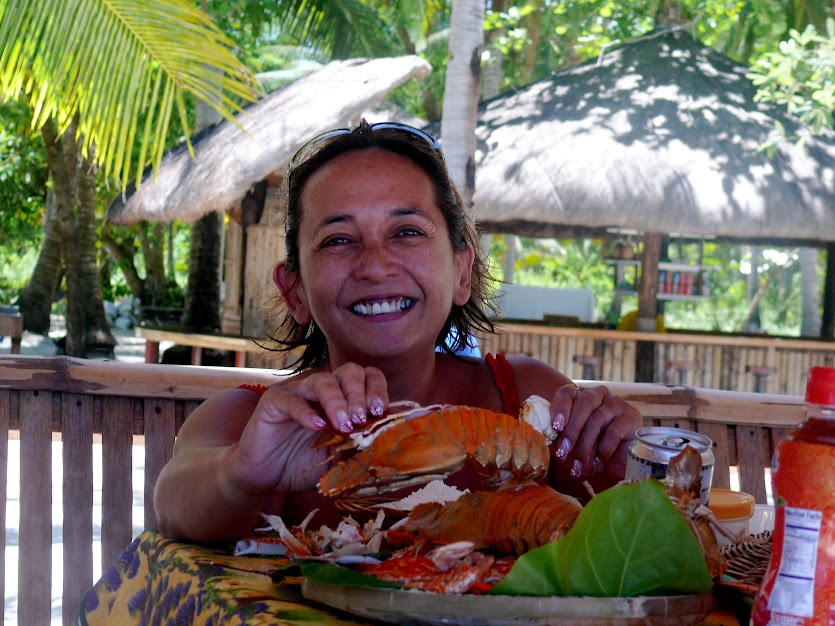 The island hopping takes care of some of the eating too!

On Pandan Island which would be called an organized beach in Europe one finds shady huts and picnic tables and people who will sell you their daily catch of crab and rock lobsters!   They will cook it and deliver it to your table at lunch time along with steamed rice, dipping sauces, and bottles of San Miguel beer.  What more can you want?

For more on our trip to Palawan click here! 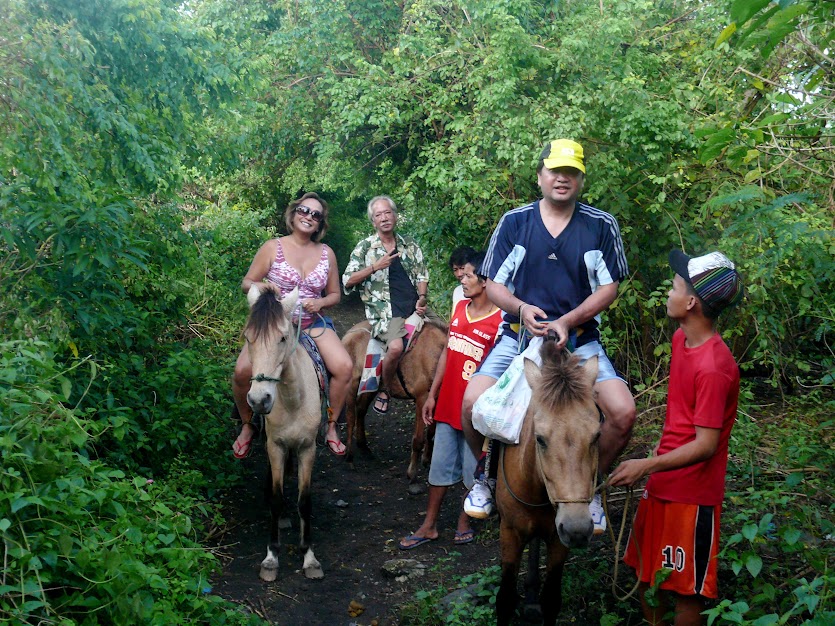 Taal Volcano located about 2 1/2 hours by car from Manila is the worlds smallest active volcano yet is one of the deadliest.  It has had 33 major eruptions since 1572. 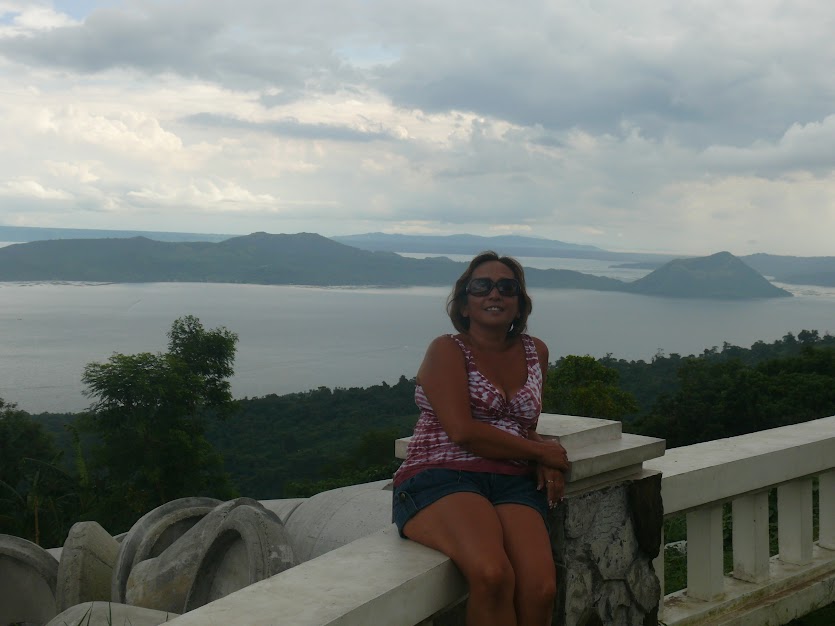 Most folks just drive out to the view points and have a look at the volcano.  It’s pretty amazing!

But for the adventurous or insane, I’m not entirely sure which group I belong to, a hike or horseback ride into the active volcano is a must. ( In my opinion it’s sort of like the road to Hana trip on Maui, you do it once and never again.)

Seriously going into the volcano itself is amazing.  You get to see the little island in 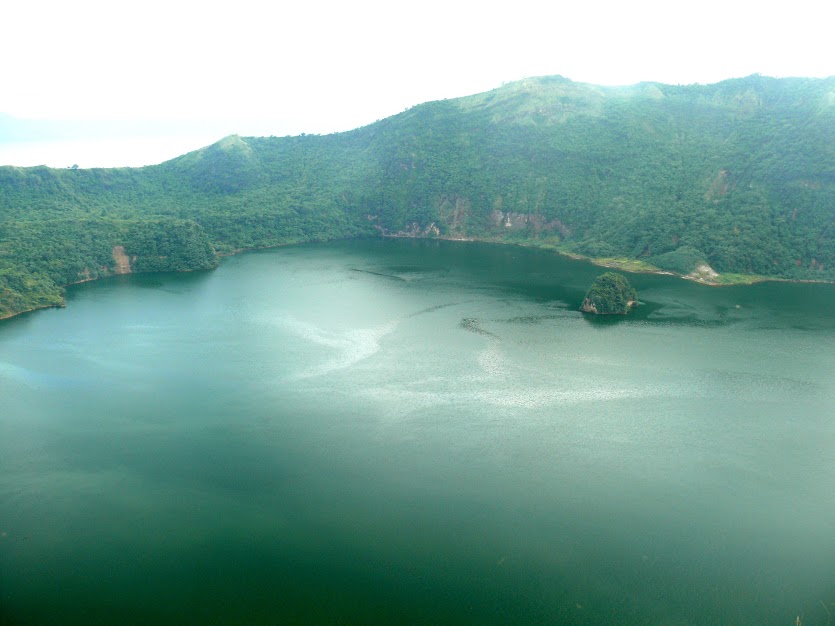 the lake filled with sulphurous water.  I would stop at admiring the view and not look for ways to swim in that water, the way down looks quite daunting and the water not that inviting.  You’ll pass smoking fumaroles along the way a definite reminder that you’re wandering around an active volcano. 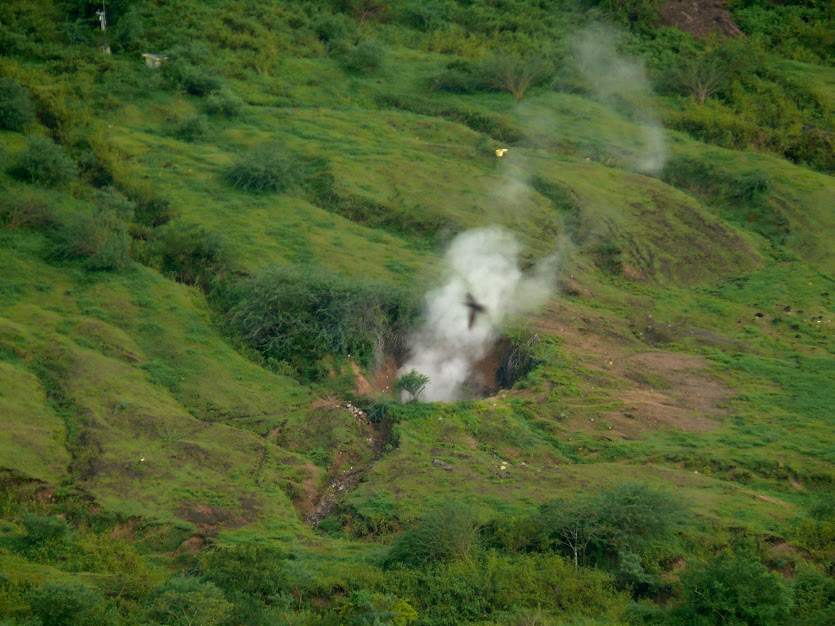 I have to say this trip is not for the faint of heart, but for those who dare, with a bit of caution, like check the threat level before you head out, the trip is definitely unforgettable.

For more on our trip to Taal Volcano click here! 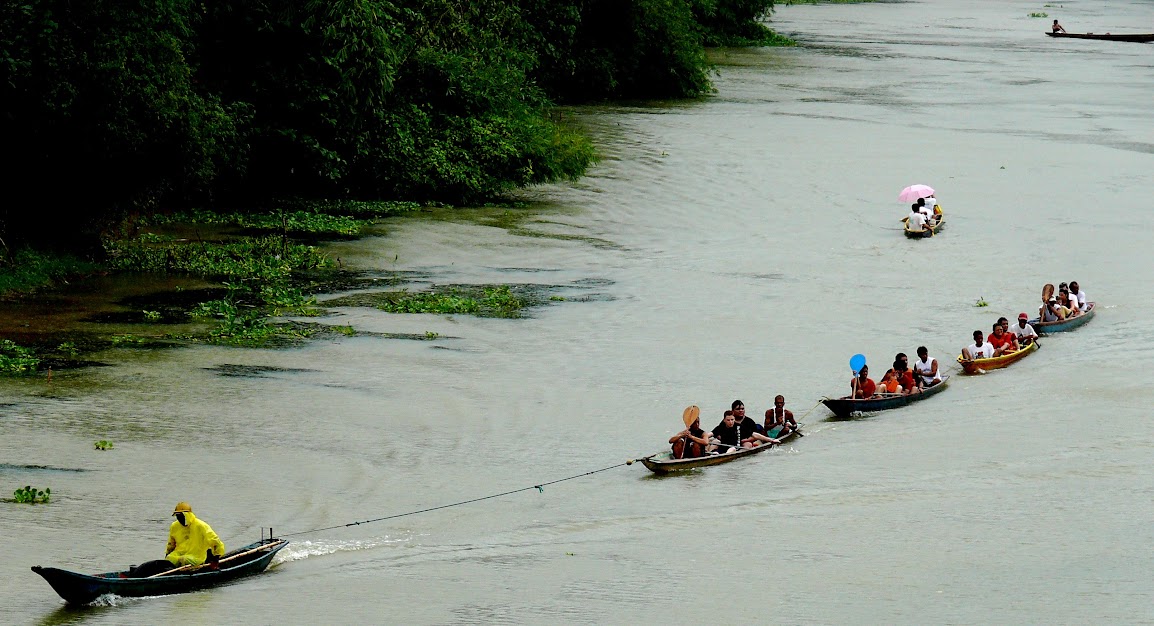 Also known as Cavinti Falls or by it’s native name Magdapio Falls Pagsanjan Falls is one of the most famous water falls in the country.

Located at the boundary of Cavinti and Pagsanjan towns in the province of Laguna the falls and the surrounding area was proclaimed a national park in 1939.  It was here that director Francis Ford Coppola filmed the last scene of his Vietnam War epic movie Apocalypse Now.

There are actually 2 falls within this gorge.  Bankeros or boatmen paddle, push, pull, and sometimes carry tourists in boats thru the 14 rapids that lead up to the falls on the Magdapio River.  Once you reach the main falls you can board a raft for a behind the scenes look at the waterfall and explore the Devil’s Cave located behind the falls.  The raft ride is of course charged a separate fee.

Shooting the rapids is fun!