Jordan I have to admit is one of my favorite countries. I love the history (it’s ancient), the culture, the sites, the people, and the food; especially the food!

Jordan is a modern country that sits on ancient land.  Civilization in Jordan pre-dates biblical times.  It  has been home to ancient people since the  Neolithic Period over 12,000 years ago.

In fact some of the first artwork made by humans were discovered in Ayn Ghazal archaeological site in what is now Amman the modern city that is the  country’s capital.  In total 15 pottery statues were unearthed at the site and they are now displayed at the new Jordan Museum in Amman.

The museum is also home to some of the Dead Sea Scrolls including one of the famous copper scrolls.  The Jordan Museum should be on your list of places to visit in Jordan regardless if you’re a history buff or not.  The statues are amazing and the scrolls are definitely intriguing.

But to really experience Jordan step away from the museums and the hustle and bustle of the busy capital and visit some famous and not so famous sites around the country.  Here are 5 unique activities that will make your Jordan vacation truly memorable.

The ancient Rose City of Petra located in southwest Jordan is arguably one of the most important archaeological sites on earth.  In my opinion it ranks up there with the Pyramids of Giza in Egypt, the Pyramids of Chichen Itza in Mexico, and the UK’s henges.

The city is located in Wadi Musa, the Valley of Moses where according to the holy books Moses struck one of the stones in the desert valley and found water. Nestled between desert canyons and mountains Petra was the thriving trading center and capital of the Nabataean empire between 400 BC and AD 106.  The ancient buildings with elaborate facades were carved out of the sandstone cliffs in the second century AD.

I believe that a trip to Jordan is incomplete if one doesn’t visit the city of Petra.  A trek through Petra is a humbling and awe inspiring experience.  There are many ways to see Petra, the site is huge even though just 15% of the city has been excavated.

I prefer to walk in from the main gates.  To reach the city one must meander thru the twisting canyon called the Siq.  Walking is the best way to see all the features of the Siq including the system of ledges that brought water into the city in ancient times.  You’ll also see some carved mini “temples” and staircases scattered through out the Siq; you never really know what lies beyond the curve until you get there!

It’s also the best way to get your first glimpse of the city, believe me it’s breathtaking!  The narrow Siq opens  up to allow you to set foot in the ancient city and the first sight you will see is the iconic building made famous by the movie Indian Jones and the Last Crusade.  Stepping into the sunshine from the shadows of the Siq is a magical moment!

You can wander the city on foot then catch a donkey  up to the monastery located up a steep path towards the end of the site.

Or if you prefer you can hire a camel to walk you around the city.  On your way out if you’re too tired to walk back to the main gate you and hire a carriage to take you back.

How ever you decide to visit this UNESCO World Heritage Site it is definitely worth the time.  For more information on things to see in Petra click  here! 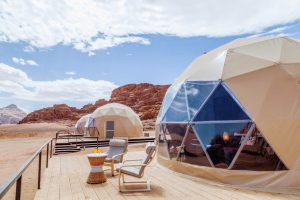 Wadi Rum is a desert valley in south Jordan known for its spectacular sunsets and topographical formations.

A ride through Wadi Rum is like a voyage through Earth’s topographic evolution.  Many of the formations are older than the Dead Sea Rift which forms the western part of Jordan.

Wadi Rum is a desolate inhospitable place that the local Bedouins have camped in and traveled through  for centuries.  Today Wadi Rum is a protected area where visitors can participate in a variety of activities.

One of the most popular things to do is to stay overnight in a luxurious tent.  A far cry from the tents used by ancient bedouins these modern tents are air conditioned, have running water, and are very comfortable.  Many of the tent resorts or hotels are located deep enough within the preserve that you get a feeling of the isolation.  If you’ve never experienced the saying “as black as night” this is one of the places to do so.  The darkness that surrounds you makes it the perfect place to stargaze for those are the only points of light you’ll mostly see.

You can go trekking on camels, by horseback, or by 4×4 vehicles.  You can even hike, but bring a guide and lots of water if you do.  Or for a very special activity go on a balloon ride at sunrise or sunset.  Spectacular! 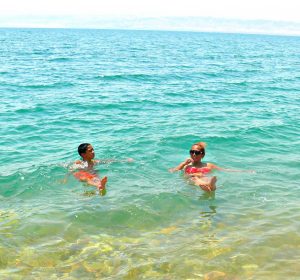 Take a Dip in the Dead Sea

The Dead Sea has the lowest elevation and the lowest body of water on the surface of the Earth. Its surface level is over 1400 feet below sea level.

The Dead Sea is actually a landlocked lake located between Israel and Jordan.  Its main source of water other than rain is the Jordan River although there are small tributaries and underground springs which trickle into the lake. But the Dead Sea is the terminus for the flow, in short there is now way out.  So the water accumulated in the lake evaporates and creates salt.

It is famous for it’s healing waters which are said to cure everything from skin disorders to diabetes.  The benefits of the waters are attributed to the high concentration of salts that have accumulated in the lake over centuries.

Because of the extremely high salinity pretty much everything is buoyant in the Dead Sea. So even if you don’t know how to swim you will float, but be aware that even though you float it doesn’t mean you can’t drown.  In fact floating on your stomach is not a great idea, because the water is so buoyant turning and swimming is difficult; so you could get stuck on your stomach and drown!

But with some common sense and caution a dip in the Dead Sea is a must do when in Jordan!

Umm Quais is both a modern town and ancient city in Northern Jordan.  Known as Gadara in ancient times it was a member of the Decapolis, a group of 10 city/states, that marked the eastern frontier of the Roman Empire.

It was also occupied by the Byzantines and later the Umayyad Dynasty so you’ll find ruins of those ancient civilizations as well.

What makes this town and site unique is it’s location.  Snuggled amid the Golan Heights of Syria, the Jordan Valley of Jordan and the West Bank, and Lake Tiberia (The Sea of Galilee) in Israel Umm Quais quite literally has a view of 3 countries, or 4 on a clear day when one can spot the mountains of Lebanon.

The archaeological site is pretty much off the beaten path so you won’t find it busy at all.  You can sit in the black basalt theater, walk the still paved Decumanus Maximus (main road going east to west) of the city in Roman times, stroll down the Cardo Maximus (Colonnaded main road going north to south), wander the ancient ruins that include a basilica, underground mausoleum, and a 16th. century church; and enjoy a meal at the cafe that’s built into the ruins of an ancient building.  You can even visit the small on site museum that houses finds from the area’s excavation; you may have to round up the person in charge to unlock the building.

Umm Quais is one of my favorite sites, the views from the cafe are amazing.  A trip to Umm Quais can be combined with a trip to Jerash, Irbid, and Ajloun.  All are worth visiting!

A trip to Jordan would never be complete without trying all the wonderful food the area has to offer.

Don’t be afraid to try the shawarma and falafel sandwiches being sold on the road; they are amazing not to mention unbelievably cheap!

And then there are the outdoor cafes along the roads, I love the ones in the Shmesani district where the cafes, restaurants, and coffee houses are busy til the wee hours of the night!

For amazing falafel, hummus, and fresh baked bread try out Hashem’s downtown (even the Royals eat there!) or head to one of Abu Jbara’s locations.

For sweet treats nothing beats Habibah.  You can grab some fresh kunafa at the little downtown kiosk where you stand in the alley to eat your delicious cheese pastry or sit down at their new location a block away from Abu Jbara on Medina Street. The new 2 story location is a wonderland of middle eastern and western treats.  You’ll find baklava, kunafa, and maamoul along side ice cream, cakes, french pastries, and chocolates.

If you’re looking for something fancier head over to Reem Alo Bawadi.  The food is excellent and the service outstanding.

What ever you decide to eat you’ll find something for every taste and budget in Amman!  Want more great eats in Amman?  Click here!