5 Must Do Things in Kotor Montenegro 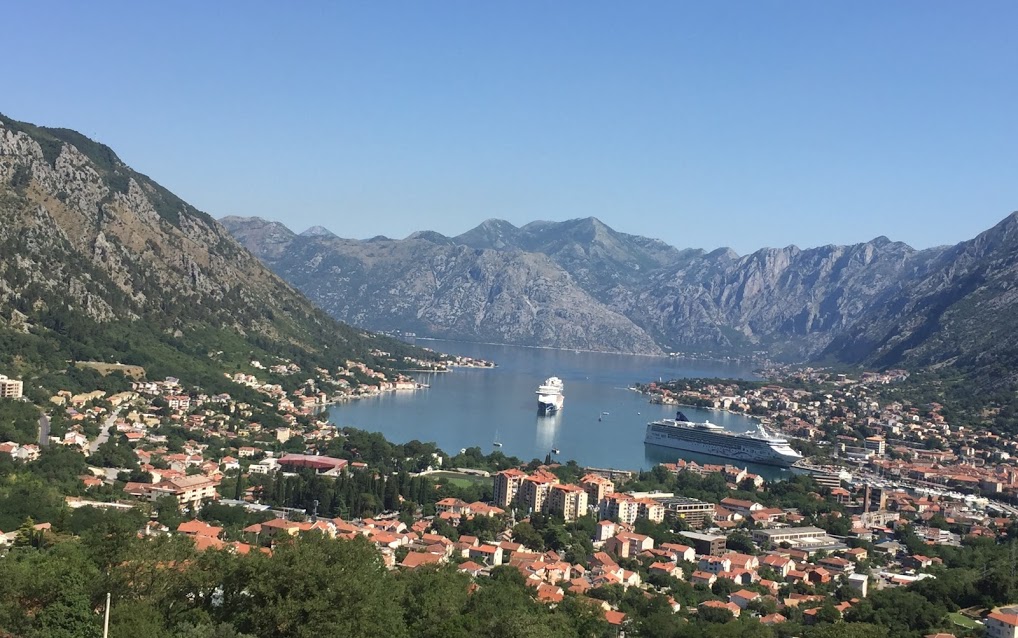 Kotor Montenegró is arguably one of Europe’s hidden gems.  This picturesque town nestled at the foot of Mt. Lovcen is the end point of the Bay of Kotor.  It is a fairly new port of call for  cruise ships sailing the Adriatic Coast.

Montenegró is a new country having gained her independence in May 2006.  It’s tourist industry is just getting off the ground which is great for us tourists.  We were quite surprised to find everything in town very inexpensive.

Kotor, Montenegró although new to the tourist scene is steeped in history.  First settled by the ancient Romans, Kotor was founded as early as the 5th. Century B.C.  It was later fortified by Emperor Justinian in the Byzantine era.

Kotor has deep maritime roots.  Hailed as the center of sailing since the 12th. Century with a rich naval history Kotor  helped build the communities along the country’s Adriatic coast.

In short there are many things to see and do in and around Kotor Montenegró.  Here are my 5 favorite things to do in Kotor. 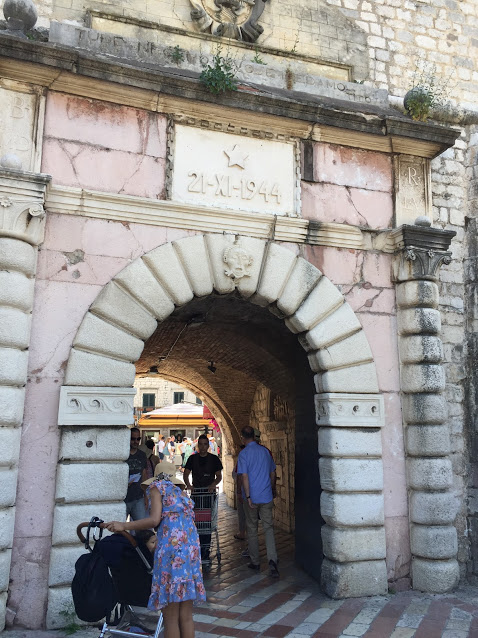 In the Old Town you’ll find St. Triphon’s Cathedral built in 1166, the Church of St. Nicholas built in 1909, as well as other churches, monasteries, palaces, and museums.

You’ll also find the entrance to the fortification that runs up the mountain and protected the city in ancient times.

You can pay the €3 fee and walk up the 1355 steps to the fortress of St. John then hike further up to see other structures and of course enjoy the spectacular view of the town and bay below.

Those not as athletic can enjoy the view by driving to a lookout just out of town.  A taxi will take you up for a few Euro. 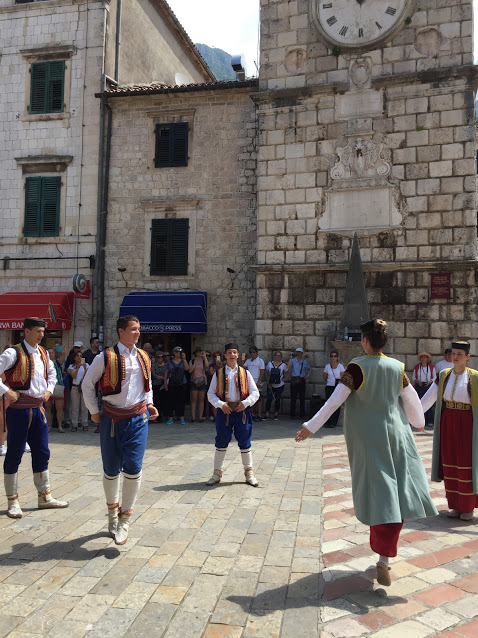 While in the Old Town you might be lucky enough to catch a performance of Montenegrin fold dancers.  They preform in the square right in front of the main gate into town.

Old Town is filled with small squares and alleys where you’ll find restaurants and cafés.  Grab a table and enjoy a glass of wine or better yet a meal.  Kotor is known for great fresh seafood.  [spacer height=”-20px”] 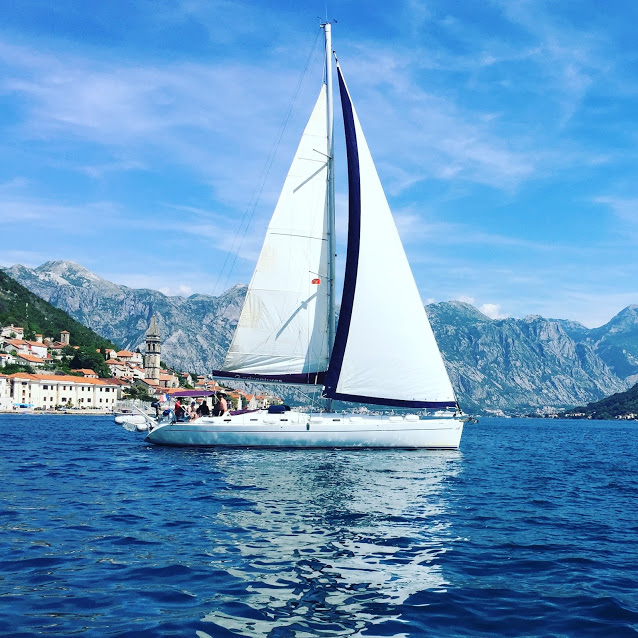 Take a cruise along Boka Bay.

Boka Kotorska or Boka (Kotor) Bay is one of the most indented portions of the Adriatic Seas.  Although it is widely known as Europe’s southern most fjord it’s actually a submerged river canyon.

Picturesque towns line the coasts of the bay as it meanders from the entrance from the Adriatic to its end in Kotor.

You can hop on one of the tourist boats that ply the day all day long, or hire a private boat.  Which ever way you choose this scenic boat ride is a definite must! 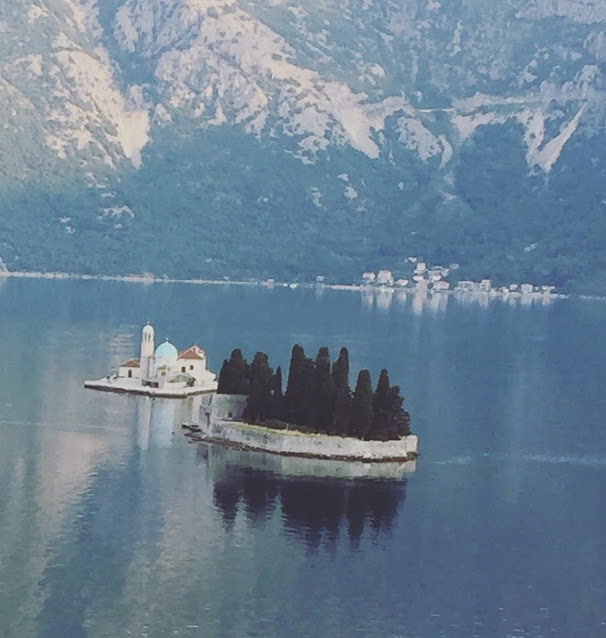 Visit the Our Lady of the Rocks Island.

The church is located in Boka Bay on a man made island of the same name.  It is one of the 2 islands in the bay, the other is St. George.

Legend has it that the islet was built over the centuries by local seamen who kept an ancient oath after finding the icon of Madonna and Child on the rock in the sea on July 22, 1452. When the seamen returned from each successful voyage, they laid a rock in the Bay.  Over time the island was built. The custom of throwing rocks into the sea is alive even nowadays. Every year on the sunset of July 22, an event called fašinada in the local dialect, when local residents take their boats and throw rocks into the sea, widening the surface of the island, takes place. 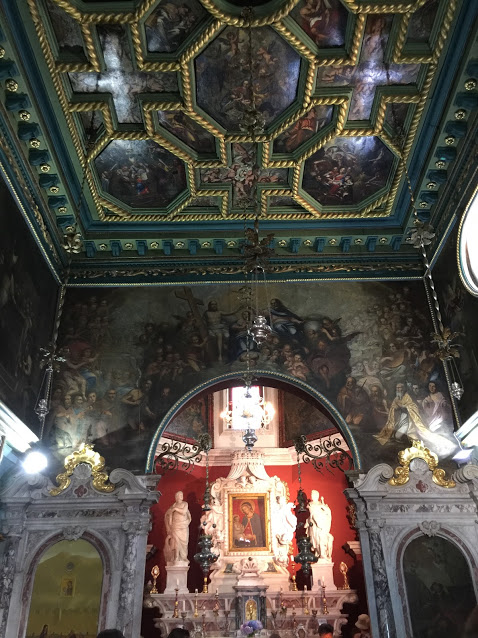 The islet is home to Our Lady of the Rocks Catholic church which houses a museum.  The church display 68 paintings by Tripo Kokolja, a famous 17th-century baroque artist from Perast and a collection of silver votives and paintings by other Italian artists.  The museum displays many artifacts, paintings, and tapestries. 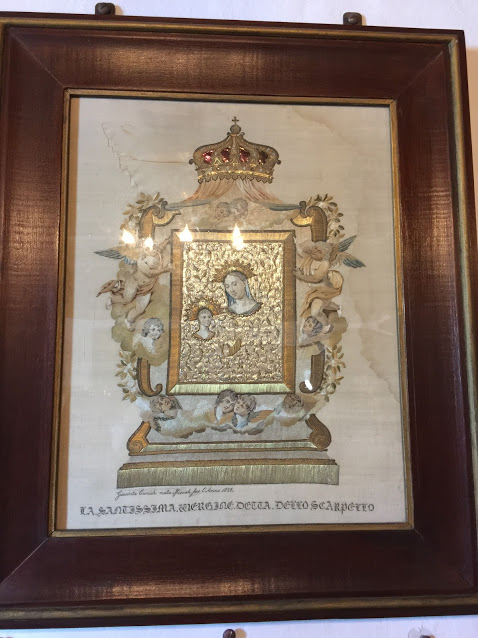 The most famous tapestry was embroidered by Jacinta Kunić-Mijović from Perast.  She embroidered the tapestry while waiting for her husband to return from a long sea voyage.  She used gold and silver thread as well as her own hair.  It took her 25 years to finish this intricate tapestry; you can see the hair she used turn from blond to white. 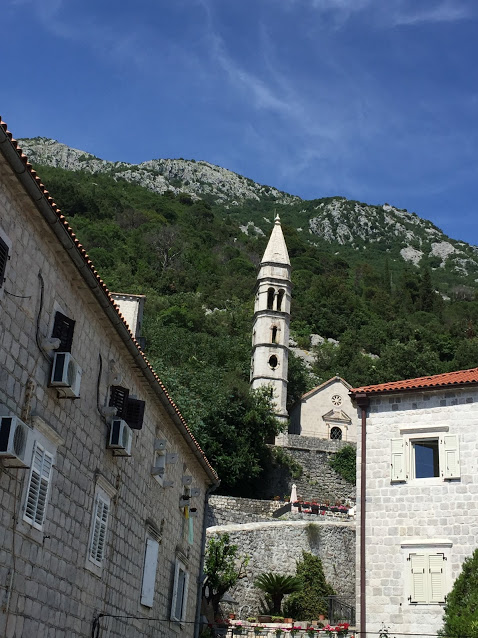 Visit the town of Perast.

Perast is a well preserved Baroque city on Boka Bay.  It flourished in the 1700’s due to its busy shipyards.

It is one of the loveliest towns on Boka Bay.  Its narrow streets and Baroque palaces reflect its inhabitants wealth and luxurious lifestyle in days gone by.

The waterfront is lined with outdoor cafés where you can stop for a cold drink and snack. 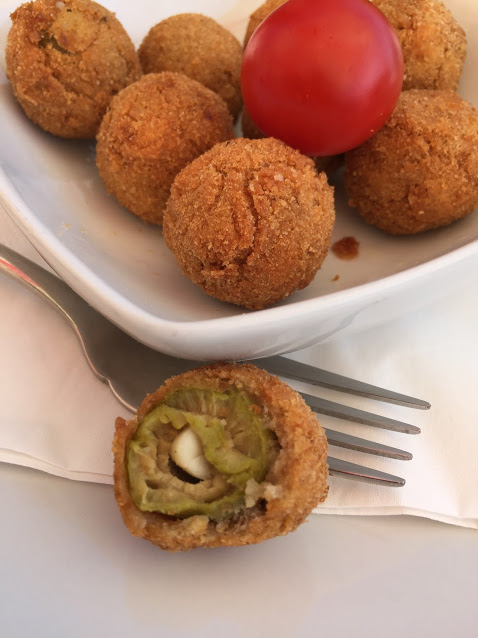 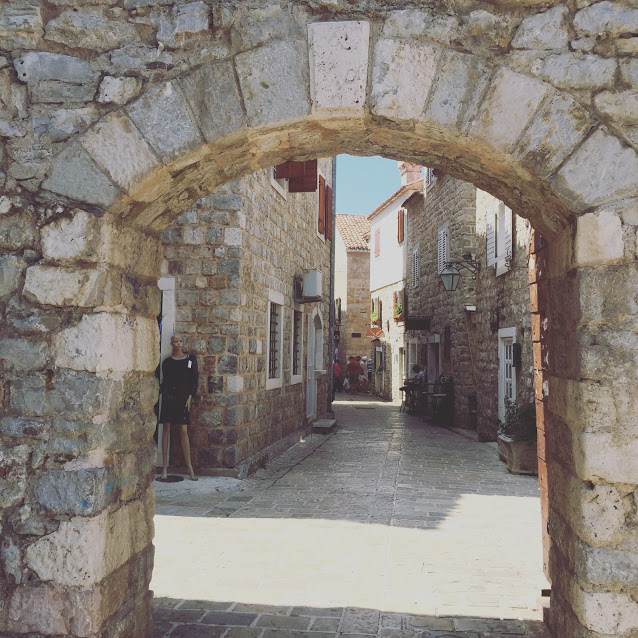 Take a drive to Budva.

Budva is a fortified city on the Adriatic coast.  It’s 2500 years old making it one of the oldest towns along this coast.

Today it’s know for its Old Town as well as its sandy beaches and night clubs some of which are located just outside the town’s ancient walls. 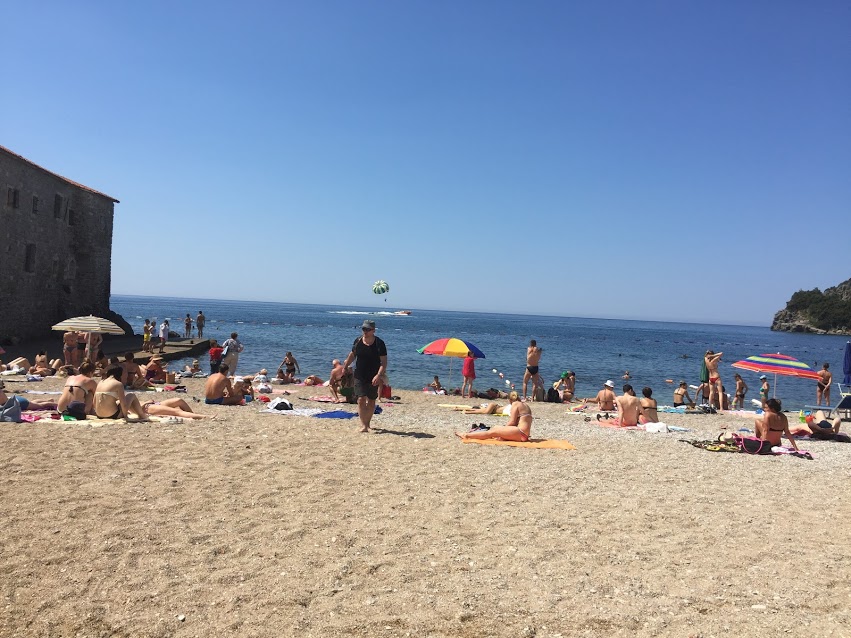 Budva is a center of Montenegrin tourism and is known as Budva Riviera.  It is known has having some of the best beaches on the Adriatic coast and stretches out from the city.

Unlike Kotor, Budva has a more modern feel.  Historical sites are contained within the walled Old Town.  The surrounding areas are sprouting with new hotels, condos, shops, restaurants, and bars.

Located on a wide swatch of sand is Jaz Beach.  It serves as a venue for concerts and festivals.

While in Budva do sit down at one of the restaurants and try an order of Palacinke.  The Montenegrin version of pancakes or crepes.  They can be either sweet or savory filled with anything from jam to ham, cheese, veggies, and even tuna. 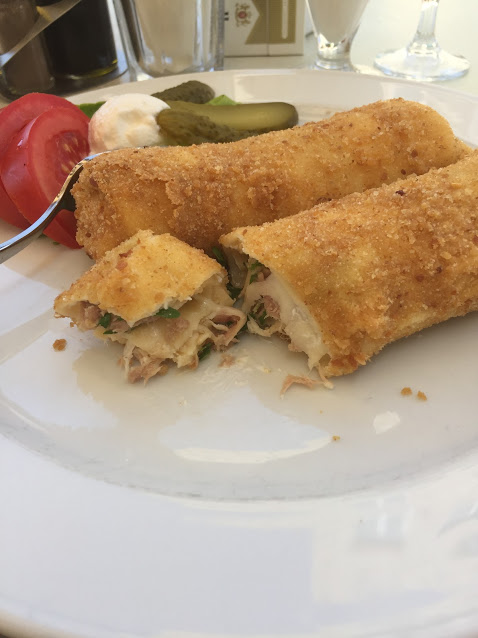 I had the Palacinke Salzburg.  They were delicious!

Getting around Kotor is easy.  There are many modes of transportation.

In Kotor itself there is a public bus that services the town and the coastal villages around the coast.  Tourist can choose to take the hop on – hop off bus that runs all day from Kotor to Risan with stops in Perast and Bajova Kula.  Tickets cost €20 and includes tickets for the Roman Mosaics in the town of Risan, tickets for the Museum of Old Town Perast, and a guided walking tour of Kotor’s Old Town.

Taxis are abundant and reasonably prices.  They offer day tours to other towns including Budva, Njegusi, and Lastva.  We hired a taxi for 4 hours and headed to Budva, it cost us €40.  Our driver spoke English very well and doubled as a tour guide.

But since most everything around Kotor centers around the bay the easiest way to get around is by boat.  You can take one of the boat tours sold around town or hire a private boat and explore the bay at your leisure.

Ready to plan your trip to Kotor Montenegro?  Let Savvy Nana Travel help you plan your dream vacation!  I specialize in cruises and custom itineraries, what ever your interest and your budget I’m sure I can help you plan the perfect vacation.