Barcelona – 10 Things Not to Miss in Barcelona

Barcelona is the cosmopolitan capital of the Catalonia region of Spain.  Barcelona is known for its architecture and art, and of course Catalan cuisine which is not the same as Spanish cuisine.

Located on the Mediterranean Sea, Barcelona is blessed with sub-tropical climate and is pleasant year round.  It is a favorite port for cruise ships on the Med route.  It’s a lively city filled with whimsical architecture, world class sports venues (it did host the 1992 Summer Olympic Games), beautiful theaters, bustling plazas, fashionable shops, trendy bars, and outstanding restaurants.  In short there is something for everyone in Barcelona, it’s one of my favorite cities!

You could spend a week in Barcelona and still not see it all.  Here are 10 must do things in and around Barcelona!

Everyone who goes to Barcelona ends up wandering around La Rambla.

La Rambla is a tree lined pedestrian street in the heart of the city.  It connects the Passeig de Colóm (Columbus Monument) to the Plaça de Catalunya.

The 1.2 kilometer street is lined with street vendors, restaurants, bars, and shops.  It’s a favorite with tourists and locals.

There are many side streets branching along La Rambla that will lead to more Plaças and cool neighborhoods.

Don’t forget to grab a table at one of the outdoor restaurants for a snack or beverage.  It’s a great place to do some serious people watching.

But to stay alert on La Rambla.  Like many crowded areas in any city La Rambla is a hot spot for purse snatchers and pickpockets.

Mercat de Sant Josep or more commonly known as La Boqueria is a huge public market with an entrance on La Rambla.

You can eat your way thru La Boqueria at very reasonable prices as you gawk at the colorful displays.

The market can get pretty crowded so stay alert and hang tight to your belongings![spacer height=”-20px”]

One of the entrances to this plaza is right off La Rambla, so it’s not hard to find.  If you exit from the gate by the Philippine Consulate you’ll end up in the heart of the Gothic Quarter.

Plaça Reial is busy pretty much most of the day, but it gets busier in the evenings where everyone makes their way there to eat, drink, and be merry.

Grab a seat and order a pitcher of Sangria, you deserve it after a day of wandering.  It’s a refreshing way to enjoy the evening and people watch as you sip! 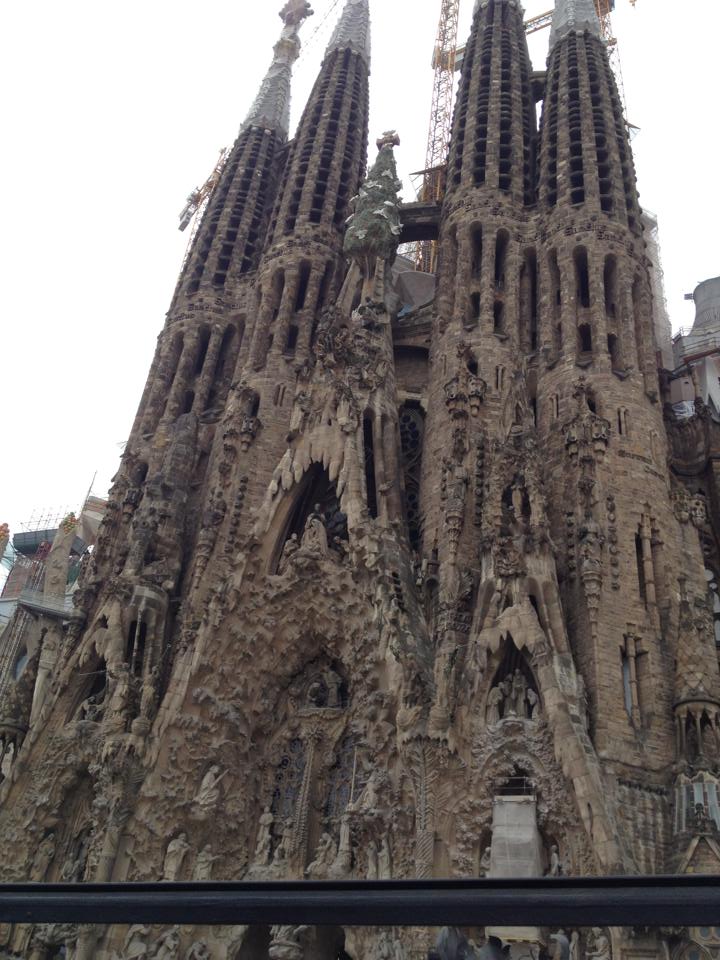 The Sagrada Familia is a large unfinished Catholic church.  Construction began in 1882 under architect Francisco Paula de Villar who quit a year later.  Antoni Gaudí took over in 1883 and worked on it until his tragic death in 1926.  Even though Gaudí worked on the church for 43 years the project was less than a quarter complete at the time of his death.

Relying solely on private donations progress on the church construction is incredibly slow.  The plan is to finish construction by 2026, a hundred years after Gaudí’s death.

The Nativity façade and the crypt of the Expiatory Temple of the Sagrada Família were named UNESCO Cultural World Heritage in 2005.  They are part of the collection of sites that UNESCO calls “Works of Antoni Gaudí”

Today the church is open daily from 9:00 am to 6:00 or 7:00 pm depending on the time of year.  Tickets to the church can be purchased online and start at €15 per person for the basic ticket.   Guided tours and visits to the towers are not included in the basic ticket.  Click here for more ticket info and to purchase tickets.

You’ll find a few vendors and cafes right outside the Sagrada Familia.  If you’re tired an outdoor table at one of the cafes is perfect to rest and relax with a view of the beautiful church. 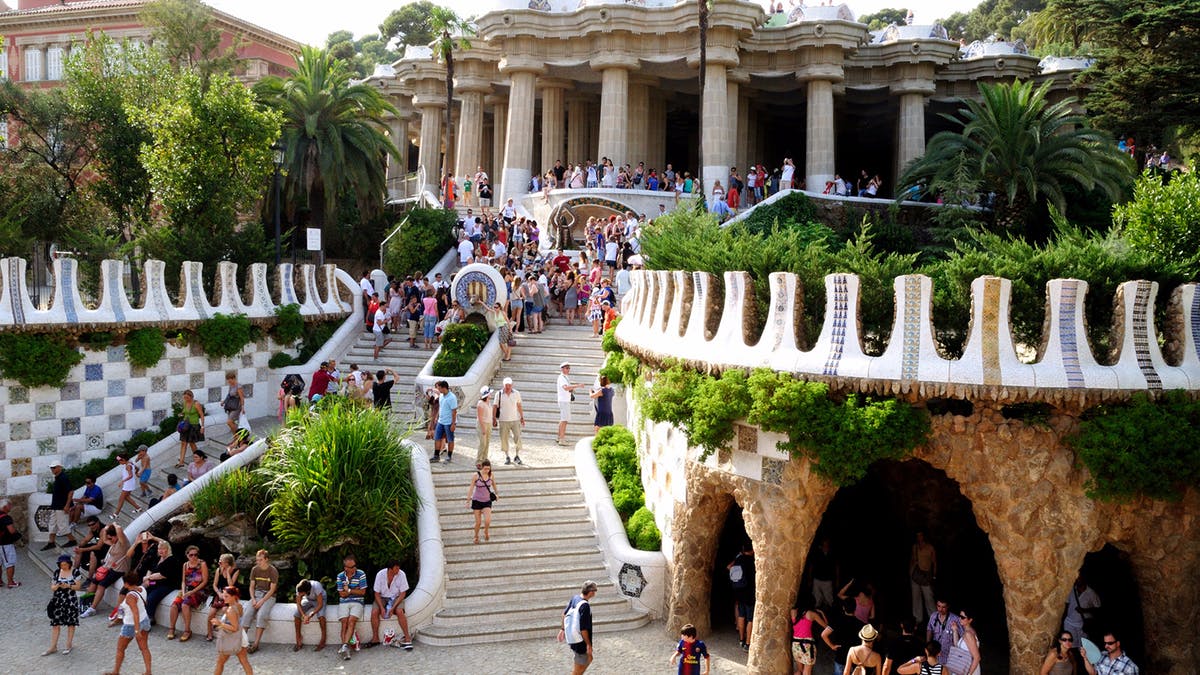 This public park is one of Antoni Gaudí’s major works in Barcelona.  It’s a UNESCO World Heritage site and is part of the “Works of Gaudí”.

It’s a delightful place with gardens and whimsical statues and structures.  It’s definitely worth the visit. 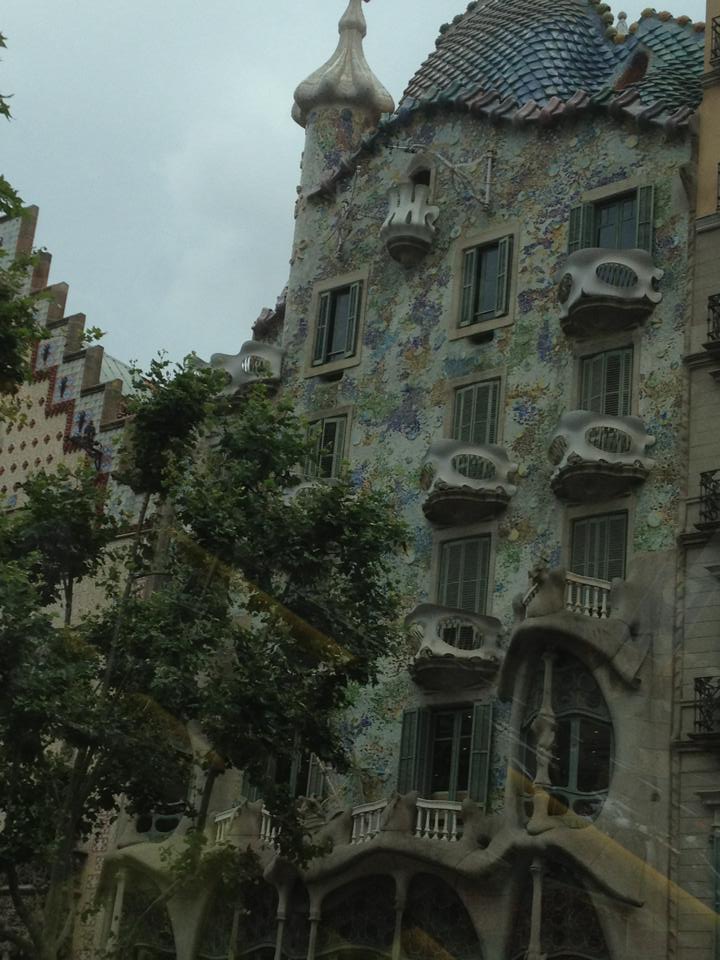 Located in the heart of Barcelona is’s Casa Batlló.  It is one of Gaudí’s masterpieces.  Gaudí began renovation on this private home in  1904 and finished in 1906.  It has gone thru several restorations since, always preserving this architectural treasure.

I have to admit this is one of my favorite buildings in Barcelona.  I love the “scaled” roof that resembles a dragon in my eyes.  It’s truly a testament to Gaudí’s creativity!

Today the owners open the doors to the public and also rent out spaces to be used as event venues.

Click here for more info and to purchase tickets online. 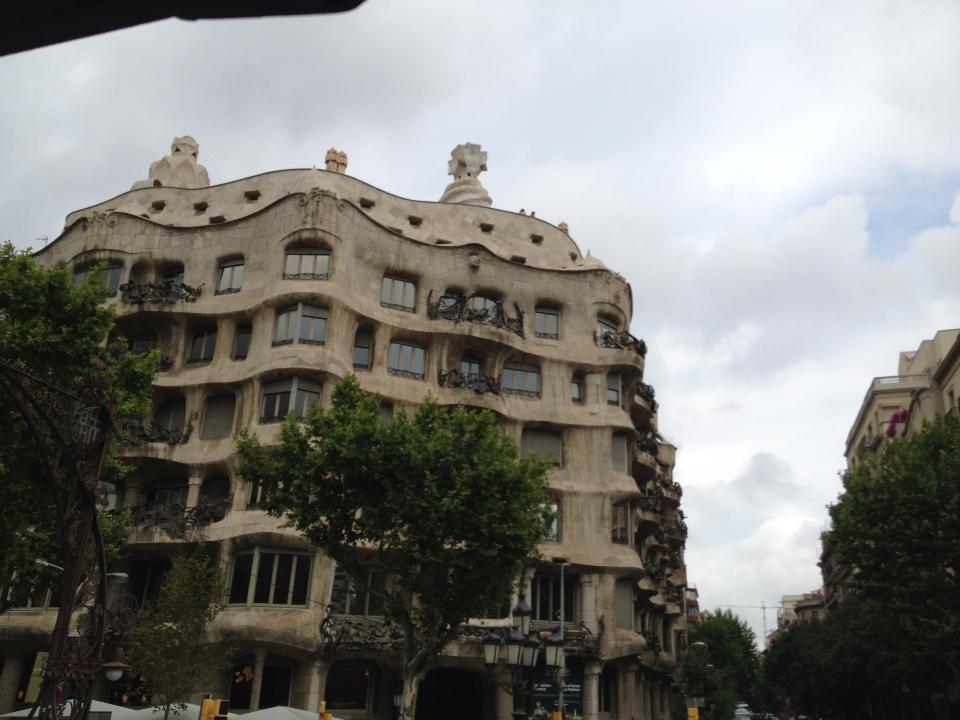 Casa Milà or more popularly call La Pedrera (Stone Quarry) is yet another Gaudí masterpiece and UNESCO World Heritage Site.  Located not far from Casa Batlló this building was designed and constructed by Gaudí between 1906 to 1912.

Today it is home to the cultural center with spaces for exhibitions and other public uses.  It of course show cases the works of Gaudí,

Click here for more info and to purchase tickets online. 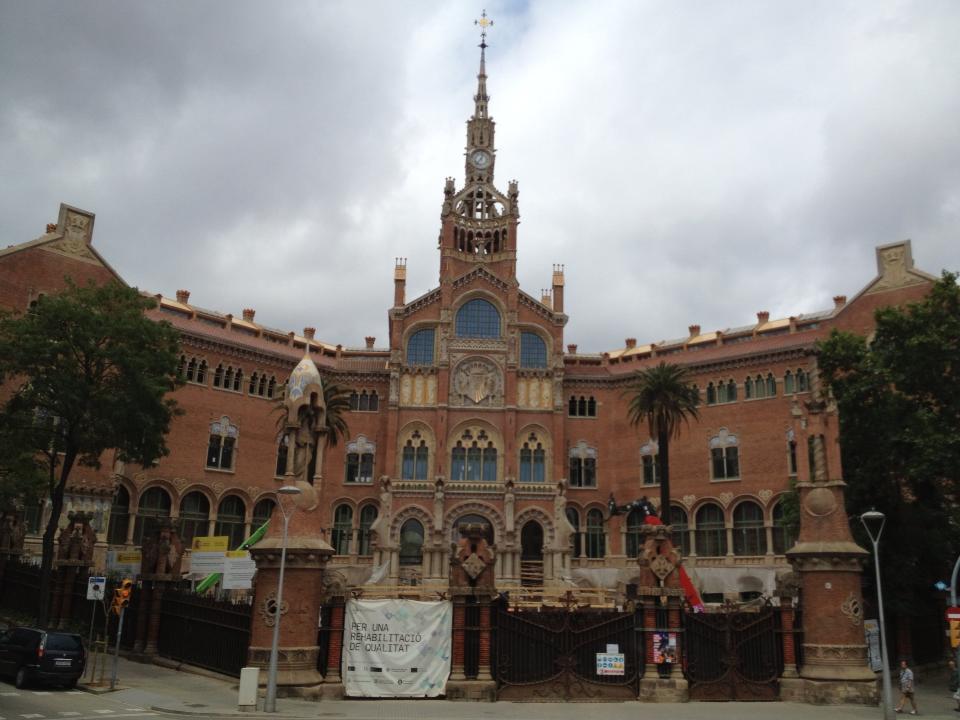 The Hospital de la Santa Creu i Sant Pau came to be in 1401 with the merging of 6 hospitals in the city.  The original building is one of the  most important examples of Catalan Civil Gothic architecture.

The new hospital, designed by Lluís Domènech i Montaner, was laid on 15 January 1902, though the new facilities would not be opened until 1930.  This was built in the Modernista style.  The hospital complex was used until 2009 when it moved to the new complex. 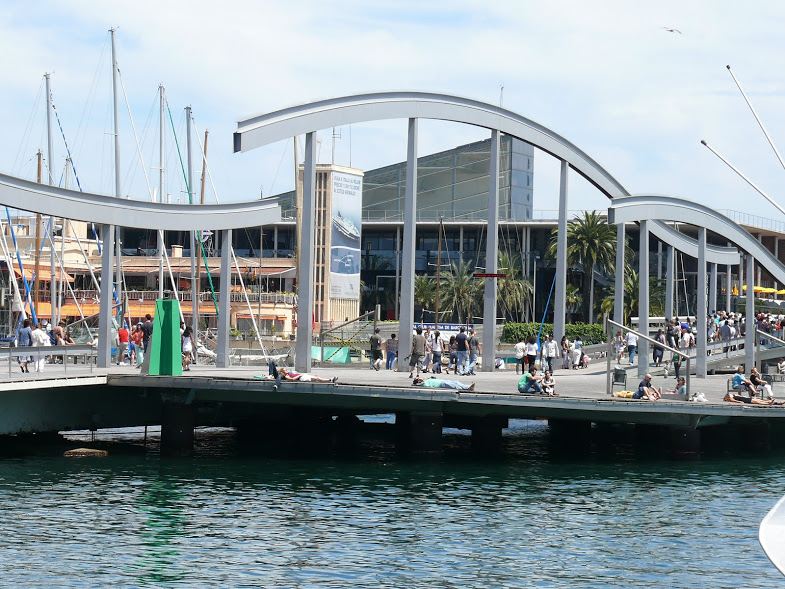 For more info on hours, activities, and tickets click here.

Head to the seaside neighborhood of Barceloneta for some sun and surf.  There are beaches along the coast.

The area is also known for the nightclubs and restaurants along the boardwalk.  You can get some of the best seafood paella at one of these restaurants.

It’s a fun place to hangout for families during the day, and for those who love the nightlife!  [spacer height=”-20px”] 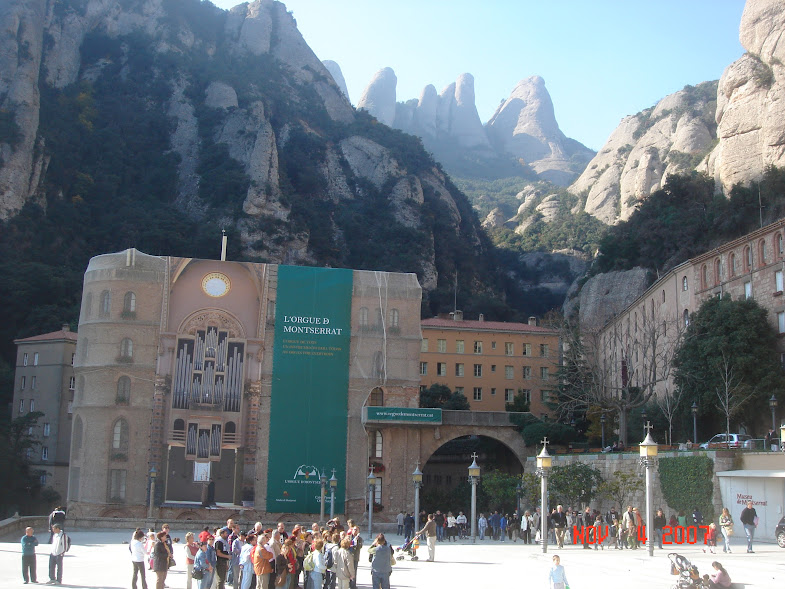 Located just 30 miles from Barcelona and accessible by car, train, or cable car, the Santa Maria de Montserrat is definitely worth a half day trip.

Nestled in the crags of the mountain of Montserrat this Benedictine Abbey was founded in the 9th. Century.  It still functions as a monastery to day housing about 80 monks.

The abbey is home to  Virgin of Montserrat (the black Madonna), who is Catalonia’s favourite saint, and is located in the sanctuary of the Mare de Déu de Montserrat, next to the Benedictine monastery nestling in the towers and crags of the mountain. The Escolania, Montserrat’s Boys’ Choir, is one of the oldest in Europe, and performs during religious ceremonies and communal prayers in the basilica.

The setting and the buildings are amazing!

Ready for a trip to Barcelona?  Let Savvy Nana Travel help you plan!  We specialize in custom travel itineraries for families, couples, and groups.  If you can dream it, we can  plan it!