What Does the Phrase “VIVA PIT SENYOR!” Mean in Cebu? 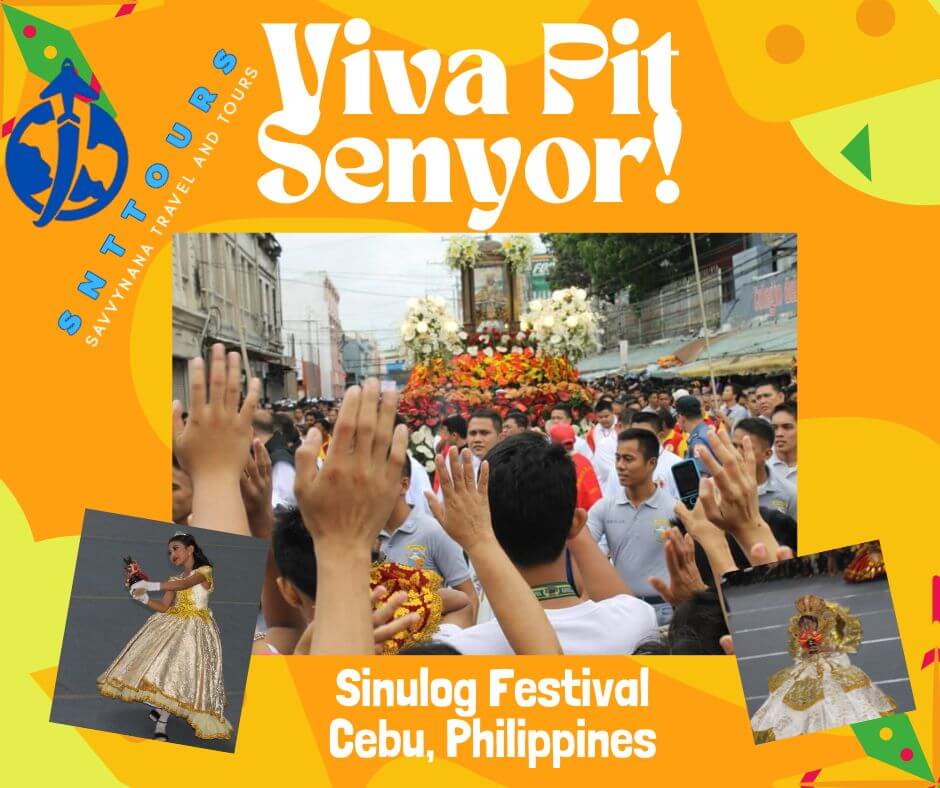 The Philippines’ love of Sto. Niño predates the history of Christianity in the country. In 1521, Queen Juana was baptized with her husband, King Humabon, in Cebu. As a result, Magellan included the image of Sto. Niño in the image he gave her afterward. Magellan died during the battle of Mactan; there was no further effect on the evangelization process for the people of Cebu after this. After 44 years, the Spaniards returned with Miguel Lopez de Legazpi as head of the expedition.

They found an image of Sto. Niño in their possession. Finding the image of Sto. Niño on April 28, 1565, became a feast day celebrated by the people. They celebrate the feast of Child Jesus in honor of His Most Holy name. During the Sinulog festival, participants chant “VIVA PIT SENYOR!” and “VIVA SEÑOR SANTO NIÑO!” It’s a tradition that stems from a specific tradition during the fiesta. It can be heard during mass or when traditional Sinulog dancing takes place in the Basilica.

And, it can even be seen by participants when they make shouts of this phrase during the Sinulog procession. While the meaning of a popular saying is often lost on people, many don’t understand what it means when they hear it every time the feast of Sto. Niño de Cebu is celebrated. Below is a list of its historical, cultural and biblical definitions.

The word Santo Niño means “Holy Child.” The Spanish word santo nunyo refers to the child Jesus born in Bethlehem. It is a title used to refer to the child Jesus, instead of a religious figure declared by the church. During the celebration of Sto. Niño, believers are not worshipping the child Jesus in any way. Sto. Niño’s childhood and infancy should be remembered every year with a feast. This is true honor and glory to Him. Spanish speakers refer to anyone who supports them as their patron. This word comes from the Latin root patron, which means “protector” or “defender.” The title of patron belongs to Sto Nino, as he is our protector and defender. The Sto. Nino devotion looks at the childhood of Jesus Christ. At the moment Jesus was born, people began to honor him by adoring him. This included the shepherds and lambs who were present when Mary bore Jesus on a manger.

“Viva” is a Spanish word that means “to live” and can be used to express enthusiasm or support. A person can say viva, which means “to live,” when expressing their support for Jesus as the Holy Child. Viva Señor Santo Niño is essentially saying “Hurrah for Jesus!”

The word “pit” is a contraction of the phrase “sangpit.” This Cebuano word means calling out loudly to God or someone with a specified intention. It’s usually used when someone visits a home but no one’s there. Someone might say pit when they’re far away and can’t see who they’re addressing their message to. When someone says pit, they need to have a request, appeal or intention that the recipient can grant or deny. When one prays and shouts “VIVA PIT SENYOR!” in a public place, they’re making an appeal from a distance. People wouldn’t approach God with a request; they’d humbly proclaim their thoughts. This prayer is similar to someone crying out loud and looking to the sky with hope that God hears and answers.

In Spanish, the honorific Senyor or Señor means “Lord.” Children addressing Jesus are said to honor Him as Lord because of His authority over them. It’s important to understand the difference between the Spanish words Señor and Senior. Seniors are people who are given respect or reverence due to their age. For example, a Senior Citizen is someone who has aged out of childhood. When we shout these phrases during the Sto. Niño feast “Sinulog Festival” every third Sunday of January, we understand their significance. These words are our way of affirming faith in a supreme creator. By inviting us to be His children, Jesus bestows upon us the message of humility.

Consequently, these phrases are prayerful prayers that are short in length yet rich in meaning and faith. During our time at the fiesta, we are invited to participate in church as one community through prayer. While we are watching the participants dance and sing, we’re not watching a show; instead, we’re witnessing an invitation to join in communion with fellow believers.